We all know that coffee has been our fall back when we lack sleep, and, at least for the ladies, chocolate has been our emotional support.  It turns out that our “go-to” may be helping our brains as well.  Maybe the answer to creating superhuman smarts lies in coffee and chocolate.  Take that A.I.’s!  Can coffee and chocolate increase your intelligence?  Here’s what researchers reveal.

Coffee and Cocoa: The chemical correlation to brain health

When we think of any chemical that coffee and cocoa have in common, caffeine is what comes to mind.  We tend to lump all of the benefits to coffee to just caffeine, and with cocoa or chocolate, we may remember different reports regarding flavonoids.  Yet, both have other chemicals that have proven to both boost our cognitive ability and protect our brain.

Coffee as a cognitive booster and protector

Coffee contains 6 active ingredients that all contribute differently to our brain health.  Caffeine is but one of them.  All 6 chemicals are:

It contains an alkaloid called methylxanthine.  It is believed that this chemical in caffeine interrupts the adenosine receptors or the receptors which tell us when to go to sleep.  This interruption comes from the central nervous system. Indeed, it is what delivers temporary alertness, focus, and better memory after we drink a cup of joe.  This interruption also permits dopamine to stay in the system longer, providing us with a steady dose of feeling good.  When a person drinks too much coffee, however, it results in irritability and nervousness.

This is a chemical found in green coffee beans or unroasted beans.  Once the beans roast, the chlorogenic acid virtually disappears.  Many believe it’s an aid in reducing the absorption of carbohydrates in our digestive system, lowering our blood sugar and insulin production.  Some studies on rats also demonstrated an ability to reduce fat absorption and storage.

This acid is produced as chlorogenic acid is broken down in the roasting process. It aids in the production of tryptophan and nicotinamide in the gut, which is essential for DNA repair.  When mixed with gut bacteria, it can be converted to either of those as well.

This acid is where scientists believe some of the antioxidant properties of coffee originate.  Caffeic acid is part of the polyphenol family.  They are renowned for their antioxidant and anti-inflammatory properties.

Another polyphenol and flavonoid.  It is contributing to the antioxidant, anti-carcinogenic, antiviral, and anti-inflammatory properties of coffee.  It is also recognized for preventing lipid degradation from free radicals, allowing for blood clotting, the flow of nutrients through the blood vessel walls and to stimulating the mass formation of mitochondrial.

This chemical has recently been found to act as a dual inhibitor on two major proteins, which have been linked to Alzheimer’s disease and Parkinson’s, Amyloid B, and Tau.  These proteins work together to create plaques on brain neurons and then tangles the synapses which connect the communication process between the neurons. Amyloid B becomes toxic and feeds off of Tau to create a toxic loop that kills or diseases neurons. This effectively shuts down how the neurons work to allow you to process information, communicate, access your memory, and more.

The coffee cocktail for improved cognition

While the active chemicals listed above each are recognized for certain traits, how they all come together or how each becomes most affective is still being researched.  Various studies have identified possible correlations.

In the case of phenylindane and the inhibition of the two proteins linked to Alzheimer’s disease and Parkinson’s disease, a recent study demonstrated an interesting factor. A study in Frontiers in Neuroscience, performed by Donald Weaver and partners at the Krembil Research Institute in Toronto, ON, Canada discovered that the production of phenylindane correlated with the roasting process.

The longer coffee beans roast, the more phenylindane produces, demonstrating that dark roast coffees contain the highest concentration.   Whether the coffee was caffeinated or decaffeinated did not appear to be a factor in its effectiveness. Thus, science rules out caffeine as a contributor.

Scientists injected mice with rotenone and then treated with caffeic acid and chlorogenic acid to test for effects.  They discovered that acids enhanced the antioxidative response of glial cells,  thereby preventing the rotenone from creating degeneration in the brain.

Overall, the dominant chemicals in coffee or caffeine-related substances have shown to boost cognitive function, protect neurons through an antioxidant response, and decrease inflammation.  The healthier our neurons are, the better our plasticity can be in making new connections and learning. 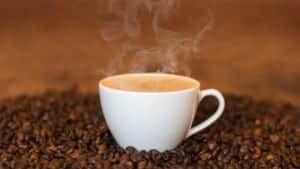 Chocolate, specifically dark chocolate or cocoa, has all the same wonderful benefits that we gain from caffeine. Plus, it adds a bonus–flavanols from the family of flavonoids.  Flavanols operate as both anti-inflammatories and antioxidants.

Flavonoids are able to cross the blood-brain barrier and store themselves in areas of the brain which affect learning and memory, such as the hippocampus, cerebral cortex, cerebellum, and striatum.  The flavonoids can directly communicate with neurons and synapses in the brain. This serves both to protect and enhance by either boosting the production of proteins to make new neurons or protecting the ones that already exist.  This ability lends itself to aid in the potential of preventing Alzheimer’s or Parkinson’s disease.

Researchers already prove that flavonoids add to heart and vascular health.  Healthy blood flow is not only necessary for the body, but is also crucial to the development and health of our brain as well.

One study sought to research the effects of cocoa on our cognitive function in the area of attention, memory, and executive function. Valentina Socci of Italy’s University of L’Aquila led the study. He and his team analyzed various past studies and analyzed the results.