We humans are not the only species that must contend with the tragedy that is cancer. Even clams and other tiny aquatic life can get cancer. It is cancer in dogs and cats–our companion animals–that really hits home.

Cats develop cancer at a rate of about 1 in 5. In dogs, this rate is even higher. According to the National Canine Cancer Foundation, 1 in 3 dogs will get cancer at some point in life. Cancer is also the leading cause of death in dogs over age 10.

In this article, we are going to list 12 signs of cancer in dogs that we should never ignore. To cap things off, we’ll discuss a simple yet comprehensive exam that you can give your dog. If you see these signs in your pet, you may bring your dog to a vet for animal critical care services.

12 Signs of Cancer in Dogs

If your dog seems to collapse or faint, you should contact a veterinarian immediately. Per the website Vetsnow, “Acute [serious] collapse in dogs is a sudden loss of strength, that causes them to fall and be unable to rise.”

Symptoms that may precede collapse include diarrhea, disorientation, staggering, vomiting, and weakness. There are two classifications of collapse or faint in dogs: hand limp collapse or complete collapse. The former entails the dog falling to the ground in a sitting position; the latter, a lying position.

The dog should be examined by a vet immediately.

Fatigue and exhaustion are two common, similar symptoms associated with cancer cachexia. Cachexia is a metabolic condition and sign of potential cancer in dogs. Other potential co-symptoms of cachexia include impaired immune function, loss of appetite, and weight loss.

To rule out cachexia stemming from cancer, it is necessary to have the veterinarian conduct an examination. Once she has ruled out cancer, your vet may prescribe medication and suggest dietary changes.

Take your pet to the vet for an immediate examination.

Dogs only rarely cough, so when they’re coughing regularly, there may be a cause for concern. Known causes of canine cough including:

– “reverse sneeze” (caused by irritation of the nasal passages)

– cancer (typically of the heart, lungs, and respiratory tract)

The dog should be examined by a vet immediately.

Occasional diarrhea is probably not something to worry about. However, persistent and worsening diarrhea is a common symptom of cancer in dogs as well as other illnesses.

Other related symptoms that may signal health troubles include difficulty peeing or having a bowel movement, blood in the urine or stool, and vomiting.

If your dog has had abnormal peeing or bowel movements for some time, it is recommended to visit a vet immediately.

Per PetMD, eye or nasal discharge is more likely to be a sign of cancer in middle-sized to large dogs with elongated noses.

As the causes of an eye or nasal discharge tend to be serious, a visit to the veterinarian should be in order.

Signs of possible oral cancer include swelling of the jawbone or gums. Bleeding, inflammation or darkening around orifices is also common. The swelling of the gums, tongue, or roof of the mouth is the most frequent symptom.

Other possible symptoms of oral cancer in dogs include bad breath, difficulty eating, drooling, facial swelling, lack of appetite, loss of teeth, panting, and swelling of the lymph nodes.

Your pet should be examined by a vet immediately.

Nosebleeds in dogs can be a sign of a serious problem. The underlying cause is often epistaxis, a condition resulting from the body’s inability to clot blood. An infection may also be present.

In older dogs, nosebleeds are commonly a sign of cancer. Tumors will often grow gradually in the sinuses over a long period.

An immediate trip to the vet is needed to run necessary tests to pinpoint the cause of nasal bleeding.

Just as in humans, dogs with cancer may experience bodily (and emotional) pain. The pain most commonly associated with cancer is a general, achy feeling, especially in the area(s) where the tumor is present.

Specific types of cancer produce pain the certain areas. For example, bone cancer pain may be localized to certain bones of the body.

As canine pain can be both a cause of severe suffering and a sign of a potential disorder, a trip to the vet is highly recommended.

The most common cause of seizure in dogs, however, is idiopathic epilepsy, an inherited disorder for which the exact cause is unknown.

Other diseases may also cause skin changes. Your vet will order a laboratory examination to determine the exact cause. For this reason, the dog should be immediately seen by a vet.

Gastrointestinal tumors are a type of cancer that may cause dogs to stop eating – and therefore lose weight.

To determine an exact cause, a veterinarian must administer a CT scan, CAT scan, or x-ray.

On the opposite side of the weight spectrum, a sudden increase in weight is often a common sign of cancer in dogs. Weight gain with illness is particularly noticeable, as the dog will often eat less and still gain weight.

Again, a trip to the vet – and imaging tests – are needed to determine the root cause. 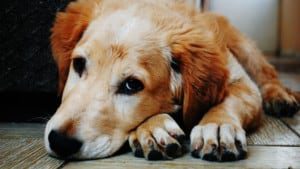 Final Thoughts: Check for Cancer in Your Dog

The Carlson College of Veterinary Medicine at Oregon State University lists 11 areas of a dog’s body to examine in their “check your dog” campaign.  Notice that the check, which dog owners may administer themselves, progresses from the tip of the nose to the tip of the tail for easy memorization.

The 11 areas to examine are:

Examine the dog’s nose for debris, excessive drainage, or lesions. Also, note whether the nose is wet or dry. The ‘wetness’ of a dog’s nose will typically progress from moist to dry throughout the day. Check the symmetry of the nose and note any visible differences between sides.

Check for any abnormal eye discharge, noting any increase or decrease in amount. Pet ‘weeping’ caries from one pet to another. Examine the symmetry between the eyes, including active movement, color, discharge, and shape. Look at all parts of the eye, including the whites. Note any color change, including any increased graying or redness.

Check your pet’s mouth for any (abnormally) bad breath, lesions, and swelling. Healthy canine gums are pink, and their teeth should be free of plaque and tartar. Examine the symmetry of the nose and note any differences between sides.

Outside of the mouth, the dog’s jawline should maintain a constant texture along the entire length of the jaw. There should be no sensitivity to touch along the jaw area, and it should be the same on both sides of the mouth.

Check the ears for any irregular debris, odor, or swelling.

Brush the dog’s hair back and check the coat and skin. Check for excessive bumps, lumps, and flakiness. Also note any changes to the skin’s color, including any dark or red spots. Pay careful attention to both sides of the spinal cord.

Examine the dog’s muscle tone and weight. If the dog is overweight, try to rectify the issue. As in humans, a disproportionate amount of fat held at the core increases the risk of health problems.

Check for areas of the legs that are sensitive to the touch. Next, check the legs for any skin abnormalities, including bumps, dryness, and swelling. Also, check the range of motion of the joints. All joints should be relatively flexible and free of discomfort.