Bullying is as old as humanity and rises from a single primordial source: fear. Fear is a common emotion for everyone and everyone deals with their own fear in different ways. Some ways are healthy and rational and some are destructive and harmful. A bully, at heart, is afraid. They are insecure in their feelings about themselves and so they fight that fear by causing fear in others. Anyone has the capacity to be a bully if they are fearful enough.

Here are 8 hidden behaviors of a bully (and how to avoid having them):

Do you see these red flags that might reveal a bully? 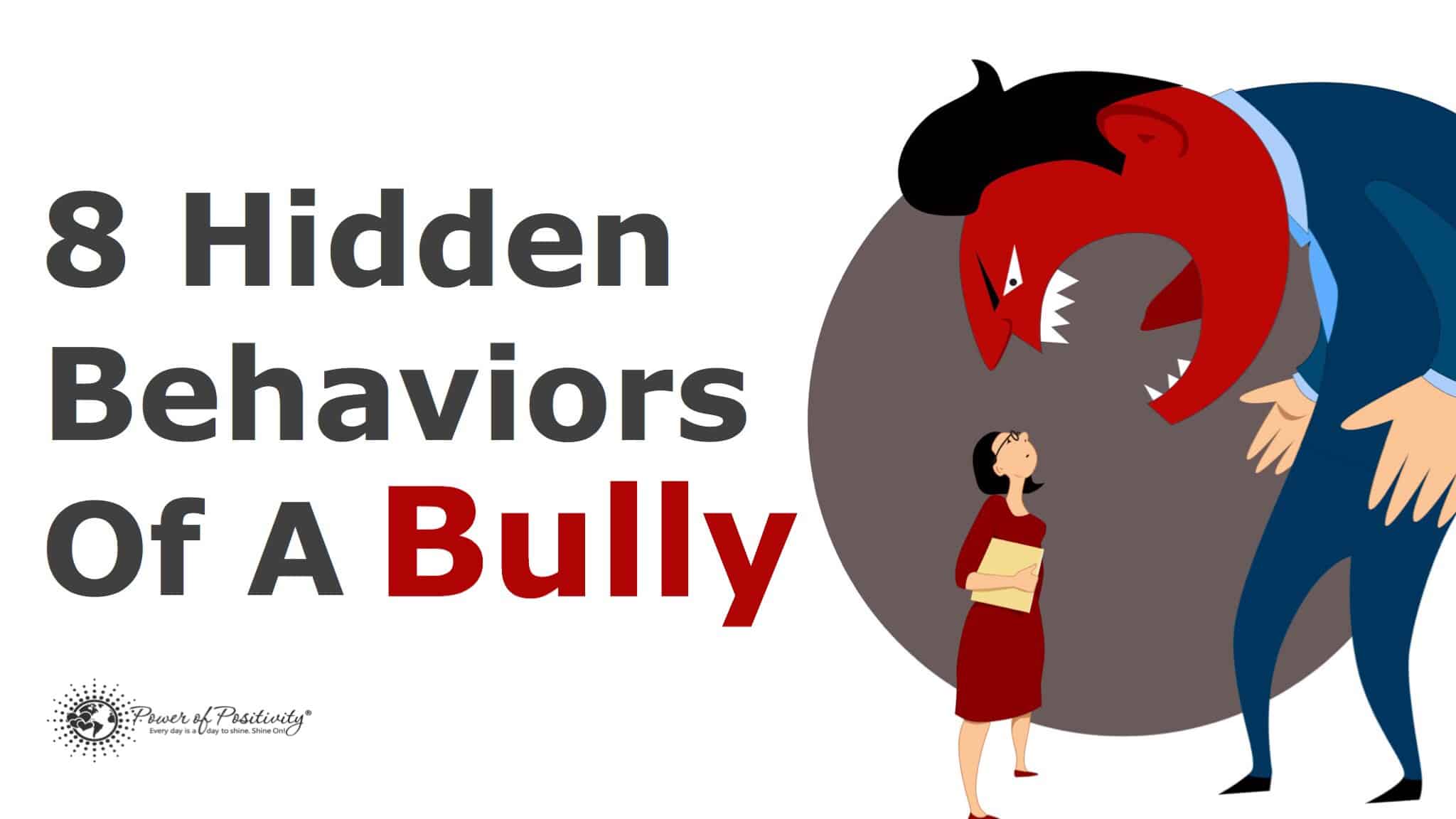 1. A Need To Control And Dominate Others

People are afraid they aren’t good enough, strong enough, smart enough or powerful enough, and so they feel the need to prove to everyone, especially themselves, that they are. They seek to control everything and everyone because they feel that their lives are out of control, or they feel that someone can hurt them if they don’t have complete control of a situation. They seek to dominate others in order to make sure that no one can rise up and hurt them.

The best way to deal with this is to confront your own inner fears about your self-worth. Confront the individuals in your life that made you feel unworthy or insufficient. Identify your control issues and find the underlying reason you feel the need to control everything and everyone around you.

Part of a bully’s fear of being out of control is that their own emotions are not completely in their control. They may be emotionally unbalanced or under a lot of emotional strain and lash out more frequently because of this.

In order to deal with this, you need to find the underlying cause of your anger and deal with that. Anger management classes and finding other ways to deal with powerful emotions can help control those emotions better.

Anger and fear can override our better judgment and eliminate obstacles to acting on those emotions. People with poor impulse control struggle to control just about every emotion. There are fewer mental breakwaters to drain the power out of a tsunami of emotions. When a powerful emotion like fear or anger rises up, there is very little within a bully’s mind to slow it down and prevent them from acting on that emotion.

Confronting the fears themselves will help with this as will attending anger management classes. Being able to recognize when you are getting dangerously angry and then leaving that encounter before things get out of hand is also a good skill to learn. Preventing incidents is much better than dealing with the aftermath.

4. Lack of Empathy For Others

Dehumanizing someone makes it much easier to inflict mental or physical violence on someone. When a person you are dealing with ceases to be a person and instead become merely an obstacle to your will, then you are dehumanizing them. When you mentally categorize that person by their job instead of by their name, then you are dehumanizing them. It is easier to cuss out the customer service representative than Sally who has two kids and works two other jobs to make ends meet since her husband got sick with cancer.

You can stop a situation from escalating by recognizing that the obstacle in front of you is a person with their own issues they are dealing with. Try to understand that they may be having a crappy day just like you. When you can connect to another person’s situation, then you are less likely to mistreat them.

People are social creatures and it is easy to identify with a group. It is an instinct to sort ourselves out into “tribes” and anyone who isn’t one of “us” is a threat. Religious, political, economic and social groups can easily dehumanize and demonize members of opposing groups because they are part of another “tribe.” This stems from fear of the other and from anger at perceived grievances between groups. Social media has taken this to the extreme with “manufactured outrage” whereby you stir up the emotions of one group against another group in order to make money.

When you accept those that are different than you and understand that everyone sees the same things from different points of view, then you can try to find common ground and meet in the middle. Instead of jumping to conclusions about someone’s opinions or beliefs, try to understand why they believe those things in the first place. 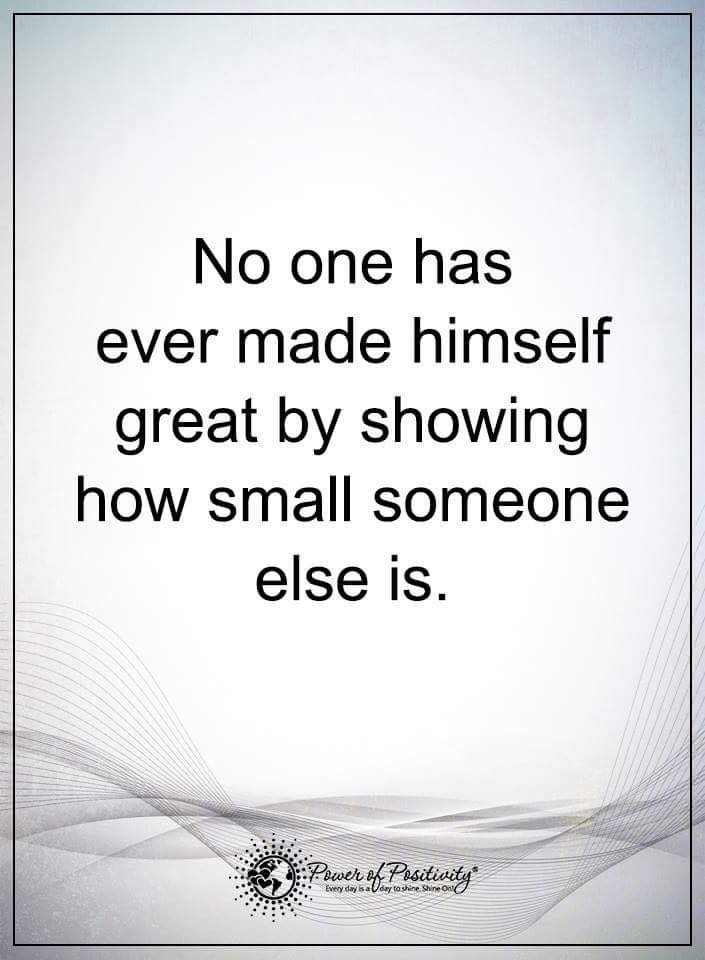 6. Does Not Accept Responsibility For Their Actions

Serial bullies refuse to accept the responsibility for their violence and instead will shift blame to someone or something else. They don’t see their bullying as their fault. That’s because they are reactive rather than proactive. They are reacting out of fear and anger at someone else’s misconduct. They see themselves as the victim or the hero. Most compelling villains see themselves as the hero of their own story. They aren’t responsible for their outrageous actions because they were just protecting something else like national sovereignty, religious orthodoxy or racial purity.

Regardless of the situation, you are responsible for your own actions. You choose to act or not to act by your own volition. You can choose to be gracious and understanding. Finally, you can choose to educate the other person in a rational and reasonable manner. If you threaten violence or use violence in order to get your way, then you need to accept responsibility for that action because you could have chosen differently.

Bullies often feel superior and use that feeling to dehumanize others as mere inferiors. Bullies can feel economically, socially, racially or physically superior. They use that feeling to justify their actions. When they feel that they are better than you, it gives them the justification they need to treat you like crap.

Once you realize that no one is intrinsically superior to anyone else, you can empathize with them. Everyone has something that they are good at, even though everything is not compensated equally well. You might be the most successful investment banker in the world, but without mechanics, computer techs, or carpenters, then you would have no way to get to work, nothing to work on when you got there and nowhere to live. Everyone has something special to offer the world.

Because bullies find it hard to accept responsibility for their actions, they often blame the victim instead. “He/She made me do it,” is a common excuse. You are either in control of your actions or you are not. No amount of hateful words or physical violence is ever justified against a peaceful person or group.

If you find yourself blaming another person or group for your violence or abusive words, then you might be a bully. Accept responsibility for your actions and your words. Using violence or intimidation to rob someone of their property, self-worth or rights is always wrong. You can choose a different path. It is your choice whether or not to victimize someone else. Learn to get what you want without violence and intimidation. Choose a better path.

Related Items behaviors of a bully bullies end bullying how to stop being a bully signs of a bully traits of a bully
Power of Positivity uses cookies to give you the most relevant experience. For more information see our Privacy Policy.
Continue
Manage consent