Understanding what is happening to your child may be a little tricky when they show behaviors you don’t fully comprehend. Unfortunately, if the problem is autism, an explanation of those behaviors may also be confusing. Learning more about the disorder (aka the autism spectrum) or understanding the symptoms of it may enable your child to get a diagnosis and professional help for the autistic child sooner.

Statistics reveal that the frequency of autism cases is on the rise. According to Autismspeaks.org, 1 in every 59 children will be born with the disorder. This is twice as many as were born in 2004. Boys are four times more likely to have it than girls, with a ratio of 1 in 37 boys and 1 in 151 girls. Autism occurs among all racial and socioeconomic groups.

Although genetics is believed to be the cause of autism, the National Alliance on Mental Illness (NAMI) is now studying possible environmental causes to determine its impact on the child in the womb. Several environmental factors may play a part in the development of the spectrum. The mother’s health is known to affect the health and development of the fetus.

Autism is not difficult to diagnose. Although there is no medical test for it, children as young as two can accurately get a correct diagnosis. A common factor is that a little more than half of the children with the disorder will have a low IQ, but about 44 percent of them will be average or even above average – which is greater than 85.

Getting a correct diagnosis will involve a team of specialists. Brain development is also noticeably different in terms of structures and connections, and it can be observed in infants as young as six months. Symptoms often arise before a child is two years old. However,  most doctors won’t issue a diagnosis until after a child is four years old.

The Range of Autism

Although there are some core symptoms in autism spectrum disorders, those symptoms may not be revealed in the same way in two children. Their abilities will vary, and so will their behavior.

10 Autistic Behaviors to Watch for

Children with autism cannot interact with other children or even with people in general. It is the key symptom of the autism spectrum. One of the first things that may be noticed is that they will not respond when their name is called, and they will avoid eye contact. They do not understand changes in the tone of another person’s voice or the meaning of facial cues. This is partly caused by the fact that they never look at other peoples’ faces to catch those facial cues, says the National Human Genome Research Institute.

Spoken language is an area in which a child with autism will likely be delayed. They have difficulty with communication when they do start talking and will often be awkward in their responses. In some cases, they may have a vast vocabulary, but may not answer a question with an expected answer – and it may not even be related at all to the topic. The National Institutes of Health say that an average child should be babbling by the time they reach their first year. They should also be speaking words before that time, but if they are not using any words by 16 months or two-word phrases by their second year, you need to seek an expert for diagnosis.

They may also repeat phrases, or speak in a monotone voice like a robot or have a sing-song voice. It is also possible that after they learn some new language and communication skills that these become lost later.

Because of their limited ability to carry on a conversation or have proper social interaction, they have very little ability to make friends among their peers. Their often odd behavior will tend to push other children away, and they are usually not bothered by it (until they are mocked or bullied). They are quite happy playing alone. They also have a hard time interacting with teachers in the classroom.

One study conducted by PLOS discovered that when autistic children are raised with animals that their social skills improve. The animals helped the children even to develop the ability to smile and laugh, have some facial expressions, as well as decreasing behaviors that are less acceptable. In the study, it was also observed that the children even expressed care for the animals, which included cuddling, hugging, comforting, and nuzzling. Having an animal in public was also found to create social interactions.

Children with autism may tend to overreact or underreact to various stimuli of their senses. While they may completely ignore some sounds, such as people speaking to them, other sounds may obviously disturb them. This can lead to them covering their ears or making various noises to attempt to drown out the sound. Their sense of touch may also be extra sensitive, causing them to pull away at the touch of a particular type of fabric or a pat on the back. This same effect may also occur when other types of sudden or unusual sensory input are received. This can include smells, lights, textures, tastes, and even colors. 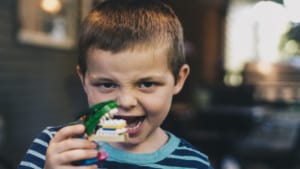 An autistic child will have abnormal body movements that will be readily noticeable. They repeat the motion over and over. These can involve the flapping of their hands, spinning around, and rocking. They will also tend to be continually moving.

6. Struggle to Understand or Express Emotions

Some children who are autistic may have a hard time understanding how another child or person feels. They also have difficulty being able to express their feelings. Research conducted by Scientific American says that this idea is wrong – they can show empathy. Where this idea comes from is that some children with autism (about 50 percent) have another disorder called alexithymia, and this disorder causes a lack of feelings.

Some children with this disorder fixate on a word or phrase and repeat it over and over again. This is called echolalia. This can be a word or phrase they heard from others, from adults, or even from a TV program. Their use of the word or phrase does not indicate that they know its meaning.

Autistic children are often very detail-oriented. They will take toys and other objects and carefully line them up. This may be more important to them than playing with the toy, and it will be to the point of being excessive.

9. Focused on Parts of Objects

They will also become focused on specific objects or parts of objects, such as a moving part on a toy. Their focus will be abnormal and intense, and it may cause them to preclude playing with other children. It may also extend to various topics.

10. Need a Routine to Survive

People that have autism need to have a regular daily routine. This provides them with a degree of security. If you break their regular routine, even in simple matters, they often become angry, distressed, and frustrated. It will often leave them unable to function when facing interruptions in a regularly scheduled routine. Their desired routine may even extend to meals when they want the same foods day after day.

Autistic children may also be self-injurious. The injuries may be rather minor, such as banging their head against a wall or may actually cause physical harm, such as cutting. In one study that used 149 people with autism aged 4 to 39, it was discovered that 50 percent of the people in the study had used some sort of self-injury within the past 30 days, which included, self-biting, self-hitting, and self-scratching.

Seizures may also be present with autism, even if it is not there at the start. Twenty-five percent of children with autism will develop seizures.

Girls May Have Different Symptoms

In an article by Scientific American, researchers have discovered that many girls with autism spectrum have likely been overlooked. This is because the original test models were all boys. Doctors now believe that girls have some different symptoms. Unfortunately, it still needs to be determined on how to diagnose a girl with them. Girls know how to mask some of their symptoms better.