Called Bridge to Work, the program has been such a success that the city’s mayor,  Frank Scott Jr., is planning to extend it an additional year, according to 12 News Now.

About the Bridge to Work Program

Associate pastor Paul Atkins of the Canvas Community Church, which runs the program, said they’re excited about the program and its growth. They have spent around $80,000 total on the program to make sure the homeless have a chance at a better life.

“We want to work with them on their next step,” Atkins said during a board meeting last month. “There are a lot of barriers that our people experience to go from homelessness and panhandling to full-time work. There’s a lot of steps in between.”

The Bridge to Work program was only scheduled to last six months. However, administrators extended it through the end of September 2020, according to the site.

The homeless also receive other help. Opportunities include physical and mental health treatment and other job interviews in addition to their paychecks. Some even receive temporary accommodations.

According to Atkins, 380 people joined the clean-up effort, with some joining multiple times. Participants cleaned a total of 130 sites, filled 2,056 bags with trash, and worked 1,821 hours so far.

The Plight of the Homeless

Unfortunately, homelessness is on the rise, despite unemployment rates declining. Many people debate about what can be done to end homelessness, but there are plenty of differing opinions. Some people believe that homelessness is a direct result of laziness, but others view it as merely a side effect of a much deeper problem. Of course, no one chooses to be homeless. Extenuating circumstances such as mental illness, lack of income, trauma, addiction, and other issues often plague the homeless.

Arkansas views the plight of the homeless in a compassionate way, offering them a solution to the problem instead of shunning them for it.

Some people, even with good jobs, cannot afford rent due to rising costs. So, they are forced out onto the street even though they’ve put in the effort to avoid homelessness. Also, because of near-stagnant wages and rising home costs, many people cannot even think about buying their own homes.

This problem extends beyond the United States; it’s now a global issue.

According to the U.S. Department of Housing and Urban Development’s Annual Homeless Assessment Report, in 2018, the United States reported over 553,000 of homeless people on any given night.

National reports have found that the homeless make up 2% of the overall population. That equates to around 150-160 million people. The reports also say that 20% of the world’s population lacks adequate housing, which equals approximately 1.6 billion people.

Adequate housing means access to necessary infrastructure, lighting and ventilation, plumbing, safety, and other basic needs that humans have.

So, if you have a house with clean drinking water, a solid foundation and walls, plumbing, lighting, and proper ventilation, you’re better off than 20% of the world’s population.

It’s easy to tell the homeless to go get a job, but with competition among candidates on the rise, landing a job can be difficult for someone without the right background. However, some companies want to give the homeless a chance. 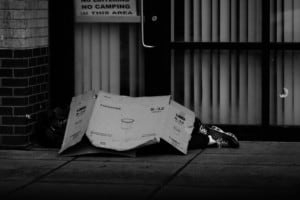