Researchers are finding connections between the popular OTC painkiller, acetaminophen, and ADHD in kids.

Doctors often recommend it to pregnant women for the following symptoms:

In the most recent years, some began questioning this practice.  Studies reveal this popular OTC painkiller taken during pregnancy connects it to ADHD in kids.

Acetaminophen, as it’s called in the United States and Japan, first came on the scene in 1878 by H.N Morse.  Despite several years of testing, it took until the 1950s for it to hit the market.  At that time, companies marketed it under the name of Triagesic. They sold as a children’s pain and fever reducer elixir. Currently, is it one of the most popular pain relievers under the brand name of Tylenol or Panadol. Still, the majority of sales are as a generic drug.

Interestingly enough, despite various attempts, scientists have yet to discover how it works.  This unknown detail is crucial as it has a reputation as being toxic to the liver and has resulted in hundreds of deaths each year from liver failure.

FDA on Acetaminophen and Pregnancy

Approximately 50-70% of pregnant women worldwide take Acetaminophen to aid them in the pain and discomfort of pregnancy.  In 2015, the FDA released a statement regarding multiple pain killers available and their alleged risk factors.  The medications reviewed included OTC and prescription Acetaminophen, prescription NSAIDs, and opioids.  Studies alleged that each drug could potentially harm the baby or mother when taken during pregnancy.  In the case of Acetaminophen, it also found a link to children developing ADHD  after mothers took the drug during pregnancy.

The FDA’s statement after evaluating the reports for all of the medications concluded the studies provided demonstrated either inaccuracies or inconsistencies. Therefore, the FDA could not issue a recall or re-evaluation of any of the medicines.

The FDA stated that it was essential that pregnant women have access to pain killers prescribed by their health professionals.  It was also necessary that doctors duly informed women of potential complications with each medication. Furthermore, they advised that pregnant women take the lowest dose possible for the shortest duration.

JAMA Pediatrics published a study in October of 2016. Evie Stergiakouli, Ph.D. of Medical Research Council,  Integrative Epidemiology Unit at the University of Bristol in the United Kingdom, wrote it.

Dr. Stergiakouli and associates analyzed information gathered from 1991-1992 obtained from the Avon Longitudinal Study of Parents and Children.  They based findings on a questionnaire given to 7796 pregnant women enrolled in ALSPC, along with their partners and children.

Women completed the questionnaire at 18 weeks, 32 weeks, and when the child was 61 months old.  When the children were seven years old, the mothers answered another survey to assess behavioral problems.

The outcome of the questionnaire demonstrated:

Previously, in 2014,  JAMA Pediatrics published a similar report.   This report analyzed the 64,322 children and mothers who registered in the Danish National Birth Cohort from 1996 – 2002.   The data regarding acetaminophen use had been obtained via three separate telephone interviews throughout the pregnancy and six months after birth.  This report was looking for data related to ADHD and hyperkinetic disorders.

To ascertain the health of the children, the researchers used behavioral questionnaires given to the mothers, obtained psychiatric records from the Danish National Hospital regarding any hyperkinetic disorders and prescriptions of ADHD medication prescribed from the Danish Prescription Registry.  All records were before 2011.

The results of these reports were based on over 50% of the mothers who reported acetaminophen use during pregnancy:

What are the possible connections between Acetaminophen and ADHD

There are a variety of reports similar to these from different countries and universities.  From these reports and some mice lab studies, researchers have theorized various reasons behind the possible connection between Acetaminophen and ADHD diagnosis:

In October of 2019, a study was published in JAMA, by a group of doctors, nurses and other associates from the University of John Hopkins University, Bloomberg School of Public Health in Boston, Massachusetts, The Boston University of Medicine and others.

This group of researchers chose to examine potential associations between umbilical cord plasma with markers for acetaminophen use and ADHD, Autism spectrum disorders, and other developmental disorders.

They analyzed 996 mothers and infants who had volunteered in the study at birth and were part of the Boston Birth Cohort.   They were followed up by the Boston Medical Center from October 1, 1998, to June 30, 2018.

Samples from the cord were taken, measured, and recorded for three different types of acetaminophen metabolites, or broken down chemicals of Acetaminophen that was metabolized.

Researchers then compared these findings to the children’s records of doctor-diagnosed ADHD, Autism Spectrum disorder, or any other developmental disorder.

The cord studies indicated that the women taking Acetaminophen during the 2nd and 3rd trimester had an increased risk of the child receiving a diagnosis of ADHD or Autism spectrum.  The study also stated that the risk factor also increased as the dose increased. 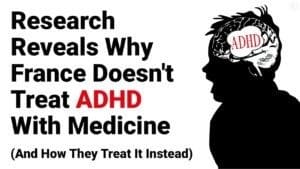 Final Thoughts on the Connection Between OTC Painkillers and ADHD

Taking medications at any time always carries with it some risk, especially when you are pregnant.  Yet, physicians till consider Acetominophen the safest pain reliever and fever reducer for pregnant women and children. These recent studies revealing this popular OTC painkiller, when taken during pregnancy, may cause ADHD in kids is alarming.