By Power of PositivityPublished on September 03, 2019Last modified September 06, 2019

Many people have heard of the disease Autism Spectrum Disrder (ASD). However, most people don’t completely understand it. This makes it especially difficult to identify the disorder in the people around you. This guide attempts to explain the disease and the signs of Autism. That way if someone in our life does have the disorder, you can learn more and get them the help they may need.

What is Autism Spectrum Disorder (ASD)?

Autism is a developmental disorder. That means that the person with the disorder may not grow at the same speed or to the same level. This can affect the person both physically, socially, and mentally.

An autistic person falls somewhere on the spectrum of severity of the condition, ranging from mild to severe. People with a mild condition might look, talk, and act like anyone else in their class. However, people who fall on the severe end of the spectrum will have noticeable developmental problems. They may not be able to live a completely independent life.

ASD is not the same as being mentally disabled. Instead, look at it as more of a developmental disability with a high emphasis on communication and social issues. Luckily, unlike most people who are mentally disabled, the effects can be helped to a certain point.

Many children show signs of ASD as early as a year old. A child should be able to respond to their name by 12 months. Children with ASD may simply stare off into space, ignoring their name at this point. A child should also be able to point at the things that capture their attention by 14 months. If your baby can’t do these simple tasks, you should take them to get tested for ASD or other developmental disorders. It may take time for you to get a definite diagnosis since the child is so young. However, when you catch these things early, there are steps you can take to help relate to your baby and help them learn as they get older. 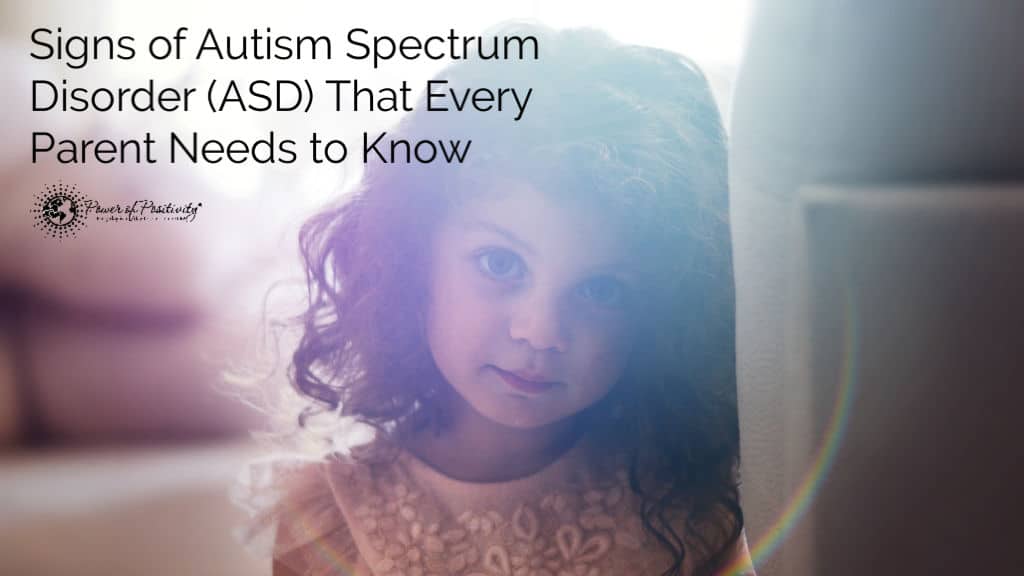 You may not see any signs in your baby. It might take you much longer to discover a potential problem. Here are some of the common signs of ASD in children and adults. When you see multiple symptoms in one person, that’s a sign they may be on the spectrum.

Children are generally quite energetic. However, most of them slow down at some point. Children with ASD may never stop from the moment they wake up in the morning until the moment they go to bed. You’d know if this is true, especially if you’re the parent. If this lasts for over six months, it might be time to bring the child into a doctor. This hyperactivity may be a result of the disorder. It may also be a sign of other disorders. Either way, it’s something that should be addressed.

Some of the most common communication problems are reverse pronouns, delayed communication skills, not understanding jokes or sarcasm, and speaking in a flat, monotone voice.
Many children with autism have a hard time finding their words. You can tell they are struggling from possible stutters, confusion, and how frustrated they get.

They may struggle and never seem to find the words they wanted to say. Unfortunately, this may cause a child to act out. Be prepared to handle this by supporting them in their struggle to express them and being understanding.

Another communication sign is if your child repeats the same things over and over again. It shows they aren’t able to say anything else to express what they are feeling. Help them expand their vocabulary by giving them other ways to say what they want. If the phrase they are repeating isn’t appropriate for the conversation, try to keep them on track as much as possible.

Eye contact demonstrates confidence and a true connection with the person you are communicating with. Since people with autism may experience trouble with intimacy and communication, they may often avoid eye contact. Look to see if it happens with everyone or just certain people. You should also pay attention to see if it happens over a specific topic or at a certain time. These observations can give you clues as to why they aren’t opening their eyes. Whatever the reason, encourage the child to look people in the eye. Look them in the eye back with a smile.

Many people struggle with their feelings well into adulthood. However, for people with ASD, they are unable to help themselves. They may not even be able to recognize the emotion they are feeling. They may simply feel an overwhelming sensation of some kind. Additionally, they struggle with handling that emotion. When talking to other people, they might not be able to recognize the emotions of others. This can make developing personal relationships more difficult.

Signs of autism also include obsessive thoughts or interests. It’s one thing to be interested in trains or make a point to remember to lock the door. It’s another thing to become completely obsessed with a particular thought or interest. This may be a sign of dependence. While you want to encourage your child’d interests, you want to make sure they try multiple things to keep them well-rounded. You also want them to try multiple things in case they learn they have a love for something else.

We all must experience change in life. For children with autism, this change can cause a huge shock to the system. When a person with ASD gets used to a routine and a certain environment, it can be hard for them to get used to something new. They may not be able to adjust at the speed of others. The initial shock may also force them to act out. It’s important to be stern yet kind when punishing a child for their inappropriate behavior. You want to ensure they know what they did to get punished and the expected corrected behavior.

Some children may feel extreme amounts of emotion as a result of their condition. In some cases, they might inflict harm upon themselves to help make sense of all of the feelings burrowing up inside of them. Be understanding and get them help to prevent them from an adulthood of wearing long sleeves to cover up their scars.

Consider focusing on different ways to express themselves when they get overwhelmed. If you can find something productive for them to do that they actually do, it can help keep them safe while encouraging a passion.

Since communication is a big problem for children who suffer from ASD, they don’t always say or do the right thing in certain circumstances. For example, they may not respond to questions with a relevant response. They may respond with something completely obscure like they weren’t listening. Also, they may not understand how to comfort people in bad situations. Or, they may do something like laugh in sad situations or cry in happy situations. While this may come off as rude, they simply don’t know how to respond. Try to be patient.

If you think your child or a child you know might have autism, it’s time to watch them a little more closely for the above-mentioned symptoms. Having one of the symptoms might not necessarily mean a problem. However, the more symptoms you see, the more likely the child may be on the spectrum.