ADHD isn’t just something that affects children. While it starts in childhood, ADHD is a developmental disorder that follows children into adulthood. What is ADHD, exactly and what are the signs? ADHD stands for “Attention Deficit/Hyperactivity Disorder.”  ADHD comes in three different types: inattentive, hyperactive, and impulsive. While it’s possible to have one, the other, or all three, all forms are underneath the ADHD umbrella.

It’s important to know the early signs of ADHD so that both children and adults can get help and treatment for it as soon as possible. While most adults learn to function with their ADHD without ever being diagnosed, it’s always best to know so that ADHD can be managed.

Here Are 10 Early Warning Symptoms of ADHD to Never Ignore

“Living with ADHD is like being locked in a room with 100 Televisions and 100 Radios all playing. None of them have power buttons so you can turn them off and the door is locked from the outside.” – Sarah Young

According to the National Institute for Mental Health (NIMH), having trouble focusing is one of the biggest indicators that someone has ADHD. In children, this often manifests as trouble focusing on school work or other activities that the child doesn’t consider to be fun. In adults, most people with ADHD tend to have trouble focusing on their workload. If you notice that your child has issues keeping their attention on one thing at a time, it might be best to see about ADHD testing. The same goes for yourself.

2. Doing poorly in some subjects but excelling in others

For children who are still in school, one of the biggest warning signs of ADHD is inconsistencies with their school work. Most children who have ADHD excel in things like art, history, and English. They also tend to need extra help in subjects like math and science. Most people think that children just need to apply themselves, but there may be another reason for poor grades and low scores in tests.

Spacing out or daydreaming is one of the classic signs of ADHD in both children and adults. If your child is having trouble staying focused and seems to always be off in their own head, then it’s possible they might have ADHD. Again, the same option should be considered for adults who have ADHD. If you find yourself constantly daydreaming and using escapist fantasies to make it through the day, you might want to talk to someone about the possibility of ADHD.

While this is only applicable to people with either combined-type ADHD or hyperactive ADHD, this is still a major warning sign. In children, this often includes being unable to sit still, jiggling legs, acting disruptive in class, or constantly having to be told to sit down and pay attention. In adults, this can include constantly jumping from task to task, or a consistent need to always be multitasking.

Auditory processing issues happen in both children and adults with ADHD. It’s similar to being hard of hearing, but there are no physical problems with the ears. What this means is that a child may have trouble hearing or understanding what someone is saying if they are in a crowded or loud environment. However, they will be able to hear perfectly fine in a quiet space. According to the NIMH, this may look like a child ignoring an adult when being spoken to directly, but this is not really the case.

Rejection-sensitive dysphoria is a term used for people who experience extreme distress when giving criticism. This is especially common in people who have ADHD. If you notice that your child becomes upset beyond the reasonable amount when criticized or corrected, this very well might be the reason.

Along with sensitivity to criticism, one of the early warning signs of ADHD is extreme emotions. They may have trouble regulating their emotions, which can cause an outburst of anger or sadness. Compounded with hyperactivity, an ADHD child may throw tantrums at a much higher rate than a child without ADHD. 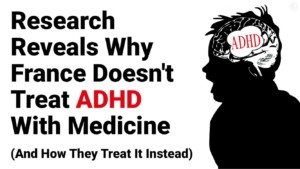 On the opposite end of being unable to focus, people with ADHD have a tendency to hyperfocus on things that they find enjoyable. A child with ADHD may watch the same cartoon over and over or listen to the exact same song for hours on end. Adults with ADHD will do the same thing, and many don’t even realize that it’s a symptom of ADHD.

Both children and adults with ADHD will display this sign. Children with ADHD will often have a difficult time staying organized. Their rooms may become messier than normal, and they don’t have a system of organization. Adults with ADHD will have messy desks, rooms, and houses. There’s very little ability to organize in people with ADHD.

Being the parent of a child with ADHD can feel daunting, especially before you know the warning signs. Likewise, growing up without knowing why your brain behaves the way it does can make everyday tasks seem monumental. The truth is, ADHD is entirely manageable – both with and without medication! All it takes is knowing the right tools to work around a brain that works just a little differently than others.