Nearly every religion tells us that our beliefs determine our behaviors. Even ancient people relied on guidebooks to know that one’s life is a reflection of how they think. Nowadays, most of us would concur with the passage above. In fact, nearly every religion has a similar passage, demonstrating the uniformity around this belief.

“Be careful how you think; your life is shaped by your thoughts.” – Proverbs 4:23

How our thought process is developed is a truly complex topic. It can be simply stated that the process develops in accordance with a number of internal and external factors. As such, we develop various behaviors both positive and negative. People that go through difficult situations in life have their thought processes impacted. In turn, this impacts a person’s behavior.

It is important to differentiate the behavior from the person.

We believe that a person is greater than the sum of his or her parts. We also believe that pain is often expressed in the form of negative behavior. Further, it is important to understand that ignoring the entire person is not the answer. Instead, develop your inner strength by ignoring the behavior while doing something positive for the person – prayer, a smile, positive energy, etc.

Here are 7 negative behaviors of people that you should ignore, and how you can help them… 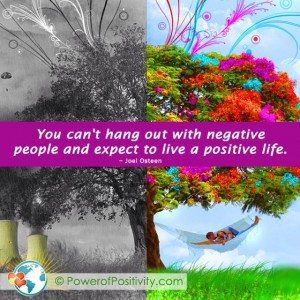 Regardless of the source or severity, dramatic behavior is overwhelmingly negative. Instead of buying into this behavior when it’s directed towards you, conduct yourself with confidence and composure. The stronger the behavior, the more relaxed and positive you should be in response.

Be an example by communicating and expressing yourself peacefully. Don’t allow drama to negatively impact the person you know that you are.

Denying or opposing your ambition through naysaying behavior should be considered unacceptable. Never allow the negative and unsubstantiated claims of others to limit how you think about and approach your ambitions, goals, and dreams.

This behavior manifests itself in other people’s opinions, presumptions, and other shunning words and actions about something you’re trying to accomplish. Simply put, never buy into this behavior.

Maybe you’ve been in this type of situation. It is important to look beyond this behavior and act confidently and positively in spite of it. Not only will you notice that your confidence is strengthened, but the guilty party will likely change their behavior as well.

Some people are always on the lookout for others that they can use to advance their agenda, whatever that may be, through whatever means possible. This is manipulative behavior in a nutshell.

People that attempt to manipulate often do so by playing on other people’s emotions. They generally don’t trust the logical capabilities of others and seek to “pull the wool over” their eyes. Truly a sad state, but this type of behavior exists.

There is no easy way to detect this behavior, but one way is to look at the person’s track record. Have you caught them in a lie? Do they have a generally negative attitude? Have they spread rumors or gossiped about someone? Do they display predominantly individualistic types of behaviors?

Generally, people that display manipulative behavior display these and other “red flags” that can potentially unveil their capability to manipulate. These individuals also have an egotistical streak, thinking that they are smarter and craftier than anyone else.

Be aware of manipulative behavior by remaining vigilant in your dealings with others. Remain positive and confident while sending positivity and encouragement to these types of individuals. This could be the difference in changing their perspective along with their behavior.

The truth is that we all display stubborn behavior at times. However, there are people that display this behavior at a magnitude that far exceeds the norm.

As with most other behavioral traits, stubbornness onsets through early negative experiences. Stubbornness may stem from a parent’s disposition, violations of trust, and other instabilities displayed throughout childhood.

Forget about the unfortunate circumstances that trigger the behavior. Stubbornness is difficult to deal with and comes in many forms. You may have a co-worker that refuses to listen, a parent that constantly judges, or others who refuse to give you the benefit of the doubt.

The solution is to simply be you around these individuals while directing positivity (in any form) towards them. Above all, don’t respond with any kind of stubborn behavior of your own. Instead, show that you are a trustworthy, compassionate, understanding individual who appreciates the positive things about them.

Impatience can be defined as (1) irritable behavior that results from delays or (2) a restless need for change and excitement. The display of impatient behavior is often tied into someone’s goals; specifically, anything that hinders or aggravates the person in active pursuit of these goals. These goals could range from getting ahead of you at the drive-thru to getting that promotion at work.

As with stubbornness, we all have the tendency to be impatient at times. However, there are some individuals that take impatience to the extreme. These individuals detest being held up at anytime, anywhere, for almost any reason.