<strong>A strong woman works hard to create the life they want to live. Living authentically is the key characteristic they share. It’s this trait that makes them who they are. Furthermore, they aren’t willing to jeopardize what they have worked for.

As such, they often come off as independent women that don’t need a man to be happy. And this might be true on some level. However, most do want a relationship that compliments what they stand for and what they have accomplished so far.

Don’t let the tough exterior fool you. An empowered woman is capable of loving deeply and fully and wants a meaningful relationship in her life. She is not, however, willing to compromise her ideals, her goals, or her life-long ambitions for it. She believes her wants and her relationship can coexist with the right man.

Here are 21 things to expect when you date a strong woman. 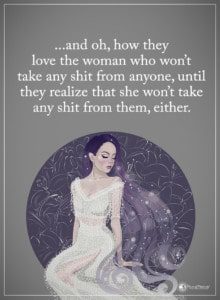 Of course, an independent woman is much more than the things listed here. Thus, the important takeaway is to expect a relationship, not a dalliance. Today’s enlightened women rarely engage in a relationship that doesn’t serve her. So expect her to fully commit until you prove yourself.

Empowered ladies are tough yet vulnerable. Indeed, they love openly. But they will hold their feelings close and trust wholly only if you earn it. You have to be willing to peel back the layers to get to her heart. If you can get through the outer layers of a strong woman, you will be rewarded with a loving, honest and fulfilling relationship.