Here’s a little story about abundance.

I was happy to join a gathering of like-minded friends a few years ago as I’d been working long hours and needed a fun break in my schedule. First, we all got together with a large group supporting a local wind energy project. Then eight of us headed off to a local restaurant that made fresh guacamole right there at your table. Since most of us were vegetarians or vegans, this was the perfect late night snack.

When we arrived at the restaurant, we sat at the only available table, a six-top. But we determined we could fit eight and practically sat in each other’s laps to squeeze in. Luckily most of us had known each other a long time and didn’t mind the close proximity.

As it turned out, I found myself sitting very close to Mike (his name has been changed for this story). Mike was a very vocal, intelligent man who usually shared his tales of woe with all who would listen; this evening appeared to be no different. Although the atmosphere at the table w 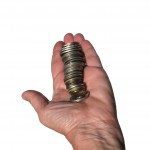 as light-hearted, Mike talked about his current unhappiness with his career, lack of money and abundance, the unfortunate condition of his car, his non-existent love life and his need to find new living arrangements because he had just been kicked out of his apartment.

We’d all heard similar versions of the same stories from Mike and expressed our care but did not dwell on these topics with him.

After an hour or so, we all needed to leave as it was a weeknight and most of us had to be at work the next morning. One of my friends announced that she wanted to pay the entire bill when the waiter brought it to the table. Although we told her we wanted to chip in, she absolutely insisted and wouldn’t take anyone’s money. With that, Mike sighed deeply in relief. He mumbled that he only had a few dollars in his pocket and really needed it to put gas in his car.

As we left, Mike offered to walk me to my car. I guess he felt I had a compassionate ear and wanted to continue telling me his sad story. He said he was convinced that if he just had more money all of his problems would vanish. He really disliked working but knew that money was his answer. There was no one else close by as we walked down the sidewalk when I noticed some folded up paper on the ground. I picked it up as Mike talked on and on. He didn’t notice the paper nor did he notice me picking it up.

It turned out that the paper was two twenty-dollar bills folded together.

I looked around to see who could have dropped the money so I could return it. But there was no one for about a hundred feet in front of us, and only our friends behind us. Since I realized I couldn’t return the 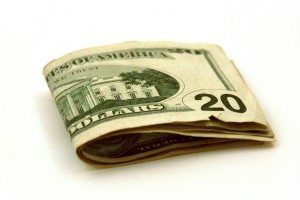 money to its rightful owner, I did the next best thing.

That’s right… I ran back to the friend who had so generously paid the bill and gave her the money. I explained that I found it on the sidewalk and since the owner wasn’t around I felt she should have it. She gratefully accepted the cash. Her giving spirit had inspired me to give her something in return.

The whole event struck me very poignantly. Mike was so engrossed in his story of “no money” that he was oblivious to the cash waiting right at his feet. Could I have given him the $40? Yes, I guess I could have. But I knew it wouldn’t have made a difference. His concerns weren’t really about money at all, and giving him the $40 wouldn’t have changed his life, or his story. Giving the money to the person who had shown great generosity felt right to me. I knew she didn’t have a high-paying job and the bill would have been a bit of a struggle for her. So, giving her the found abundance was the least I could do.

Now don’t get me wrong; I am not criticizing Mike.

There were times in my life when I was very much like him. I was blind to the abundance around me and told a similar story of lack. People pointed out what was right in front of me but I wasn’t ready to see it. I was too attached to the idea of not having enough.

So where is everyone today?

The wind energy project still has not come to fruition. That restaurant still makes the best guacamole on Long Island. I haven’t seen Mike in years, but everyone who spends time with him says that he’s still sharing the same sad stories. And my girlfriend who paid the bill still insists on paying every time we go out for a meal, and we playfully argue to who will really take care of the bill. Life is funny like that, isn’t it?

Wishing you a day filled with found abundance and wonderful friends.

Katrina resigned from her corporate position as an executive at a $41 billion bank to pursue a full-time career as an author, motivational speaker and wellness advocate. She now dedicates herself to helping people live happier, healthier, and more abundant lives. She is the author of Wholarian Vision and The Mustard Seed Way, as well as an ordained interfaith minister.

Related Items find abundance how to apply law of attraction to your life how to improve your life law of attraction manifest abundance tapping into abundance
Power of Positivity uses cookies to give you the most relevant experience. For more information see our Privacy Policy.
Continue
Manage consent