Golly…we are a success-driven society, aren’t we? Society seems to judge how successful one is by a number of superficial factors: your income, car, home, profession, etc. One of the last things any of us wants to be considered is a failure, right? Just the word failure creates a negative undercurrent of emotion within us. Being labeled as “failing” is one of the harshest critiques of one’s personal worth…according to modern society, anyways.

Try and see if you recognize any of these names: Abraham Lincoln, Thomas Edison, Winston Churchill, Steven Spielberg, and Albert Einstein; how about Henry Ford? Nobody would argue that these are some of the best, brightest minds to have ever existed and that they’ve all made tremendous contributions to society. Nobody would ever attach the word failure to any one of them. But that’s exactly what they were at one time.

Failure is a matter of perspective, plain and simple. Let’s just take Abraham Lincoln, for example.

The 16th President of the United States may just go down in history as the best leader the United States, perhaps the entire world, has ever had. What the history books will often omit, however, is the number of failures that Lincoln experienced, among them: losing his jobs, failing in business, losing multiple runs for office (eight in total), and numerous rejections by colleagues and constituents; this all before being elected president in 1860. The rest is history.

Lincoln’s story alone is enough to demonstrate how failing can be a driving force towards success. The fact is that many of life’s important lessons are learned through these types of setbacks.

“My great concern is not whether you have failed, but whether you are content with your failure.”    Abraham Lincoln, 16th President of the United States

Here are 10 lessons we can all learn from failure:

There is a lesson to be learned from everything, including failing. Perhaps the greatest benefit earned from failure is strength. Think about it: if life were perfect and every endeavor ended in seamless success, what sort of person would you be? The truth is this – failure teaches us more about ourselves and builds character better than success ever could.

Think about this: how many times in your life have you failed at something only to discover another opportunity? Maybe it was a failed relationship that led you to someone great. Maybe it was a job that didn’t suit you and brought you a better one. Regardless of what your circumstance was, the sweetness afterward was much better as a result.

3. Failure is a great teacher

Failure has a way of showing what your strengths and weaknesses are while motivating you to correct them. In any area of life – academics, work, play, relationships, etc. – failure is often the driving force behind success. For example, Michael Jordan, arguably the greatest basketball player in history, failed to make his high school basketball team. When asked about his early failures, Jordan said:

As should be clear by now, most people are scared of failure. Many of us are unwilling to take the uncertain path; we’d just prefer to stay in the same boat and not rock it too much. After all, we have responsibilities and people that depend on us. In short, failure requires courage. Whether the failure experienced was anticipated or not, you’ll need to toughen up a bit to get through it.

When experiencing failure, it’s very easy to just roll over and give up. “What’s the use?” you say to yourself. It takes guts and determination to keep driving forward. Take J.K Rowling, author of the enormously successful Harry Potter series. Rowling said that she received “loads” of rejection letters over a five year span before finding a publisher for one of the most successful book (and movie) series ever. Wow.

If necessity is the mother of invention, failure is the father. Nothing spurs creativity like failure. Artists and creators of all stripes know that if something doesn’t work out, they must tap into their large reservoir of creative talent to create something truly unique.

Winston Churchill once said “Success is your ability to go from failure to failure without losing your enthusiasm.” The most successful people are simply the ones who didn’t give up. Finding the motivation to believe in yourself and press on is paramount.

While a simple concept, accepting failure can be difficult to truly embrace. In the midst of experiencing failure, it is never a good feeling. In fact, this feeling can be downright gut-wrenching. But just remember that failure is acceptable…lack of effort is not. Here’s Michael Jordan again: “I can accept failure, everyone fails at something. But I can’t accept not trying.” 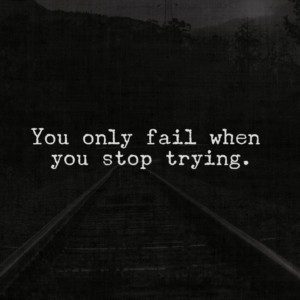 Steve Jobs knew that the corporate world was not for him. In fact, many things were not. He disliked college, societal norms, and the stiffness of businesspeople. Before founding Apple with Steve Wozniak, Jobs could have been labeled as a failure…he didn’t care. Jobs said: “Remembering that you are going to die is the best way I know to avoid the trap of thinking you have something to lose. You are already naked. There is no reason not to follow your heart.”

So explore and don’t let anything, especially fear of failing, stop you.

Along with making us better people, failing both teaches and strengthens resilience. Through the discomfort and uncertainty of an epic fail, one will be better able to take on any of life’s challenges as they come. Resilience is something required of all successful people, and there is no better teacher of resilience than failure.

What lessons has failure taught you in life?  Add to the conversation below: