It happened. You failed. You poured your energy into something, and it didn’t work out. The good news is that your failure does not have to be in vain. There are lessons that you can take from this experience, and there are positive attitudes that you can turn into positive outcomes. Here are just a few inspirational quotes about overcoming failure and making your dreams come true despite everything!

Inspirational Quotes When You Hope to Overcome the Sting of Failure

1. “The only real mistake is the one from which we learn nothing.”

Mistakes are an inevitable part of life. You can’t control them. However, you can learn from them, and you can make sure that you never make the same mistake twice. With this mindset, you can turn failures into valuable learning opportunities that will serve as a foundation for your future goals.

Vitas Gerulaitis is a tennis player who repeatedly lost to a rival named Jimmy Connors. He suffered 16 defeats in a row! Instead of being angry, however, he maintained a positive attitude that eventually made headlines. When he finally triumphed over the other player, he declared, “Nobody beats Vitas Gerulaitis 17 times in a row.” It went down in history as one of the funniest inspirational quotes ever heard in the tennis world.

3. “Everything you want is on the other side of fear.”

Failing can leave lasting scars. It’s understandable, but it’s also something that you need to work through and overcome. You’re never going to achieve success unless you’re willing to risk failure, so get back on the horse and try again. Start another business. Make another proposal. Date someone new. Tomorrow’s happiness is dependent on today’s courage.

Is your fear of failing actually a fear of succeeding? Some people can sabotage themselves without even realizing it. The thought of success makes them nervous, but they wrap it up in fears of rejection and defeat until they’ve talked themselves out of even trying. Don’t be this kind of person! Keep your energy nice and positive, and this karma will return to you. You get from the world what you put into it.

5. “I’ve missed more than 9,000 shots in my career. I’ve lost almost 300 games. Twenty-six times I’ve been trusted to take the game-winning shot and missed. I’ve failed over and over and over again in my life. And that is why I succeed.”

No one would suggest that Michael Jordan is a bad basketball player just because he’s messed up a few games. If you can build a successful empire, no one will care about your early mistakes either. They’ll just be footnotes in your story. They won’t define you, and they won’t stop you from achieving your ultimate goals and dreams.

6. “It’s failure that gives you the proper perspective on success.”

7. “If you set your goals ridiculously high and it’s a failure, you will fail above everyone else’s success.”

“Shoot for the moon, and even if you miss, you’ll land among the stars.” This is a classic piece of advice that’s been shared by many people in many industries, and it endures because it’s true.

While there’s something to be said about making small, actionable goals, there’s nothing wrong with dreaming big about your overall future. Aim high. Go nuts. Who’s going to know your innermost thoughts but you?

8. “An inventor fails 999 times, and if he succeeds once, he’s in. He treats his failures simply as practice shots.”

This logic isn’t limited to inventors. It can apply to work, school, relationships, business opportunities and more. You might date a dozen people before you find your soulmate and live happily ever after; you might experiment with a bunch of diets until one finally sticks and the weight comes off. The detours won’t matter once you find the right path and follow it to your destination.

You can’t be certain of success. You can be certain of failing, however, if you don’t even try. And you can’t win a competition without entering it; you can’t get a job without applying for it. Gather your courage, look at some inspirational quotes to bolster your confidence and start overcoming all of the obstacles in your way!

10. “The master has failed more times than the beginner has tried.”

Think about someone you admire. How many times have they failed? It’s probably a lot. The artist has wasted a lot of canvasses; the karate instructor has missed a lot of punches. Instead of giving up, they adjusted their techniques and kept going, and that’s exactly what you should do as well.

Failures don’t have to be permanent. In fact, if you’re living a life of excitement and innovation where you’re constantly taking risks, trying new things and expanding your horizons, you probably fail quite a bit! These setbacks don’t have to be dark landfills where you languish forever. They can be temporary stepping stones on your road to success.

12. “Anyone who has never made a mistake has never tried anything new.”

Some people spend their entire lives inside of their comfort zones. They never fail, but they never learn, grow, achieve or earn things. They never have the kind of story that inspires others. Is this how you want to live, or do you think that you have more to offer the world?

13. “Pain is temporary. It may last a minute, or an hour, or a day, or a year, but eventually it will subside and something else will take its place. If I quit, however, it lasts forever.”

As an athlete, Lance Armstrong was talking about physical pain, but his words can also apply to psychological resilience. If you’ve failed at something in your life and are wondering whether it’s worth the effort to try again, the answer is yes. These negative feelings that you’re experiencing can be replaced by new ones. No emotion has to be permanent.

14. “I’d rather be partly great than entirely useless.”

One of our favorite inspirational quotes comes from Voltaire: “Perfect is the enemy of good.” If you’re obsessed with the idea of doing something perfectly, you might psych yourself out and never do it at all. This is especially true if you’ve already failed and are worrying about failing again. You’ll need to push through that mindset if you want to achieve your goals.

15. “Failure is so important. We speak about success all the time. It is the ability to resist [it] or use [it] that often leads to greater success. I’ve met people who don’t want to try for fear of failing.”

J.K. Rowling knows a little something about failing. Harry Potter and the Sorcerer’s Stone was rejected by multiple publishers when she was still a single mom living on welfare. Did she give up? Did she throw away her manuscripts because some people behind a desk didn’t think that she was good enough? Imagine how different her life would be if she’d thrown in the towel. 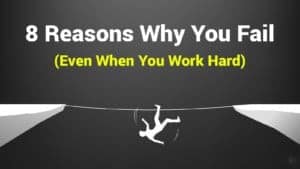 This is another one of our inspirational quotes that deals with perspective. It’s a “glass half empty” kind of mindset. Are you going to complain about the fall, or are you going to use the bounce to reach new heights and grasp new things? Can you turn a negative into a positive? There’s actually a science to it, so you won’t be alone in your efforts.

17. “I don’t believe in failure. It is not failing if you enjoyed the process.”