What does it mean to underestimate yourself?

Underestimate:  “to estimate something to be smaller or less important than it actually is.” Synonyms: lowball, underappreciate, underrate, undervalue ~ Oxford University Press (source)

Besides underestimating ourselves, we can underestimate others. Relationships in which one person is known to minimize the other include bosses and subordinates, teachers and students, and, perhaps most sadly, parents and children.

People may undervalue any number of attributes, including their abilities, capabilities, compassion, inner-strength, intelligence, and self-worth (i.e. what they “bring to the table.”) Underestimation of oneself can result in a lifetime of diminished confidence and stress – sometimes even developing into mental health disorders, including anxiety and depression. (1)

What causes someone to underestimate themselves?

“You underestimate yourself because you lack faith in yourself. Each human has the potential to do something great and magical in their life, but it is only possible when one believes in themselves.” – ‘Jill C.’ on Quora

As to why a person underestimates themselves, reasons vary. Psychologists commonly trace the origin of low adult self-esteem to:

The simple fact is that life often does not go the way we want or expect. Worse, we struggle to “find” the “answer” to life’s problems. Indeed, it is entirely possible to perpetually wade in the confusing undertow of existence – suffering much in the process.

What are the effects of underestimating yourself?

A sense of worthlessness often accompanies the tendency to underestimate oneself. When people lose any sense of self-worth, they are at their most vulnerable. When a person reaches such depths, they often grow desperate to escape the negative and ruminating thoughts that seem to take over the mind.

For example, numerous studies link a low sense of self-worth with alcoholism. In a 283-person study published in the journal Addict Health, researchers found that low self-esteem correlates with poor choices and acts of self-harm, including addiction, prostitution, and theft. (2)

Low self-worth brought about by underestimating oneself may make a person more prone to suicide. It is believed that the adverse emotions brought on by low self-esteem – including depressive symptoms and hopelessness – are primarily responsible for the increased risk of suicide.

Are you underestimating yourself?

First, let us distinguish between humility and modesty and underestimation. The former is a set of personality traits; these traits are generally labeled as positive. The latter is potentially damaging psychologically – and not to be welcomed.

Second, it is essential to fully acknowledge and understand that having pride in your abilities and hard work is not a bad thing. In fact, these attributes help to build confidence and strength in oneself. We all know that price – taken to excess – is not a positive. Fortunately, very few of us have this problem!

Lastly, it entirely possible to subtly underestimate yourself. We discuss some of the ways in which we do so shortly. You may also underestimate the importance of specific activities and frames of mind – all of which allow you to be the best version of yourself. These too are mentioned.

So, what are possible signs that you’re underestimating yourself? Here are ten:

10 Signs You are Underestimating Yourself

1. You always compare yourself to others

Let’s get one thing straight: competitiveness is not necessary for growth. An unhealthy attitude of hyper-competitiveness has, for some inexplicable reason, taken hold in most of modern society.

Now, competition can be a good thing for some people – and in the right circumstances. Scholastic, sports, and fitness competitions, for example, can motivate some to fulfill their potential – and make themselves a better, happier, and more satisfied person in the process.

But constantly gauging how you “measure up” against everyone else is extremely unhealthy. There is only one individual with whom to compare yourself – and that’s, you guessed it, yourself!

People-pleasing is one of the most ubiquitous signs of underestimating yourself. You people-please because you want people to “like you,” thinking that by doing what they want, they will accept you. In other words, you don’t believe you are good enough on your own merits.

Not only does people-pleasing not work (see: high school), it can lead you down the path of indentured servitude. Be the best version of yourself – and you will never have to worry about pleasing others ever again.

3. You have toxic relationships

People who have tendencies toward people-pleasing often also remain in toxic relationships. Why do people do stay in the company of bad characters? Because that’s who they think they deserve. Maybe you have a similar story in your family: the super-smart kid who, out of a desperate need for acceptance, gets in with the wrong crowd, grows up and does the same thing in adulthood.

The old adages “You are the company you keep” and “Birds of a feather flock together” are as true today as ever. Spend your time with positive people who genuinely value the same things you do.

4. You don’t stimulate your brain

Speaking of adages, here’s another: “The mind is a terrible thing to waste.”  How true, how true. Consider this: the average American watches 35.5 hours of television per week. We spend nearly as much time plopped in front of the tube as we do working a full-time job!

It goes without saying that television isn’t the best thing for your brain. This is particularly true for children. Scientists have linked prolonged television watching to antisocial behavior, lower verbal intelligence, and altered brain structure. (3)

5. You have no routine

Okay, so this isn’t saying that you need to plan your life down to the minute – but you should have some idea as to where your time is going. It is true that those who don’t manage their time are managed by it – and you can ill afford to waste your most precious resource.

People who underestimate themselves often under- or overestimate the time they have left. Instead, find a middle ground. Also, allocate some time to those things that will allow you to grow as a person.

Nutrients from food fuels the body and brain. When we are underestimating the importance of food, we are setting ourselves up to fail. We are undervaluing our physical and mental capabilities. Moreover, the fatigue that we encounter when we don’t eat right makes it easier to fall back into unproductive, unhealthy habits.

To rectify these nutritional inadequacies, focus on getting most of your food from fruits, vegetables, and whole grains. Keep the consumption of red meat to a minimum – instead opting for organic poultry and fatty fish.

People with social anxiety experience a profound feeling of anxiety and fear in social situations. A conditioned, intense anxiety or fear may leave the individual feeling as if they’re being watched, looked down upon, or negatively evaluated in either a performance or social situation.

It’s safe to assume that some level of unworthiness underpins the neural mechanisms producing social anxiety. Research shows that other environmental and genetic factors may also contribute to the disorder.

Research shows that the effects of bullying persist into adulthood. Per a study conducted by Duke University Medical Center, victims of childhood bullying are more likely to experience anxiety, depression, and suicidal ideation. Victims are also at an increased risk of developing disorders such as panic attacks and agoraphobia (fear of open spaces).

Bullying has profoundly adverse effects on self-image and self-worth that can last into adulthood. It is therefore not unusual that the person often undervalues and underestimates themselves as a result.

9. You are a chronic settler

If you underestimate yourself, you’ve probably have had one or more people tell you that you’re not living up to your potential. It’s also probable that you’ve settled for jobs and relationships that can be considered “beneath” you. (Whether you agree with such a sentiment is an entirely different matter.)

The point here is that people who undervalue their talents and abilities often find themselves in life situations that don’t satisfy the core of who they truly are. This deep dissatisfaction indicates you may be underestimating yourself! 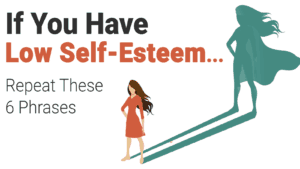 This last one is sort of related to people-pleasing. If you feel the innate need to over-explain things, you are likely underestimating some aspect of yourself. You may also feel misunderstood and think that explaining more should clear up confusion. Unfortunately, these added details often only further cloud the situation.

“[E]verything can be taken from a man but one thing; the last of the human freedoms – to choose one’s attitude in any given set of circumstances, to choose one’s own way.” – Viktor Frankl, psychiatrist, and Holocaust survivor

It is human nature to doubt yourself at times. We all do it – and we needn’t beat ourselves up over it. It is when this negative self-image, this underestimation of yourself, becomes the mind’s default state where troubles arise.

You deserve to live a life of contentment and fulfillment. No matter what is going on in your life, always remember that you are enough. You need not convince anyone but yourself of this pertinent fact.