Struggling with the social, medical, and financial consequences of bleeding gums? You’re not alone. Millions of people around the world live with gum bleeding, a condition that can cause bad breath, swelling, and loosened teeth, among other symptoms.

According to the CDC, approximately half of all Americans suffer from gum disease, a condition that occurs when plaque (a thin bacterial film) hardens under your gums and forms tartar. (1) In addition to gum disease (also known as gingivitis or periodontitis), bleeding gums can be caused by:

Gum bleeding is an inconvenient and dangerous condition that can lead to serious medical consequences. What are some of the most serious signs of bleeding gums?

For best prevention, follow a good oral hygiene regimen that will keep your teeth and gums in top condition. Good practices include:

1. Brushing your teeth gently with a soft-bristled toothbrush twice per day for two minutes.
2. Flossing once per day with a flat-surfaced dental floss.
3. Using a good mouthwash twice per day for 30 seconds or more.
4. Seeing a dentist regularly for check-ups and maintenance.

While an effective dental regimen is strong insurance against dental problems, sometimes you can’t afford repeated visits to the dentist. What can you do if you’re struggling with bleeding gums and want to treat your condition on your own? Fret not – here are 10 tried-and-true home remedies for gum bleeding that you can use at home.

For convenience and effectiveness, you can’t beat a simple hydrogen peroxide, baking soda and sea salt rinse for gum bleeding. All three ingredients are inexpensive yet powerful agents that have stood the test of time. You can find the products at the drugstore or supermarket, where they’ll only cost you a few dollars.

A powerful antiseptic, hydrogen peroxide has antibacterial properties which oxidize the mouth. In this 2017 study (2), it was found to be effective as a treatment for gum disease. Baking soda alkalizes the pH level of your gums, fights bacteria and addresses fungal infections in your gums. (A) Sea salt also alkalizes the mouth, allowing for a gentle treatment that doesn’t irritate the mucous membranes.

To make this rinse, combine these four ingredients in a glass:

Rinse with the solution for 1 to 2 minutes, twice a day.

As an alternative to a hydrogen peroxide rinse, Epsom salt is also a powerful home remedy for many health conditions. Its main medicinal effect for bleeding gums comes from its antibacterial properties, which get rid of the bacteria in our gums which causes inflammation and bleeding. You can buy Epsom salt at the drugstore or health food store, but be careful not to buy products that have essential oils or other scents added.

You can best use Epsom salt when mixed with warm water, which soothes and nourishes the gums and adds to the effectiveness of the remedy. For a great twice-daily ritual, follow these instructions:

1. Boil 8 oz water for 3 to 4 minutes and let cool until it is slightly warm.
2. Add 1 tsp Epsom salt and stir well. Let dissolve.
3. Gargle and swish the solution in your mouth for 1 minute and then spit out. Do not rinse.

One of the oldest, most effective home remedies for gum bleeding comes from ancient India, where it was used for thousands of years. Oil-pulling, or swishing a small amount of oil through the mouth, removes bacteria from the teeth and gums which can cause gum disease, cavities, and other dental problems. When properly used, oil-pulling can replace your need for a dentist, saving you thousands of dollars yearly in dental fees.

To treat bleeding gums, choose an oil that has antibacterial properties. Popular choices include a good sesame oil, olive oil or coconut oil. Take 1 tbsp of the oil and swish it in your mouth like a mouthwash for 20 minutes. At the start, you will only be able to swish for a minute or so but be persistent and you will soon be able to manage the full treatment.

After 20 minutes, the oil will have liquified in your mouth. Spit it into the toilet and brush your teeth thoroughly with a good toothpaste. There’s no need for flossing or mouthwash after an oil-pulling session. Repeat once daily for a perfect smile!

For a natural remedy used to treat bleeding gums, there’s nothing like aloe vera. Aloe vera is an East African herb which is used in the treatment of everything from acne to upset stomach. Its long green stalks are sold in supermarkets across the world, from Whole Foods to the neighborhood bodega.

Aloe vera’s antiviral, antifungal, antimicrobial and anti-inflammatory properties make short work of the bacteria which often cause gum bleeding. The herb also works to soothe the gums, thus helping in the case of gum bleeding caused by hormonal changes, medical conditions or denture-wearing.

To use aloe vera:

1. Take one stalk of aloe vera and wash it thoroughly with a mild wash.
2. With a knife, cut the stalk open lengthwise to expose the pulpy gel underneath.
3. Remove the gel and apply it to your gums in a thick layer.
4. Let it work for 15 to 20 minutes, spitting occasionally to keep from swallowing.
5. Rinse with lukewarm water.

Apple cider vinegar is a miracle product for millions of people who seek to cure their acne, manage their weight, and improve their health. As a treatment for sore and bleeding gums, its healing powers lie in acetic acid, which has anti-inflammatory and antimicrobial properties. You can find apple cider vinegar at your local supermarket.

To use apple cider vinegar:

1. Mix 1 tsp of apple cider vinegar with one cup of warm water.
2. Swish the solution in your mouth for 1 to 3 minutes.

For best results, use this rinse once daily.

Another healing remedy from India, neem is an herb that has been used for millennia as a folk remedy. With anti-inflammatory and antimicrobial properties, neem is extremely effective at controlling bacteria, irritation and fungal infections. In studies, it has been proven to be helpful in the fight against gum infection. (3)

To use neem, you can either chew on 1 or 2 fresh neem leaves (available in some countries) or use holistic products that contain high concentrations of neem oil. These can include toothpastes, mouthwashes, or essential oils. For best results, use these products after every meal.

Who knew that good old honey from the back of the kitchen cabinet could heal the gums? As an age-old remedy, high-quality honey has antibacterial and anti-inflammatory properties that address a wide range of gum concerns, from gingivitis to gums wounded by denture-wearing or conditions like leukemia.

For the best results, choose quality honey that has plenty of antioxidants in it. Things to look for include raw honey in liquid form, organic honey, locally-produced honey, and honey that is well within its expiration date. Store honey in a cool dark place to preserve its medicinal properties.

To treat bleeding gums, massage fresh honey into the gums gently with your fingertips. Let it sit on your gum line as long as possible without swallowing. Repeat twice per day or more for best results.

Since the time of the ancient Egyptians, essential oils have been used for healing and rejuvenation. Distilled from the leaves, petals, and resins of herbs and flowers, these potent oils contain the concentrated medicinal power of the plants. From acne to migraines, healers use essential oils to address a wide range of health complaints. 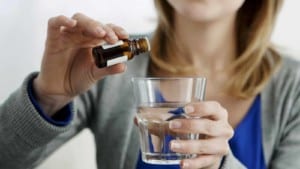