I’m always looking for new ways to improve my body. And for a while I have heard about apple cider vinegar. Well, let’s say I was not excited about the idea of drinking vinegar. However, I could not ignore the benefits that have been associated with this liquid.

It fills me up

I started taking apple cider vinegar between breakfast and lunch. And let’s just say that this drink really did help suppress my appetite. I stated eating less for lunch and dinner without snacking in-between meals. Within a week, I began to experience weight loss with apple cider vinegar. My weight was down a little over a pound. Best of all, it was easy to integrate apple cider into my daily routine. Yes, the drink took a little while to get used to. However, my body was able to adjust to the strong taste.

I began to see the results

I also started to feel healthier

As I continued to take apple cider vinegar, on a daily basis, my overall health improved. In the past, I would catch a bad cough during the winter months. However, my daily consumption of my water plus apple cider vinegar drink staved off any coughing fits.

I have a confession to make – going to the bathroom was an ordeal for me when I had to poop. After a month of taking apple cider vinegar, however, I found my digestion vastly improved. I am now about to poop once a day like clockwork. And let’s just say I don’t have to read half a magazine during my bathroom visit anymore. Apple cider vinegar appears to have helped my digestion. While I originally intended to use apple cider vinegar for weight loss, I’m sure glad that I’m able to experience healthier digestion as a side benefit. 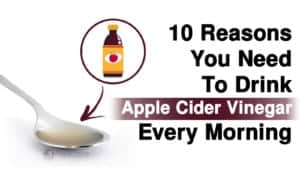 My skin is healthier

I now have more energy than ever

Weight loss with apple cider vinegar is just the beginning of my body’s transformation. My digestion is better, my both is healthier and my energy levels are way off the charts. In the past, I used to get burned out by the late afternoon. Today, I can spend the morning at the gym, breeze through an eight hour day at the office and still have the energy to party at night. Let’s just say apple cider vinegar will be staying in my daily routine for a long, long time.