Words can either build someone up or break them down, and we have to the power to choose our words carefully. Something that seems harmless to us might hurt someone else, so before we say something, we should always think about how it will affect the other person. Words carry energy, some positive and some negative. Words can change lives, or they can destroy them. We carry this power in our hands and hearts, so we must use it wisely.

We can teach children from a young age how to use their words to inspire, help, heal, and bring happiness to others. Adults would do well to remember what their parents and teachers taught them also, because we can easily forget lessons we learned years ago. With this in mind, a teacher came up with a brilliant idea to show children the impact that words can have on others, and this experiment stuck with each of the children long after. 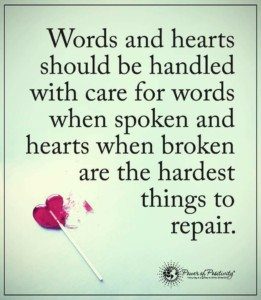 Rosie Dutton, a coach at Relax Kids Tamworth, used her experience working with children for 15 years and knowledge of teaching children to deal with their emotions in a healthy way to carry out this amazing experiment.

One day in one of her classes, she showed the children two different apples.

She then picked up the apple she dropped on the floor and told the children how she disliked the apple. She told them that she thought it looked disgusting, had a horrible color. And she pointed out how the stem was too short. She had a reason for this: she wanted them to dislike the apple too, calling it similar names.

“Some children looked at me like I was insane, but we passed the apple around the circle calling it names, ‘you’re a smelly apple’, ‘I don’t even know why you exist’, ‘you’ve probably got worms inside you’ etc.”

As she and the class continued their verbal attacks on the apple, the teacher and some students started to feel sympathy for it.

Then, they passed around another apple and started saying kind things to it such as ‘You’re a lovely apple’, ‘Your skin is beautiful’, ‘What a beautiful colour you are.’

She cut open the apple they had just passed around after the discussion to show the class how beautiful and fresh it looked on the inside. Afterwards, she cut open the other apple that she had thrown on the floor.

“The apple we’d said unkind words to was bruised and all mushy inside.

She saw the children make the connection, that the bruised, mushy apple had really undergone a beating even though you couldn’t tell on the outside. They also realized that how they talked to it represented what happens inside them when people mistreat them.

“When people are bullied, especially children, they feel horrible inside and sometimes don’t show or tell others how they are feeling. If we hadn’t have cut that apple open, we would never have known how much pain we had caused it…”

The teacher then shared a personal experience of what she felt when someone said unkind words to her the previous week. She explained that you couldn’t tell from the outside how she felt because she still smiled. But inside, she felt bruised and broken.

Everytime a child gets bullied, that only creates more unkind and hurt people in the world, as they sometimes act out or hurt others because of their pain. We can literally teach children kindness and compassion from a young age, therefore, creating a more gentle world.

“The tongue has no bones, but is strong enough to break a heart. So be careful with your words.”