The world is full of judgment and criticism. A lot of times it is driven by ego, but in the midst of all the arrogance and ignorance, there is fairness. There is hope and grace. Sometimes, changing your perspective is a way of dealing with all the unfairness out there. Other times it’s just accepting that there is a duality in our lives of good and bad; positive and negative; understanding and frustration.

Psychologist Marcia Reynolds says that, “The moment your brain determines someone is not playing by the rules, your abilities to deliberate, weigh all sides of an issue and make thoughtful decisions are impaired.”

But, how do you deal with the injustice and unfairness?

Here are 3 ways to deal with unfair people:

1. Stand up for what you believe in.

Author Suzy Kassem, wrote in her book, Rise Up and Salute the Sun: The Writings of Suzy Kassem, that “You are not for the left or right team, but for what is right against the wrong. Stand up for Truth even if it means standing alone.”

Regardless of what another thinks, if it’s going against your integrity, principles, and belief, you must stand up for the things that matter to you. Unfair people don’t see rational logic. They believe what they believe and it’s usually based on what they’ve been told to believe. They don’t think outside of the box. They stay within the ideas of bigotry and ignorance, usually dictated by the past. These people don’t care how things affect others as long as they get their way. When you stand for what you believe, you become a lighthouse leading others to follow. 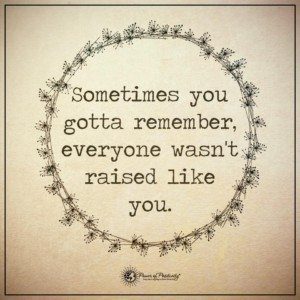 Imagine Martin Luther King, Jr. not standing alone and trailblazing his way into battling discrimination. He fought unfairness, radical bigotry at the time, and changed our lives with simple words of Truth, “I have a dream….” These words were not easy to express, not in a time that was violent and full of rage among the masses.

Standing up for what you believe disarms the person who can’t see past their judgment. You are not giving in to what they know. Standing up is allowing vulnerability to play a role, and that’s always difficult. It’s exposing yourself against oppression, inequality, abuse and outrage. But, sticking to your beliefs and principles is what forces us to transcend and evolve in this world.

2. You can’t change the past, but you can learn from it.

When we accept that we cannot alter the past, but make a difference in this moment, we allow for change to happen. Unfairness is a stagnant emotion that controls irrational perception. You can’t change how someone acts or reacts. But, you can alter the future by breaking the cycle of injustice.

There will be times that we must accept the unfairness and recognize that by doing nothing you are altering the future. We learn from past behavior. When we point out past events we can use the unfairness to our advantage. We begin to take the power away from being predictable to something that takes another by surprise.

You will not change unfairness. It will be here till the end of time. But, you can change how you view it and accept it. Unfairness becomes repressed anger that fuels the irrational person when their way is not received how they expect it. You begin to take their power by not giving into what you already expect from them.

We are more effective when we step back and analyze the situation before reacting. There are times that when we distant ourselves from the situation, it alters our perception. So, what we thought was unfair turns out not to be that big of a deal. We must diminish the immediate emotional response by not participating with the first thought. When you deal with an unfair person, you must recognize the source.

What is fueling their unfairness? What do they believe to be right? When you step away you begin to recognize that it’s important, and healthy, and allow their opinions to be what they are. You may never see eye-to-eye with them. You let go of the idea of controlling the situation before it controls you. We must learn to pick our battles wisely. There is a time and place for everything.