It’s not uncommon to believe that talking to yourself is a surefire way to tell that you’re losing your mind. But what if that belief didn’t hold any water?

The truth is that when you talk to yourself, you’re often benefiting yourself in many different ways. Don’t believe it? Science supports it! Here are 7 health benefits of talking to yourself, according to experts.

The stereotype of people who talk to themselves being “insane” is completely unfounded. Research has actually indicated that talking to yourself may result in more positive mental performance. When reading instructions aloud, individuals tend to concentrate and perform at higher levels than those who read their instructions silently.

One of the study authors is Paloma Mari-Beffa, a Psychology teacher and researcher with interests in Cognitive and Applied Neuropsychology. Mari-Beffa notes that the act of talking out loud, especially when the brain isn’t in the process of drifting, can actually indicate higher mental competency and, as such, improved cognitive function. This is because it is the act of using all possible means to increase the brain’s processing power.

Other studies produced similar results. For example, when talking to yourself, you have a higher chance of successfully finding items, indicating better visual processing. You are also more likely to learn to master complex tasks, which is especially visible in children.

Talking to yourself is a great method for organizing your inner thoughts and prioritizing your daily tasks. When you’re unable to organize those thoughts, you often wind up heightening levels of stress.

Unfortunately, stress isn’t just a random unimportant emotion. It results in many bodily processes, including ones involving hormone production that change the way your body functions. When needed, this helps you power through stressful situations. But when you’re stressed out all the time, this can have negative effects on your health, such as an increased risk of the following:

Even if your stress isn’t chronic, you can still experience negative health effects from stress, including:

Worse still, many “mild” symptoms of non-chronic stress can actually serve to increase stress levels, which is counterproductive and results in an endless cycle of negativity. Luckily, this can be stopped with many methods, and one of them is by talking to yourself.

In other words, talking to yourself might seem only minorly to affect your stress levels, but that reduction can work wonders for your overall health. Talk to yourself to organize thoughts, psych yourself up for something stressful, or give yourself a pep talk!

Loneliness can be tough to deal with, and many people who feel lonely worry that talking to themselves is a sign that they’re losing their sanity. According to licensed mental health counselor Aniesa M. Schneberger, this isn’t actually something to worry about. It’s comforting and helps to fill up quiet and empty spaces.

Don’t think that loneliness is much of a health risk to begin with? Think again! The Centers for Disease Control and Prevention outlines the following research-backed health risks that accompany loneliness:

Self-control is often a significant part of maintaining good health, especially when it comes to keeping certain impulses in-check. Talking to yourself can help you better manage these impulses, reducing your risk of falling for them.

In a study, participants were told to press a button only when a certain symbol showed up. With other symbols, they were told not to press the button at all. Certain participants were also told to repeat one word repeatedly to themselves, effectively cutting off their inner voice and preventing them from self-talking or self-processing.

This ultimately resulted in those with no access to self-talk pressing the button incorrectly more often. Study lead author Alexa Tullett stated that these results indicate that giving yourself messages is, in fact, genuinely effective in regulating different behaviors. Other scientific knowledge that supports this concept is as follows.

Toddlers speak out loud to control their actions, says psychologist Jean Piaget. For example, a toddler might cry “Hot! Hot!” when they accidentally touch something hot to tell themselves to move away from the object.

Non-human primates, while they cannot speak to themselves to control their actions, activate a different kind of memory in a different part of their brain to regulate their actions when performing certain difficult tasks. This indicates that they have their own version of self-talk that aids their behavior.

Sports professionals often talk to themselves to achieve better control and focus during their performances. The explicit instructions given to themselves via speech allows them to reduce impulsive reactions and play more effectively.

If you often find yourself retaining information, especially when it’s text-based or written, you will be happy to learn that you can improve your memory through the simple act of talking to yourself.

Research indicates that of four different methods of recalling written details, reading out loud carries the highest chance of proper retention. This had better results than:

Waterloo Department of Psychology chair Colin MacLeod, who is one of that study’s authors, posits that this is due to “active involvement.” The concept refers to adding an active element of measure or production to a retention task. In doing so, the retained item becomes more distinct thanks to that active element, allowing it to stay in long-term memory for an improved amount of time.

6.    Better Relationships With Others

When you utilize positive self-talk, you not only may be capable of increased positive thinking but have an easier time picking up the positive features of others. This can allow you to surround yourself with positive people while creating better empathy, thus fostering better and healthier relationships. This is according to counselor Elaine Mead, who specializes in Psychology and Criminology.

But what does this have to do with health? Well, loving and positive relationships can actually have surprising benefits for your body and mind. Here are some of them:

The positive hormones you get from good relationships and the motivation you receive for staying healthy can lead to a strong immune system. You’re less likely to get sick when you surround yourself with great people!

If you do get ill, good relationships can make that less dangerous. Cardiovascular assistant professor of medicine Benjamin A. Steinberg points out that people with strong support systems often enjoy better recoveries from illness.

Steinburg states that the good hormones produced when you’re around people you love, you’ll keep your heart healthy and your blood pressure low.

When you have positive relationships in your life, you are likely to enjoy better rates of survival. Kirtly Parker Jones, who works in Obstetrics and Gynecology, states that individuals tend to be healthier when married, leading to longer lifespans. This may be due to many other combined factors when involved with healthy and happy relationships, such as being motivated to drop bad habits.

If you find yourself experiencing an extreme emotional reaction to something, if done correctly, the act of talking to yourself can help you create rational and positive thinking. Start by simply removing yourself from the emotionally charged situation, then speak to yourself as a manner of talking yourself down.

Many people have already been practicing this method, and numerous anecdotes indicate it works well. But now, science backs it up too, as research shows that using third-person language to speak to yourself is actually the most effective way of doing this!

In research where participants are shown images that range from neutral to disturbing, lower emotional reactions are recorded in those who first talk to themselves in third-person language. Similar results when participants were asked to reflect on experiences that were difficult and painful to them.

When you refer to yourself in the third person, you effectively look at yourself in the same way you would a friend, says professor of psychology and lead research author Jason Moser. This gives you some emotional distance from yourself and lets you view the situation with more self-compassion and rationality. You’ll have better luck regulating your emotions when you can validate yourself and recognize the logical facts. 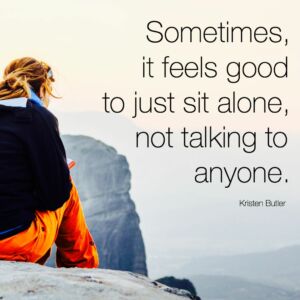 Final Thoughts On Some Health Benefits Of Talking To Yourself

So, there you have it! Talking to yourself isn’t just something normal and fine; it’s also healthy for you! Practicing the act of self-talk out loud is a great way to help aspects of your mental and physical health. If you’re truly concerned that your acts of talking to yourself are signs of a mental health issue, you can always speak to a professional for their medical opinion!