It’s easy to get caught up in searching for “the one.” If you listen to books, movies, TV shows and social media, once you’ve found them, you’ll “just know.” In fact, the idea of your other half being out there somewhere dates all the way back to Plato and ancient Greece! You can find plenty of articles about soul mate signs. If a healthy, committed, long-term relationship is your goal, however, here are at least three good reasons you should probably stop searching for your soul mate.

Here’s why you should stop searching for your soul mate:

1. Believing in a Soul Mate Can Make Relationships More Likely to End

Theories such as the “law of attraction” encourage you to believe that, with some positive thinking and believing in the magic of the universe, you’ll be able to pick up on the soul mate signs the universe is trying to send. This wonderful video from Alain de Botton helps to explain where some of our ideas about finding a soul mate came from, and why they can be harmful. Instead, Mr. de Botton argues for more “romantic realism” — acknowledging that love is difficult, and is going to require work and a consistent effort to understand ourselves and be kind to our partner.

The argument for a more realistic approach is supported by scientific research that shows belief in a soul mate can actually be harmful to relationships. People who believe in romantic destiny – that they have only one relationship out there that is “meant to be” – focus on their initial attraction and chemistry with someone, that is, whether they “click” immediately. When problems inevitably arise, however, then it can lead to the conclusion that they are simply with the wrong person – instead of working on making the relationship better, it’s time to move on to the next one. People who are less focused on destiny and more focused on relationships as a place to grow may not experience the same initial euphoria and passion, but are willing to put more work into relationships, leading to longer, more satisfying relationships over time.

2. Searching for a Soul Mate Makes it Less Likely You’ll Find One!

We’ve learned from the research described above that initial chemistry can be a very poor predictor of long-term happiness and compatibility in a relationship. Focusing too much on your initial attraction to someone might lead you to reject a potential partner too quickly, by refusing to give them or the relationship a chance. Dating coach Evan Marc Katz is a strong proponent of refusing to get too intoxicated by looks, money, and charisma, and instead looking for qualities like kindness, character, and consistency. His evidence?

Even though he didn’t have “that feeling” about his girlfriend, he realized that she listened, made him laugh, and accepted him for who he was – and decided to propose. Even though he didn’t “just know” it was right until six months AFTER he was married, it turned out to be the best decision that he ever made! Having doubts about someone when you first meet them and start dating is OK – it doesn’t mean they’re not “the one,” it just means you’re perceiving things realistically. 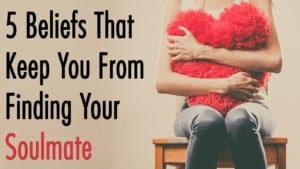 3. Soul Mates Can Be Made, Not Found

If you give up on the idea of finding your soul mate, does that mean you’re giving up on the idea of love? Not at all. More and more people – whether scientists, researchers, or philosophers – seem to be concluding that we can all learn to be better at relationships, and can take concrete, practical steps to learn and to grow. Essentially, we are imperfect people who can learn to love imperfect partners. Dr. John Gottman famously learned how to predict which couples would divorce with over 90% accuracy. By avoiding criticism, contempt, defensiveness, and stonewalling – particularly contempt – we can give our relationships a much better chance of success.