Are you looking for a way to experience a shift in consciousness without using drugs? Then all you have to do is stare into someone’s eyes for 10 minutes.

That’s according to a study performed by Giovanni Caputo, a vision researcher from the University of Urbino in Italy.

Here’s how staring into someone’s eyes can alter your consciousness:

Caputo asked 20 volunteers to stare into their partner’s eyes for 10 minutes. He noted astounding results. The volunteers reported having out-of-body experiences and seeing hallucinations of monsters, their relatives, and even themselves in their partner’s face.

This experiment included 20 young adults, of which 15 were women. The participants paired pair off and sat in a dimly lit room 1 meter away from each other. They had one simple task. They stared into their partner’s eyes for 10 minutes. And, they could make out the facial features of their partners in the dim lighting. However, they had a decreased perception of color.

In addition to this group of adults, a control group consisting of 20 more people also sat and stared for 10 minutes as well. One difference–their chairs faced a blank wall. Giovanni told them little else about the study except that it involved a “meditative experience with eyes open.”

After the ten minutes passed, all the participants filled out questionnaires and answered questions about what the volunteers experienced during and after the experiment. One of the questionnaires asked about any dissociative experiences that the participants had during those ten minutes. And other questions asked them what they saw in their partner’s face or their own faces.

Disassociation describes any psychological experiences that make a person feel disconnected from their immediate surroundings. This could include hearing sounds at a different frequency than they actually vibrate at, seeing distorted colors, or feeling like reality doesn’t exist. Most people report having these experiences when under the influence of drugs and alcohol. But now, you can get the same experience by simply staring into someone’s eyes!

In the journal Psychiatry Research, Caputo revealed that the eye-staring group scored higher than the control group in both questionnaires, proving that staring into someone’s eyes for even a short period of time can alter one’s consciousness in a measurable way.

According to a report written by Christian Jarett published in the British Psychological Society’s Research Digest, the participants “gave the strongest ratings to items related to reduced colour intensity, sounds seeming quieter or louder than expected, becoming spaced out, and time seeming to drag on. On the strange-face questionnaire, 90 percent of the eye-staring group agreed that they’d seen some deformed facial traits, 75 percent said they’d seen a monster, 50 percent said they saw aspects of their own face in their partner’s face, and 15 percent said they’d seen a relative’s face.”

A previous study by Caputo

Back in 2010, Caputo performed a similar experiment in which 50 volunteers stared at themselves in a mirror for 10 minutes. He wrote the results in a paper entitled “Strange Face In The Mirror Illusion.”

In that paper, Caputo reported findings very much like this more recent experiment. After about one minute, the participants in the former study reported seeing what Caputo calls the “strange face illusion.”

What did they see, exactly?

Everything from their deceased relative’s faces, distortions of their own faces, old women or children, and even animals and monsters. They somehow felt that their face had become deformed, or suddenly became foreign to them. They reported it as being a very profound, powerful experience. 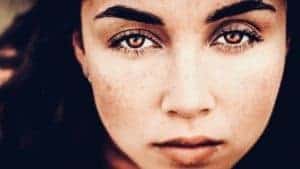 So, how does this phenomenon happen, exactly?

According to an article on Scientific American, Martinez-Conde and Macknik attribute it to something called Troxler fading and neural adaptation, In this, our neurons slow down significantly or even stop in the presence of constant, unvarying stimuli. So after staring at the same thing for a number of minutes, the unchanging stimulus away from the point of fixation will start to fade away. And that shift alters your perception.