In this world, we’ve all gotten accustomed to using our smartphones almost 24/7, being on call for our bosses at all hours, and burning ourselves out for the sake of making money. Many people in the world suffer from mental burnout, and long for some sort of escape. Where do we find solace and peace in a world that never stops moving?

In South Korea, they seem to be onto something, and they just might have the answer that the world desperately needs. 70 people came together at Ichon Hangang Park in Seoul, South Korea a couple months ago for the purpose of doing nothing for as long as possible. They put away their phones, forgot about responsibilities and schedules, and simply enjoyed stillness and the act of being.

In South Korea, Doing Nothing Is Now A Competitive Sport

South Korea holds an annual event called Space Out Competition, a contest to see who can “space out” for the longest without losing their focus. The crowd gathered to participate in this event. The visual artist who created the event in 2014, WoopsYang, said that the competition aims to show how overworked and stressed out people have become, and how sitting in silence for a while can greatly benefit the modern working man or woman.

“I was suffering from burnout syndrome at the time, but would feel extremely anxious if I was sitting around doing nothing, not being productive in one way or another,” she told a reporter for VICE. She realized that other people likely felt the same way. “I thought to myself, We would all feel better about doing nothing if we did nothing together as a group.” 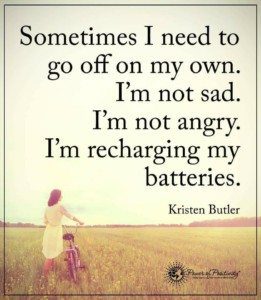 Ever since the first competition two years ago, the Space Out Competition now includes a panel of judges and a set of strict rules—no phones, no talking, no checking the time, and no sleeping. The competition seems to grow every year – WoopsYang said more than 2,000 people signed up to participate in the competition this year. As only 70 slots exist, she had to hold qualifying rounds to select the best candidates.

The event lasts 90 minutes, and in that timeframe, contestants can’t do anything except focus on doing nothing. However, the panel of judges does make an exception the rules – if a participant needs water or to use the bathroom, they can hold up a card to let the judges know. Falling asleep, laughing, or checking your phone counts as grounds for disqualification. Every 15 minutes, contestants’ heartrates are checked to see if they are relaxed enough, and the participant with the most stable heartrate wins. A commentator narrates the event to the crowd of curious onlookers.

Shin Hyo-Seob, a local rapper who goes by the name of Crush, took the gold this year. He lasted until the end with a few other participants, and had the most stable heartrate among them. “I was really determined to win,” he told VICE. “I practiced at home.”

“We would all feel better about doing nothing if we did nothing together as a group.” — WoopsYang

The competition helps to shed light on a very pressing issue that affects almost anyone in the working world from time to time. Research proves that the brain needs rest in order to process information, but more importantly, to alleviate the stress and burnout that we feel from being overworked and overstressed. South Korea unfortunately knows this feeling all too well, being ranked as one of the most stressed-out populations in the world.

Also, stress and anxiety don’t just affect those in South Korea, so WoopsYang wants to eventually have competitions worldwide in order to bring awareness to this growing problem. It seems that other places have begun to catch on, however, as there was an International Space Out Competition held in Beijing last year, where 80 participants showed up to chill out.

WoopsYang considers the competition as a form of performance art as well. They hold the competition during a busy part of the day (this year, it was on a Monday morning) in a crowded portion of the city (they held the first one in Seoul’s city hall, in a big city park this year) to show the stark contrast between the people focused on doing nothing and the chaotic city life surrounding them. “The best way to view this competition is from one of the surrounding tall buildings, looking down,” said WoopsYang. “You’ll be able to see a small patch of stillness amidst all the hectic movement.”

One of the coolest parts of the competition is that contestants are encouraged to wear outfits that they’d wear to work —suits, uniforms, etc—so that the group represents “a miniature version of the entire city,” she said. Furthermore, the competition seeks to highlight how any person in any career can get burnt out, but people from all walks of life can benefit from doing nothing. “I also try my best to choose the most diverse pool of people possible during the final stages of the qualifying rounds, in the hopes that it’ll allow every group in the city to be represented,” she said.

WoopsYang knows not everyone will see it as art, but she doesn’t mind. “I’m content with it being a form of entertainment,” she said. “I think I’ve provided an entertainment option that doesn’t involve technology or money”—or, really, doing anything at all.