“What physical processes underpin mental experience, linking mind and matter and creating the sense of self?”  This is the question that Tam Hunt and Jonathan Schooler at the University of California in Santa Barbara have asked themselves and formed a theory around.  Tam Hunt is a philosopher of mind, biology, and physics, while Jonathan Schooler is a professor of brain science.

The question essentially is asking what natural laws govern our perception of existence and is a search for the rules that relate mind and matter.  It is referred to as the “hard problem of consciousness.”

The Resonance Theory of Consciousness

The more complex the synchronization is, the more complex the consciousness.  The example Tam Hunt uses is the dynamics of our billions of neurons in our brain to create choices and decisions which form our perspective of the world as being highly complex.  In comparison, less complex objects, such as rocks, still have a vibration but are limited to “receiving information from the world.”

While the above is still a theory, it is based on decades of study and research.   This theory also correlates with the “panpsychist” view which is gaining credibility with neuroscientists, philosophers, and physicists, including neuroscientist Christof Koch and physicist Roger Penrose.  Panpsychist theory, according to Philip Goff, a philosophy professor at Central European University in Budapest, Hungary, is stated as such:

This theory is then further supported by Giulio Tononi’s “Integrated Information Theory.”  His theory states that “something will have a form of consciousness if the information contained within the structure is sufficiently integrated or unified, and so the whole is more than the sum of its parts.  Because it applies to all structures, not just the human brain, Integrated Information Theory shares the panpsychist view that physical matter has innate conscious experience.”

A further argument regarding these theories came from Eddington, the English scientist who confirmed Einstein’s theory of general relativity.  He argued, “… there’s a gap in our picture of the universe.  We know what matter does but not what it is.  We can put consciousness into this gap.”   Goff adds to this thought that “… it’s silly to suppose that the underlying nature has nothing to do with consciousness and then to wonder where consciousness comes from.”

There are variations of this panpsychist theory, which includes that the Universe as a whole is conscious rather than each individual particle.

5)        Sentience plays a part in consciousness and reality.

Theories regarding the Universe, humans, and other physical objects having a form of consciousness have already been discussed.  What about consciousness affecting reality?  How does sentience play a role here?

Part of the argument of the panpsychist theory is the discussion regarding information.  Prima facie is the logical theory that all sensory inputs can be broken down into bits of data.  That is how we essentially understand our brains to work. What scientists have not been able to figure out is how that information creates our experience.

Use AI for example.  We can input data into a system set to an algorithm which mimics how our brain breaks down information.  The AI can then mimic our reactions, but science has no reason to believe that AI is actually having an experience.  Scientists believe experience is only possible by an agent possessing consciousness.

“Scientists even question if there can be existence without experience or some fundamental idea of what is and what is not.  What meaning does information have without a system that integrates and experiences it? Scientists theorize then wouldn’t the entire system, the Universe, be the computer engine that produces meaningful data, and require sentience to be an integral aspect of reality down to the most fundamental level.”

In summary, using these theories and modes of contemplation, we can theorize that the Universe and all things within it have some level of consciousness and operate at a vibration that connects or communicates information with things in close proximity.

These vibrations relay information to the sentient being to have an experience, which then shapes its perception of reality.  Based on this idea, could the Universe also let you know when your vibration, or another’s vibration, is negatively impacting your reality?

10 possible warning signs from the Universe

Whether you contemplate the scientific theories here or prefer a spiritual or religious path, many do believe the “Universe” has ways to send warning signs to us that appear to go beyond coincidence, statistical probability, or the idea that “stuff happens.”  Things happen on a daily basis.  Yet, we always remember that one thing happened that, for some inexplicable reason, pushed us to change our life or way of thinking. 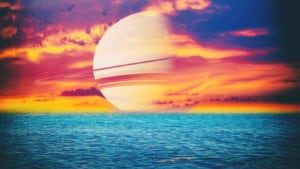 You consistently can’t find things, but normally, you always know where they are.  Maybe small things keep getting stolen.

No matter how well you plan, things keep interrupting your day and preventing you from getting to work on time, or picking up the kids, or just getting out the door for an appointment.

Suddenly every little thing you say becomes an argument with your friends, co-worker, spouse or kids.