First, let us define the word “secret” in a relationship setting, as it is used in this article. A secret is information that would be of concern to one’s partner that is intentionally withheld for any reason. It is essential to understand that the rationale for keeping a secret doesn’t matter here. As we will see, sometimes secrets are kept for benevolent purposes, but this still involves the withholding of information, which is a big no-no in a relationship.

Second, we must consider relationship duration and status to appropriately understand the complexity of keeping secrets and the resultant effects. In this regard, the act of keeping secrets applies to those in mature and committed relationships. (Read: no “casual” dating; no short-term dating, defined as anything less than six months to one year.)

Who is Playing Secret?

“Are gay people more likely to keep relationship secrets than heterosexuals?” This was the question underpinning the first published study about keeping secrets for one’s partner. Besides answering this question, psychologist Beth Easterling and her colleagues at East Carolina University uncovered some fascinating stuff about partners and secret-keeping. The study was published in the Journal of GLBT Family Studies.

Regarding her initial question, Dr. Easterling did indeed find that gay people are more likely to keep secrets from their partners than heterosexuals. Easterling cites dealing with a lifetime of prejudice and discrimination as the motivating force. In a society that is still largely ignorant about the nature of sexual orientation, many gay individuals have spent much of theirs a secret. Apparently, having to conceal one’s sexual orientation can manifest into other areas.

As part of her research, Easterling gathered comprehensive comparative data from heterosexual couples. According to the study, 60 percent of  431 participants reported ever keeping a secret in a non-platonic relationship. Twenty-five percent stated that they were currently keeping a secret from their partner. These percentages are slightly higher for African-Americans, females, and married folks when compared with Caucasians, males, and dating partners.

Then there’s the big two: why do we keep secrets? What kinds of secrets do we keep?

Why do we keep secrets?

“Many of my clients tell me they keep secrets from their partner because they think telling the truth will make things worse. Or they believe that their significant other simply couldn’t handle the truth…” – Terry Gaspard, Licensed Clinical Social Worker

It comes as no surprise that people in relationships keep secrets for a multitude of reasons. More women keep secrets out of fear of damaging the relationship or hurting their partner. More married people are motivated to keep a secret if they feel its disclosure would cause their partner to lose faith in them.

Regarding the last, researchers state that shame and fear of disapproval are two keys driving forces behind why many people choose to keep a secret from their committed partners. As honesty and trust are highly valued in relationships from a cultural perspective, the person maintaining a secret may feel pressure to keep up the façade. Relatedly, secret keepers may rationalize their behavior by telling themselves that omitting information is not the same as outright deception.

What kinds of secrets do people keep?

As you can imagine, there are numerous answers to this question, as well. Pretty much anything and everything has been kept a secret from an unsuspecting partner. While it’s difficult to ascertain the most commonly kept secrets, we can do a bit of research. Here are what a few studies have to say:

So, there you have it. Proof that the reasons for keeping secrets from your partner are as various as they are perplexing. Perhaps we should rephrase the question another way: what kinds of secrets shouldn’t you keep from your partner? Let’s get after it.

“(You) don’t have to share every minute detail about your life with your (partner); however, there are certain secrets you just can’t keep.”

We can go back and forth as to whether keeping secrets is ever okay. Some say it is, and some say it isn’t. But most people will agree that these are the seven secrets that you should never keep from your partner:

1. Negative emotions towards your partner

If you’re lugging around anger or resentment towards your partner, you need to nip it in the bud like yesterday. Whether you realize it or not, you are probably displaying negativity towards him or her. Regardless of what they’ve done, they deserve transparency. Get whatever it is off your mind. Talk about it with your partner if you need to, and take things from there.

Listen, we all know that times are tough. Wages haven’t kept up with prices and, regardless of what the latest job report says, many people are working jobs that don’t pay nearly enough. All of that aside, you need to be transparent about any financial skeletons. Credit or debt issues, cuts in pay, bankruptcies, liens – all of that is going to come to the surface eventually. Just get it all on the table and figure it out. They’ll love you anyway (even if they’re mad as hell at first.)

Okay, so…yeah. There is no way of soft-balling the issue, so we won’t try. Infidelity is a big deal in the context of a loving relationship. Be that as it may, it does absolutely no good to try and “swallow” your guilt or whatever destructive emotion you’re feeling. When you do this, you’re not fair to yourself or your partner. You’ll merely end up in a miserable mental state, and they’ll become increasingly suspicious. The relationship may or may not end, but you owe them the truth. 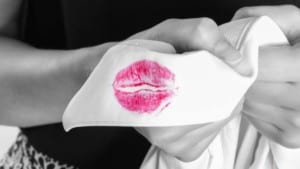 Here is another significant “personal problem” that your partner – if they truly love you – will be all too eager to help solve. Most people who “hide” their addiction and substance abuse problems do so out of embarrassment and shame – and such feelings are understandable. It’s critical to know, however, that substance abuse and addiction issues have less to do with personal weakness, and more to do with genetics and environmental factors. With honest, the support from your partner, and a resolute attitude, you can overcome substance abuse.

If you suffer from serious mental or physical health problems, you must absolutely inform your significant other (ideally, before they become your partner.) Health problems, whether they influence your state of mind or your body, are to be fully disclosed. The odds are that, at some point, your partner will need to care for you or seek the assistance of someone who can. Telling your partner about any serious health condition is both morally and rationally justifiable.

If there’s something in your past that will affect your partner’s life, you owe it to them to tell the truth. Before you do, please understand that it’s okay to be ashamed of something you’ve done. This shows that you care about your behavior, and that you are (hopefully) making an effort to change. There is no need for you to revisit and regret the past, but there is a need for you to own up to something when it influences someone else’s life. So, own up – and move on.

Okay, so we’re not talking about the in-laws (it’s okay to be quiet here!) but problems with your immediate family. For example, if you and a sibling are not on speaking terms, it is befitting to tell your partner. If your dad is bringing a mistress to the family gathering, whisper in your partner’s ear. You can bet that your partner’s family has a fair bit of “dysfunction” too! Explain the serious stuff and laugh about the rest.

Remember to love – and to love often…