After seeing a heartbreaking photo on Facebook of a starving seven-year-old orphan with special needs, Priscilla Morse flew all the way to Bulgaria to adopt him.

When she made it to the Bulgarian orphanage to sign all the adoption papers and finalize the process, Ryan weighed just seven pounds and had extra hair all over his body due to malnutrition. His skin looked ghostly and pale, and due to his condition, doctors didn’t have much hope for him.

However, in spite of all this, Priscilla and her husband felt called to adopt Ryan. They both felt confident that Ryan could improve with the proper love and care, and plus, they had both already adopted their seven-year-old daughter McKenzie in 2012 from an orphanage in Russia. She has Down syndrome and a congenital heart defect, but this didn’t stop her adoptive parents from trying to give her the life she deserves. They want the same for their new son, Ryan.

Already after just over a year with his new family in Tennessee, Ryan is showing dramatic improvements. He’s been steadily gaining weight, and currently weighs 23 pounds. He’s starting to babble like a baby and even moves a little bit on his own. He smiles now just like any healthy, happy 8-year-old boy should, and pictures of him taken this month show just how much he’s improved over the past year.

You’ll see in the photos below that, compared to a year ago, Ryan has gone through quite an astonishing transformation. After being adopted in November 2015. Ryan weighed 7 pounds. Mrs. Morse told DailyMail.com that she first learned about Ryan back in June 2014 on an adoption page on Facebook.

She and her husband David decided pretty quickly that they wanted to adopt Ryan.

So, toward the end of October 2015, Mrs. Morse flew halfway around the world to Bulgaria to finalize Ryan’s adoption. Due to his worsening health and the doctors’ predictions, Morse thought Ryan might die before she could even finish the paperwork.

‘The first meeting was pretty scary,’ Mrs Morse told Inside Edition. ‘He was bones and skin, he literally looked like a skeleton. The first thing that went through my head was, “he’s going to die.”‘

As soon as she brought Ryan to the U.S. in November 2015, she rushed him to Vanderbilt Children’s Hospital where doctors put Ryan on a feeding tube immediately.

‘I had never in my life seen doctors look at a child and burst into tears,’ she said. ‘They did call social services. They said, “I’m sorry, he’s probably going to die.”‘

Ryan spent his first two weeks in America in the hospital, where he was monitored and given the proper care for his condition. Then, he was released and readmitted shortly afterwards for an additional month.

Since coming to America, however, Ryan has gained a considerable amount of weight and shown other signs of improvement, such as losing the layer of hair that once covered him due to malnutrition. He’s also gained color in his lips and skin as his health has improved over the past year.

The Morses have even been able to enroll him in public school where he will continue to improve under the guidance of a special needs teacher. 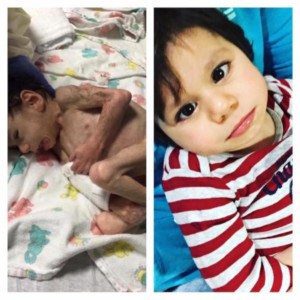 Doctors have determined that Ryan has cerebral palsy, microcephaly, scoliosis, clubbed feet, and dwarfism, which explains his small size. Despite all of these problems, Ryan has made great progress, all because two people believed in him and literally saved his life.

Related article: This 8 Year Old Saw His Friend Denied Lunch Because of No Money…Then Buys Lunch For Hundreds

‘His progress has been nothing short of a miracle in my opinion. The first time I saw him I couldn’t even formulate a sentence. I was convinced he would die before I got him home and now he is a happy, giggly, active boy,’ Mrs Morse told DailyMail.com.