The more humans encroach on wildlife and the natural environment, the more species will be driven to extinction. The California pipevine swallowtail is a gorgeous blue butterfly that has called San Francisco home for hundreds of years. However, since urban expansion has been increasing since the 20th century, sightings of this butterfly have steadily declined.

To give you some background on the pipevine swallowtail, the butterfly’s life begins inside little red eggs that lie on top of leaves and tree branches. Then, the eggs crack and black caterpillars with orange spots emerge, eventually transforming into the breathtaking blue butterflies.

Tim Wong, an aquatic biologist, made it his mission to repopulate this beautiful creature, right from the comforts of his backyard. Wong is an aquatic biologist at the California Academy of Sciences and has always appreciated nature deeply. His Instagram account shows endless pictures of Tim with the animals he takes care of at the school’s museum, including penguins, owls, snakes, lizards, and, of course, butterflies.

Tim first started getting interested in butterflies in elementary school, where he attempted to raise them with his classmates. Tim was fascinated at the transformation butterflies make and wanted to study them further.

Years later, when Tim learned how the population of pipevine swallowtail was on the decline, he decided to help them make a comeback. After doing research about the butterfly in the caterpillar stage, he realized that they would only eat the pipevine plant, which had also become rare in California.

Tim luckily found the plant at the San Francisco Botanical Garden and asked if he could have a few clippings. Using the plant, Tim built an entire greenhouse in his backyard to imitate the butterfly’s natural habitat. “[I built] a large screen enclosure to protect the butterflies and to allow them to mate under outdoor environmental conditions — natural sun, airflow, temperature fluctuations,” says Tim.

He started his breeding experiment with a group of 20 caterpillars that he found at local residences.

This experiment that began with just 20 caterpillars resulted in thousands of butterflies that Tim brought to the San Francisco Botanical Garden, and he doesn’t plan to stop there. He has also grown more than 200 California pipevine plants so that the butterflies always feel at home and have their natural diet available to them.

This is wonderful news for the repopulation of the pipevine swallowtail. “Each year since 2012, we’ve seen more butterflies surviving in the garden, flying around, laying eggs, successfully pupating, and emerging the following year,” says Tim. “That’s a good sign that our efforts are working!” 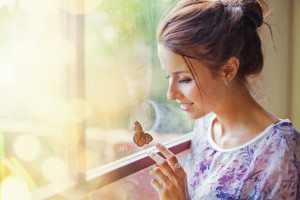 Wong has been the perfect example to show that anyone can help bring nature back from their own homes. Of course, breeding butterflies is no easy task, but there are other ways to help preserve the environment. Simply planting flowers and plants that local animals and insects like can help to preserve their populations.

What do you think of Tim’s successful attempts to repopulate this beautiful butterfly? Have you ever done something to help your local environment? Share with us in the comments!