While it is not unusual to feel tired from time to time, constant fatigue could be the body’s way of alerting you to an underlying health problem. In many cases, chronic fatigue can be a sign of iron deficiency, which, coincidentally, is the number one nutritional deficiency worldwide.

Iron plays a critical role in the production of hemoglobin, which is the iron-containing oxygen-transport metalloprotein in the red blood cells that help circulate oxygen throughout the body. If you are deficient in iron, the body will have to work harder to achieve the energy it needs to function optimally. This, in turn, can leave you feeling exhausted, irritable, and weak.

Low iron levels can also result in an inability to focus.

In this article, we will take a closer look at the full impact of iron deficiency on the body and how to boost your iron levels naturally.

Iron deficiency symptoms can vary from person to person. In fact, some people may not experience any of the tell-tale signs of low iron levels until after the condition has given way to anemia. In these cases, the symptoms and the severity of those symptoms will depend on the individual’s age, how quickly they became anemic, and their current state of health.

To accurately diagnose iron deficiency-related anemia, blood tests will need to be needed. These tests will confirm if a patient has an iron deficiency. It will also identify factors that may have contributed to the condition in the first place.

Low iron levels can be caused by a variety of things, including poor eating habits. Underlying health problems, such as inflammatory bowel diseases like Crohn’s disease and ulcerative colitis, may also cause low iron.

In women, low iron levels can sometimes stem from either pregnancy or heavy menstrual cycles.

To accurately diagnose an iron deficiency, a blood test that measures ferritin levels, which are the iron stores in your blood, will be needed. However, the following signs and symptoms may indicate low iron levels. If you experience many of these, you might want to visit a physician as soon as possible:

While feeling overtired is generally no cause for alarm, being constantly tired, however, may be the body’s way of alerting you of low iron levels. This very symptom affects more than half of those who are iron deficient, according to the National Institute of Health.

Because many of us lead busy lives, we tend to overlook chronic fatigue. If such feelings persist even after getting a fair amount of sleep, you should seek medical attention as soon as possible.

Another common symptom of low iron levels can include pale skin. A pale coloring may also affect the inside of your lower eyelids. These symptoms are both caused by a decrease in the production of hemoglobin.

In essence, hemoglobin is what makes blood red and allows us to have rosy-colored skin that signifies good health. When this production is interrupted, various skin surfaces will become noticeably pale.

The same applies to the inside of the lips, gums, and nails. More often than not, paleness is a byproduct of low iron levels. However, blood tests will be needed to confirm that this is the case.

In addition to contributing to our healthy, rosy color, hemoglobin is also responsible for transporting oxygen throughout the body. If the production of this protein is interrupted due to an iron deficiency, oxygen levels can fall dangerously low. This can make even routine tasks like walking or climbing stairs very challenging.

Experiencing shortness of breath from time to time is not uncommon, especially if you’re exercising or engaging in other physically demanding activities; however, prolonged breathing problems, particularly while in a state of rest, may suggest low iron levels and should be addressed by a physician.

In some cases, low iron levels can give way to headaches and dizziness. Similar to breathing problems and paleness, these symptoms can stem from inadequate hemoglobin production.

In short, if enough hemoglobin does not reach red blood cells, the brain is then deprived of the oxygen it needs. This, in turn, causes blood vessels to swell, creating intracranial pressure that results in headaches and dizziness.

Basically, the combination of low hemoglobin levels and poor oxygen circulation places more strain on the heart, which results in irregular heartbeats.

When the body is iron deficient, oxygen that would have ordinarily gone to hair and skin gets redirected and used for other purposes. As a result, hair and skin become noticeably dry. In some cases, hair loss may also occur.

Along with hair and skin, brittle nails can also be a byproduct of low iron levels. Initially, most people will notice that their nails have become prone to chipping and breaking. As iron levels continue to drop, the center of the nails will become dented, taking on a spoon-like appearance.

It is not uncommon for those who are iron deficient to experience swelling of the tongue, dry mouth, and soreness. These symptoms that affect the oral cavity are typically the result of low hemoglobin and myoglobin levels.

HOW TO REVERSE IRON DEFICIENCY NATURALLY

Now that we have a general understanding of how low iron levels can impact the body, let’s take a look at 3 proven ways to reverse iron deficiency naturally:

Making changes to your diet is a great way to boost your iron levels naturally. Most physicians, nutritionists, and dieticians will agree that consuming iron-rich foods can go a long way toward restoring normal and healthy iron levels. 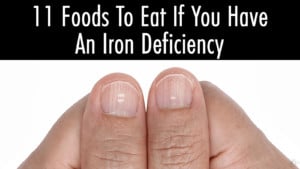 To improve how your body absorbs iron from these foods, consider upping your intake of vitamin C. Studies show that healthy levels of vitamin C make it easier for the body to absorb non-heme iron, which is iron typically found in plant-based foods like grains, beans, vegetables, fruits, nuts, and seeds.

Also, as you increase your iron intake, you will want to gradually start consuming more iron. A dramatic increase can cause stomach pain, constipation, diarrhea, and other digestive problems.

While you should aim to get your daily vitamins and nutrients from whole foods, taking supplements can also help boost your iron levels. Taking 2.4 micrograms of vitamin B-12 every day, for example, can keep you from feeling anemic and will eventually bring your iron levels into a healthy range.

Women who are pregnant or nursing should aim for 2.6 micrograms of this vitamin per day. Iron supplements can also boost low iron levels; according to hematology.com, those who are iron deficient can benefit from taking 150 to 200 mg per day of elemental iron.

If you decide to take supplements, you should speak with your physician. He or she can recommend a proper dose based on your specific health needs. Regardless of your choice in supplements, it can take a month or more before your iron levels return to a normal and healthy range.

To help your body absorb the iron received from whole foods and supplements, limit the amount of coffee you drink. Studies show that coffee contains tannins, water-soluble polyphenols that can interfere with iron absorption. Ideally, you want to avoid drinking coffee at least 3 hours before consuming foods that are rich in iron.

Being iron deficient can have serious health consequences. According to the Centers for Disease Control (CDC), anemia and iron deficiency has claimed the lives of over 5,000 individuals since 2016. If you’re iron deficient and struggling with anemia, follow the tips in this article that detail how to reverse iron deficiency naturally. Also, schedule an appointment with a physician as soon as possible.