When you have a bad day or just feel down in the dumps, you might treat yourself to your favorite food, sit down in front of Netflix and forget your problems, or socialize with friends to boost your spirits. However, psychologists reveal that the key to feeling happier might lie in a totally differently place than we previously thought. It turns out that a better mood is only one action away, and it really doesn’t take a lot of effort, either.

Psychologists Reveal: Taking This Single Action Is The Best Way to Boost Your Mood

A new study published in the journal Emotion found that treating ourselves will boost our mood no better than doing nothing at all. In other words, we could sit at home and do absolutely zilch, and it would have the same effect on our mood as treating ourselves to our favorite dessert or movie.

Surprisingly, the research discovered that by giving to others, volunteering, or performing acts of kindness, we can boost our mood and overall outlook on life, explained Dr. Katherine Nelson, lead author of the study and assistant professor of psychology at the University of the South in Sewanee, Tennessee.

“I was not surprised that prosocial behavior led people to feel greater positive emotions, and in turn, greater flourishing,” Nelson said.

Nelson also explained that she found it interesting that directing positive actions toward ourselves shows no improvement in our mood at all, which stands in stark contrast from what we’ve been led to believe. Commercials and advertisements constantly tell us to “treat ourselves,” but now we can see that this won’t really make a difference in how we feel. Nelson’s findings show that treating others instead of ourselves leads to greater psychological well-being.

The researchers gathered 473 volunteers and separated them into four groups, with each group assigned to different tasks over the course of six weeks.

One group had to complete acts of kindness that would improve the world, like picking up litter. The second group performed acts of kindness for others, such as buying lunch for a friend or helping a family member with chores.

The third group had to treat themselves to something, such as a day off work or working out more. The researchers made the fourth group the control group, which meant they didn’t have to change their daily routine or tasks. 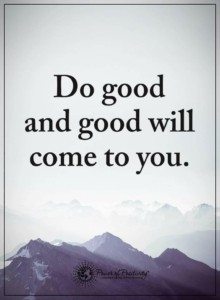 Prior to and after the study, all participants had to fill out a questionnaire to assess their psychological, emotional, and social status. They also kept note of their emotions throughout the course of the study.

Not surprisingly, the researchers found that participants who performed acts of kindness, whether for others or the world at large, experienced more positive emotions than the group who treated themselves as well as the group who changed nothing.