Procrastination is defined by Oxford English Dictionaries as, “The action of delaying or postponing something.” More interesting is OED’s example phrase for the word: “Procrastination is the thief of time.” It is most certainly that.

It’s not hyperbole to say that procrastination is the killer of ambition, energy, happiness, and success. The procrastinator – a title that applies to every one of us, at times – wants to stop this incessant delaying. The question is not a matter of desire, but self-control, knowledge, and implementation.

In this article, we’re going to discuss ways to defeat the procrastinator in us all. Of course, it is not as simple as barking out (or typing out) instructions. As overcoming procrastination involves a shift in mindset – no small feat, that – we must approach this shift methodically and scientifically.

Regarding the last point, it is essential to understand the why’s behind the act of procrastination. According to psychologists, this knowledge can help us to beat procrastination. This is because the mindset which gives rise to procrastination involves three truths that, once acknowledged and remembered, can go a long way toward not only helping relieve us of the habit but also of the guilt that often arises from the habit. These three main points are: (1) procrastination is a very human thing, (2) procrastination has its origins in evolution and neurology, and (3) we can do something about it!

#1 Procrastination Is A Very Human Thing

“While procrastination seems like a character flaw, it evolved for a reason.” – The Genetic Literacy Project

According to psychologists and professors Joseph Ferrari and Timothy Pychyl, there are ten things that people should understand and remember about procrastination. Doing so will help to sweep up some of that regret, anger, and confusion that often follows when we procrastinate. As you will see, this knowledge will put you in a better position to call yourself out before it takes hold.

Here is procrastination at a glance using ten points:

#2 Procrastination Has Its Origins in Evolution and Neurology

To understand the evolutionary and neurological roots of procrastination, we must first discuss cognitive planning. Per Wikipedia, “Complex planning is one of the executive functions … (involving) neurological processes involved in the formulation, evaluation, and selection of a sequence of thoughts and actions to achieve a desired goal.”

Our brain has the ability to reject planning at the subconscious level. So, if your subconscious mind “thinks” that your plan is worthless, do you think that you’ll dive into some project head first? Highly unlikely. You are more apt to find something else to do. All the while, your conscious mind is trying to rationalize why you are putting off that important project (and failing miserably!).

Why have we evolved only to adopt the apparent self-sabotaging act of procrastination? This question is a bit complicated. Long story short, we’re much more intelligent and intuitive than we think. To illustrate, let’s use the following complex planning scenario, courtesy of Dr. Cal Newport: “Sharpening a spear and charging a mammoth, and sharpening a spear and throwing it at the mammoth are both complex plans. Early Homo sapiens could … notice that the latter plan, with its much reduced risk of trampling, was the better choice.”

Now, here’s a rhetorical question followed by a critical point:

If your subconscious mind knew – even if your conscious didn’t – that tossing the spear may prevent you from getting trampled by a mammoth, is there a chance you’d think twice before charging a ten ton woolly mammoth?

Dang right! And you can bet that many of our hunter ancestors felt the same anxiety masquerading as procrastination. The lesson of the story: It may feel as if we’re unnecessarily delaying for no good reason when in fact our subconscious knows that there’s a better way.

Besides the normal evolutionary and neurological mechanisms of procrastination, there also appears to be a potential link with various mental health disorders. More specifically, mental health conditions that decrease the brain’s levels of the neurotransmitter dopamine. Not only does this make sense from a commonsensical perspective, but a biological one.

#3 We Can Do Something About It!

Now for the part we’ve all been patiently waiting for! Here are seven science-backed ways to beat procrastination, based off psychologist Timothy Pychyl’s research on procrastination.

Remember when we talked about the role of cognitive planning in procrastination? Well, it must be understood that the subconscious part of this process is strictly non-verbal. This means that when the circuits just beyond conscious thought object to our current plan, we won’t hear “Wait, stop!” or “Try this!”

Instead, our subconscious will attempt to get our attention by manifesting a bunch of unpleasant emotions. Learn to label the emotions of anxiety, boredom, fear, incompetence, indecision, and overwhelm – and you will be well on your way to beating procrastination.

Our brain has two modes: a default mode and focused mode. The default mode is impulsive, lazy, and loves to make excuses. The focused mode tunes in and locks on. Guess which one is conducive to doing good work and beating procrastination?

Of course, it isn’t always easy to fight distractions and overcome procrastination. You will fail at times. But if you invest even a few minutes a day building your attentional capabilities, you’ll find that it’s much easier to pay attention to work – even when it’s boring.

When procrastination begins to seep into the conscious mind, the uber-intelligent brain will “reward” us by providing excuses. (Thanks, brain!) By learning to spot rationalizations, we can hold ourselves accountable and get back into the right frame of mind. Here’s a short list of some of the more common rationalizations:

This one is all about recognizing procrastinating activities for what they are – time wasters – and then getting back to work. Some of the more common types of procrastination include:

Notice if these time wasters always seem to come up when starting a hard task. If so, your mind and body may be playing tricks. Ask yourself if what you’re thinking about can wait. If not, that’s okay. Do what you need to do and then get back after it.

It’s quite incredible just how creative the mind gets when it wants to avoid the hard stuff. One way it does this is by conjuring up a bunch of activities that are work in appearance only. Get around this by breaking each goal down into actionable steps, or “bricks.”

Think of a house or building project. Progress is always measured incrementally or, to use a corny analogy, brick by brick. Make sure you do the real (read: hard) work by laying only those bricks necessary to achieve your goal.

The pain and discomfort of procrastination is at its peak before you start doing a task. As soon as you start, the amount of pain falls drastically. (Google “Procrastination Pain Graph” if interested.)

Anyways, forgo the need to have everything planned out and just begin. By doing so, you’ll feel much better and much more inclined to finish. 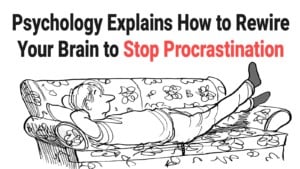