Those first few weeks after bringing a baby into the world are a fraught time for new mothers. For most, this first chapter in baby’s life is characterized by sleep deprivation, recovery from the physical ordeal of birth, and struggling to find a new sense of normalcy in the cycle of diapers and late-night feedings.

Between this sudden upheaval at home and the huge hormonal fluctuations occurring inside a new mother’s body, it’s understandable that many women find themselves feeling anxious, weepy, and irritable; the is state popularly referred to as “baby blues.” But for some mothers, these emotional irregularities represent a much more serious condition.

What is Postpartum Depression?

Postpartum depression is a condition as common as it is misunderstood. According to the American Psychiatric Association, as many as one in seven new mothers will experience symptoms of postpartum depression (or PPD) after giving birth. But what sets PPD apart from the more benign “baby blues” reported by the majority of new mothers? And how can you tell when it’s time to seek professional help?

Before we delve into the eight signs of postpartum depression, let’s take a closer look at baby blues so we can better differentiate between the two. According to the Mayo Clinic, baby blues can include any combination of the following symptoms:

The most important thing to note about these symptoms is that they typically only last for a few days up to a couple of weeks after your baby’s birth. If these symptoms persist in duration or intensity, then postpartum depression may be to blame.

Postpartum depression symptoms usually begin within the first few weeks after giving birth, but in some cases they may set in much earlier — even during pregnancy — or much later, even up to a year after giving birth. Over time, these symptoms may interfere with your ability to bond with and care for your child, which is why early intervention is so necessary.

Eight Postpartum Depression Symptoms to Watch Out For

1. You’re Having Difficulty Attaching to Your Baby

Most of us have heard new mothers and fathers talk about the rush of instant love they felt when laying eyes on their new baby for the first time. We’re told this sense of adoration is unlike anything we have ever felt before, that it’s a love more intense and profound than anything we can imagine prior to becoming parents.

Reality, however, is more complicated than that. A truth seldom discussed openly is that many parents take longer to form a bond with their infants. They develop a sense of affection over the first few weeks of their baby’s life rather than in the seconds immediately following birth. This is normal and should not be mistaken for a sign of depression.

However, if weeks after giving birth you find you still have no sense of attachment to or affection for your baby, this may signify that you are experiencing postpartum depression symptoms.

2. You Have a Constant Fear of Being a “Bad Mother”

Every new mom has moments of feeling like a failure for missing one of baby’s cues or making the sort of mistakes every first-time parent makes. But a persistent, unremitting sense that you are unfit to be a mother may signify more than just anxiety and negative self-talk. It can be a sign of postpartum depression.

If you notice that more of your waking hours are spent worrying whether you’re caring for your baby correctly than just reveling in the tender moments of new motherhood, consider seeking professional help.

It’s no secret that new parents are short on sleep. But if you find yourself unable to sleep even when your baby is napping, or wide awake all through the night even after a long, arduous day, it may be time to see a doctor.

It goes without saying that all new parents can expect to experience some loss of sleep. However, ongoing irregularity in your sleep cycle is a probable sign that you’re experiencing something more than just the hectic schedule associated with having an infant at home.

4. You’ve Lost Interest in Things You Once Enjoyed

If, in those few moments of respite from tending to your new baby, you find yourself unable to enjoy a favorite TV show, book, or meal, depression may be the culprit. The same goes if you find yourself with little motivation to get out of the house or enjoy a day to yourself while somebody else looks after the baby.

Loss of enjoyment in favorite activities is a common feature of depression in adults, and PPD is no different. If it feels like the happiness has been sucked out of activities that used to bring you joy and satisfaction, or if you can no longer relish having a whole afternoon to yourself, a doctor’s visit is a good idea.

Every new mom feels occasional anxiety while caring for a newborn. There are lots of unanswered (and sometimes impossible to answer) questions about whether you’re making the best choices for your baby, whether you’re doing it “right.” This is normal when you’re first learning how to be a parent. 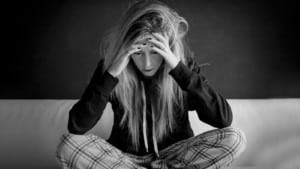 But if the anxiety has you in its grip and won’t let go, it may be a postpartum depression symptom. If, for example, you can’t comfortably leave your baby at home with your partner or a parent without feeling the need to call and check in, this may mean your anxiety is related to PPD.

6. Feelings of Worthlessness or Hopelessness

Even in times of intense struggle, most of us are able to talk ourselves through with reminders that this condition is only temporary, and there is light at the end of the tunnel. But if you’ve stopped seeing that light and can’t envision a time where you no longer feel as drained, anxious, or unhappy as you do right now, that’s probably the voice of postpartum depression talking.

It’s normal to feel bleak in times of great struggle, but if your self-talk is “Life is going to be this way forever,” that’s a sign that now is an opportune time to seek professional help.

7. Recurring Thoughts of Death or Suicide

If your sense of hopelessness has become so severe that you find yourself fantasizing about death or contemplating suicide, do not delay: Make an appointment with your healthcare provider as soon as possible. This is one of the most unambiguous postpartum depression symptoms and a clear sign that you need immediate professional help.

Seeking help in this condition can feel deeply shameful to some. Mothers, after all, are supposed to love their babies unconditionally, and to love motherhood. But sometimes our brain chemistry just doesn’t allow for those loving feelings, and that is not your fault. It simply means you need more support than you’re getting.

8. Thoughts of Harming Yourself or Your Baby

This is the most urgent symptom of postpartum depression and a sure sign that you should seek medical attention as soon as possible. Self-harm can be deadly even when it isn’t intended to be fatal and the impulse to do it should be treated as the emergency it is.

Thoughts of harming your baby can also represent a more serious psychiatric condition known as postpartum psychosis. This condition typically appears in the first few weeks after birth and can present with some very frightening symptoms, including: