By Power of PositivityPublished on December 14, 2015Last modified September 11, 2020

Over centuries, our amazing brain has evolved to make decisions and respond quickly to threats for our safety and survival.  When we stress, worry or have negative thinking, we trick our brains into believing that there is an immediate threat. As a result, our fight or flight response kicks in to deal with the event.

Our brains are pre-wired to respond to negative thoughts and feelings more quickly. When we think positively, our brain assumes that everything is under control and no action is needed.

But, we have to ask ourselves, how much of the stress, worry and negative thoughts we think today are actually life threatening? Recent studies show that psychological stress is causing an overuse of this powerful safety system, weakening our immune system and causing disease to set into our body. Yikes, negative thinking is causing more harm to our bodies and brain than we realize.

How Negative Thinking Affects Your Brain

A study in the Journal of Clinical Psychology studied the effects of worrying on performing a task. Subjects were required to sort things into two categories. People who reported that they worry 50% of the time or more showed a significant disruption in their ability to sort objects as the difficulty of the sorting task increased.

In a follow up study, researchers found they were able to show that demonstrated that the disruption was a result of increased levels of negative thoughts. When the brain is faced with complex tasks, negative thinking hurts your ability to process information and think clearly.

If the researchers are correct, thinking negatively about your problems not only doesn’t help solve anything, it actually makes it harder for you to think of a helpful solution. You can read more about how thinking positively affects your brain health here.

If you have a tendency to over-react to stress, it could be due to changes in your brain brought on by negative thinking. Negative experiences are stored in the brain by the amygdala. The amygdala is also responsible for the brain’s fight or flight response. The prefrontal cortex regulates our response to stressors.

Someone who is faced with a stressful situation like being in a traffic jam normally assesses the level of threat to their safety and concludes that the threat is less than the annoyance factor and talks themselves through relaxing until it is over.

In contrast, someone who has been previously exposed to stress that was life-threatening and is suffering from PTSD might see the traffic jam as a threat to their safety and respond as if they are under attack. They lack the ability to distinguish between the true threat and the perceived stress and over-react.

How The Thalamus Perceives Stress

The thalamus is responsible to sending sensory and motor signals to the rest of the body but it does not understand that negative thoughts aren’t the same as real danger. When you think negative thoughts, the thalamus assumes that it needs to prepare the body to flee. As a result, our bodies experience real stress symptoms of rapid heartbeat, elevated blood pressure, and a state of heightened arousal.

Imagine just sitting quietly and suddenly having the physical symptoms of fear. You can sense your heart rate increase, your breathing increases, you perspire, and your blood pressure goes up. You start looking for the cause of the symptoms, but when there is no rational explanation for the fear response it is the thalamus causing you to have a panic attack.

Negative thoughts affect our brain by triggering this same stress response. Chronic stress affects the body physically and can have negative effects on our health and well-being.

Stress from negative thinking creates changes in the brain that may affect your likelihood of mental disorders such as anxiety, depression, ADHD, schizophrenia and mood disorders.

People who have Post Traumatic Stress Disorder (PTSD) have been shown to have abnormalities in their brains. The amount of grey matter versus white matter. The difference is that grey matter is where the information is processed by neurons whereas white matter is a fibrous network that connects the neurons. Chronic stress produces more white matter connections but fewer neurons. 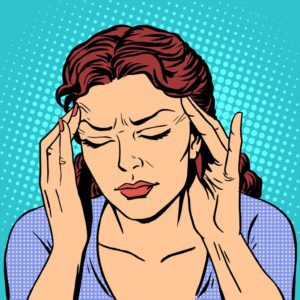 The balance of grey matter and white matter in the brain is important for the timing of communication in the brain. It is believed that the disruption in connections affects both your mood and your memories of the associations with that mood.

The problem is that our brains are good at learning from bad experiences but bad at learning from good experiences. According to Dr. Rick Hanson, creator of The Taking in The Good Course, a brain training program to use your mind to improve your happiness, says that people who completed a program of training themselves to replace negative thoughts with positive ones “experienced significantly less anxiety and depression, and significantly greater self-control, savoring, compassion, love, contentment, joy, gratitude, self-esteem, self-compassion, satisfaction with life, and overall happiness.”

10 Quadriceps Exercises That Build Muscle Fast (Without Using the Gym)

Your quadriceps are one of the most difficult muscles to build at home, but you can do it. You can do strength train...

Water Intoxication: Causes, Signs, and How to Avoid It

When it comes to water, how much is too much? You know that you need lots of H20 to be healthy and keep your body fu...