The lunar eclipse that is coming up can have some interesting effects on your life; here’s what you need to know about how the dark of the Moon will affect you. An eclipse is when the Moon is in the shadow of the Earth with the Sun on the other side.

What You Need To Know About The Lunar Eclipse August 18th

When the Earth is in the shadow of the Moon, it is a rare occurrence and it is significant for our lives in several ways. A lunar eclipse occurs when the moon is full and we would usually be able to see the whole bright surface of the moon, but due to the shadow of the Earth across its face, it is partially or fully hidden.

From skyandtelescope.com ‘Three types of lunar eclipse are possible (total, partial, and penumbral) depending on how deeply the full Moon plunges into or near the umbra, our planet’s dark, central shadow.’ In the case of the lunar eclipse on August 18th, the moon is coming extremely close to the Earth’s shadow and just barely touching the outer edge of it. This will be a penumbral eclipse, because the outer edge of the Earth’s shadow is called the penumbra.

Why a lunar eclipse is significant for our lives

In 2010, Mitch Battros of the website earthchangesmedia.com predicted that earthquakes would occur within two weeks prior and/or two weeks after a lunar eclipse. He was correct for the last six full lunar eclipses. The effects of a lunar eclipse can range all over the surface of the Earth.

As beings mostly made of water, our bodies feel the pull of the full moon like the tidal effect of rising toward the moon. Polish researchers found that the full moon has measurable effects on female menstruation and fertility, on hospitalizations, traffic accidents, suicides, and crime. There are also similar effects seen in animals.

You won’t be able to see this lunar eclipse, but you’ll feel it

Another important thing to note about the lunar eclipse on August 18, 2016 is that the Earth, Moon and Sun will all be in very close alignment to each other, almost forming a neat row in the universe.

Mitch Battros also says that lunar eclipses are related to magnetic changes and extreme weather events on Earth. The changes in electromagnetic fields can make electronic devices act strangely and are detectable by animals and possibly some humans. The shadow of the Earth on the surface of the moon also causes a decrease in reflected solar light for the Earth.

The lunar eclipse in Aquarius will have you feeling free from the bonds and judgment of society. You may have cared in the past for what others thought of your choices, but now you realize that the most important opinion is your own, and you are able to feel more like yourself than you have in a long time.

Watch out for your short temper at this time as well, because the planet Uranus in its position relative to the Sun on August 18th may make you feel more touchy than usual. The Moon’s position relative to Jupiter means that you need to know that you may feel the need for maternal protection. If you can’t get this from your actual mother, you may seek out a motherly figure to substitute for the nurturing that you need right now.

Related article: Who Is Your Perfect Partner Based On Your Zodiac Sign?

Astrologers say that the themes of religion and spirituality are also important now. Jupiter, the Moon, and Uranus all form a triangle in the heavens, and this is called a Yod. This Yod is pointing at God so it is called the God Finger. Darkstarastrology.com says ‘Yods are like a thorn in one’s side that constantly spurs you towards your goal, often whether you like it or not! And this Yod is entwined with the Lunar eclipse. Yods are sometimes called ‘The Finger Of God’, because life feels fated or destined. At the same time there is a yearning for perfection signified by the planet that it is pointing at. This one is God pointing at’. well God.’ 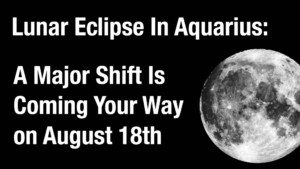