As of March 2019, 15 states plus the District of Columbia have maintained laws to keep marijuana illegal.  The rest have legalized marijuana for mostly medical use, but some states allow recreational use.  Marijuana has several “claims to fame” for its medical use. This includes use as pain treatment, for seizures, and for nausea related to chemotherapy and radiation.  Many of its other reported medical uses are still being studied.

One use that medical professionals and scientists are still studying is how marijuana can prevent liver damage from excessive alcohol use, otherwise known as alcoholic hepatitis.

What is Alcoholic Hepatitis?

Alcoholic hepatitis is a liver infection primarily caused by repeated heavy use of alcohol.  It creates a buildup of fat in the liver cells which then leads to inflammation and scarring of the liver.  This scarring is called cirrhosis.  The results can be fatal and can lead to needing a liver transplant, which requires one to abstain from alcohol entirely.

Our liver is designed to convert food and drink into nutrients that our body can then use.  As a part of this process, the liver filters poisons and other harmful substances from the blood.  When we consume too much alcohol at one time, we create a strain on the liver.  If we consume a lot of alcohol on a regular or daily basis, it is too much for our liver to handle.  Alcohol can damage and destroy liver cells, weakening the liver and causing damage to the organ.

Our liver can only filter one alcoholic drink per hour.  More drinks consumed within that time only increases the amount of time it takes for the liver to filter it.  The excess of alcohol then circulates into the bloodstream.  That process is responsible for the effects we feel when we are drunk or intoxicated.  The word “intoxicated” literally means we have toxins in our body which are creating effects on our nervous system, heart, and brain.

The symptoms of liver disease are:

The good news is that liver damage doesn’t have to be fatal or even require a liver transplant. The liver can repair itself if you stop drinking before the point of cirrhosis.

A study was published on January 17, 2018, by several scientists; they analyzed the 2014 Healthcare Cost and Utilization Project-Nationwide inpatient small discharge record of patients 18 years and older.  These patients had a past or current background of abusive alcohol use. They studied four different stages of progressive liver disease in conjunction with 1) non-cannabis users, which made up about 90.3% of the study population; 2) non-dependent cannabis users, which comprised 8.26% of the populace; and 3) dependent cannabis users, making up 1.36% of the study.

Dependence indicates a state of physical dependence on a substance; subjects demonstrate tolerance toward the use of the substance and withdrawal symptoms upon not using it regularly.  Marijuana is not viewed as an addictive substance, but a dependent substance.

Interestingly enough, a similar study was performed for non-alcoholic fatty liver disease and it was determined that a strong relationship exists between cannabis use and reduction of liver disease.  Results showed that the prevalence of NAFLD was 15% lower in non-dependent users and 52% lower in dependent users.

Another study published back in 2005 states that endocannabinoids in cannabis positively affect the liver.  Endocannabinoids are compounds that bind to the same receptors as tetrahydrocannabinol (THC), which is the active ingredient in hashish and marijuana. These receptors are the same as the ones in our brain and peripheral tissues, including our liver.   The study concludes with this: “Endocannabinoids appear to be involved in several aspects of acute and chronic liver disease, including vascular changes, modulation of the inflammatory process and neurological function.” 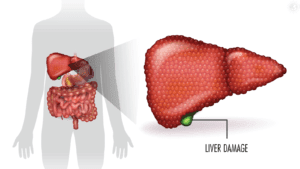 A later study published in Jan 2011 essentially states that there are two different types of receptors: 1) CB1, recognized as the most common receptor in the brain, as well as in peripheral tissue, including various cell types of the liver, albeit at a lower level; and 2) CB2 receptors, expressed primarily in the immune and hematopoietic cells as well as in the liver cells.  The study concludes that CB1 activity contributes to the abnormalities and fibrosis in liver cirrhosis.  Therefore, if we activate CB1 antagonist, then we can slow or delay the process of liver disease.

The concern of using cannabis as that antagonist is the neuropsychiatric side effects which can limit the therapeutic effects on the brain.  Yet, there have been more discoveries of non-psychoactive CB2 agonists which may offer benefits to the liver, including tissue repair. Essentially, since cannabis has the same receptor properties as CB1 receptors, its use can help the body combat liver disease.

Thus far, all studies emphasize the importance of more research to further explore the role cannabis use could play in the treatment of liver disease. Also, further research may help to determine how it creates this decrease in progression.

Advice to Use Marijuana with Caution

While the studies above show promise for liver disease, doctors advise caution in the use of marijuana.

Norah Terrault, MPH, MD, the director of the Viral Hepatitis Center at the University of California in San Francisco, spoke about marijuana use while at the 2018 American Association for the Study of Liver Diseases in November of 2018.

She states that due to the recent legalization of medical and recreational use of marijuana, she has more and more patients who inquire about its use in their treatment.  She warns that there are about 60 different cannabis products from THC, CBD, and others.