Magnesium is one of the most vital nutrients for us human beings.

Despite this fact, up to 70 percent of us don’t get enough of it. This lack is problematic, as magnesium interacts in over 300 biochemical reactions in the body. Moreover, many of those occur in vital organs, such as the brain.

In this article, we’re going to focus on the role of magnesium in relieving anxiety, the number one mental health issue of our time. Anxiety disorders across over 40 million Americans and countless others across the globe. Despite its prevalence, a small minority of people seek treatment.

Let’s start by reading an overview of magnesium.

Magnesium in the Body

Magnesium is one of the five major minerals in the body, along with calcium, phosphorus, potassium, and sodium. Fortunately, we find this essential mineral in many of our foods, dietary supplements, and even in some medications.

This essential mineral interacts with other 300 enzyme systems that regulate biochemical reactions in the body. Many of these are crucial bodily functions, including blood sugar and blood pressure regulation, muscle and nerve function, and protein synthesis.

Our bodies also require magnesium for food-to-energy conversion and energy production. ‘Mg’ contributes to the development of bone and in DNA and RNA construction. Magnesium also allows the transport of calcium and potassium across cell membranes, which is critical for muscle contraction, nerve impulse conduction, and normalized heart rate.

Most magnesium stores in the bones, and it serves as a sort-of intermediary for calcium and potassium interaction, a process known as ion regulation. The heart is one place where this interaction occurs. As such, it is common for those who are deficient in magnesium to experience heart-related trouble, including arrhythmia, muscle cramps, and even sudden death due to heart abnormalities or defects.

The vast majority of research regarding magnesium discusses its effect on the body. However, the mineral impacts the brain, as well. In fact, scientific evidence demonstrates that magnesium intake is essential for proper brain function. 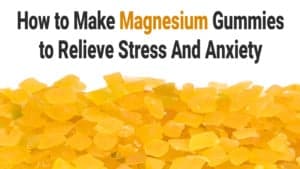 “Some would call this [magnesium] the first chill pill because it’s…eased anxiety for centuries. It stabilizes the mood and promotes…calm and well-being.” ~Edison de Mello, MD, Ph.D.

Magnesium actively enters the brain through a process of cellular energy blood transport (ATP). Once in the brain, magnesium gets to work in regulating the excitatory neurotransmitter glutamate, which in turn, regulates calcium entry into the brain’s synapses.

Where does magnesium come in? Well, it turns out that that magnesium is an agonist of (“promotes”) GABA activity. Per a 2017 study, “these mechanisms of action … suggest [magnesium’s anti-anxiety] activity, which has been confirmed in preclinical [models].” Evidence suggests that magnesium also regulates the neurotransmitter serotonin.

The mineral also suppressed anxiety by reducing the brain’s concentration of stress hormones such as cortisol. The body produces cortisol when we’re feeling stressed. And magnesium restricts the release of cortisol by acting as a sort-of filter at the brain-body barrier.

Magnesium is also a natural muscle relaxant, reducing the tension that so often surfaces with and exacerbates anxiety symptoms. Tight muscles trigger our fight-or-flight response, known as the ‘acute stress response’ or hyperarousal.

Moreover, an influx of calcium and glutamate into brain cells links to both neuronal degeneration and cell death. Magnesium also acts to relax the smooth muscles with the blood vessels, thereby increasing cerebral blood flow.

Magnesium may also reduce anxiety lowering inflammation. Research shows that low magnesium levels may be tied to higher inflammation counts in the body. This is because cytokines, chemical messengers that initiate the immune response, may contribute to mental health disorders such as anxiety and depression. Astoundingly, elevated inflammation even connects to suicidal ideation in some individuals.

The Studies on Magnesium

Not only are there multiple studies demonstrating the anxiolytic (“anti-anxiety”) properties, we found a few anecdotal accounts on the interwebs as well.

In a piece called “Magnesium and the Brain: The Original Chill Pill,” psychiatrist Emily Deans, M.D., discusses her and her colleagues’ experiences with patients who were instructed to take magnesium. Among the cases cited:

A 23-year-old female with a traumatic brain injury (TBI).

Following the injury, the patient developed depressive symptoms from a combination of factors, including stressful work environment, bad diet, and poor academic performance. After just one week of magnesium treatment, the patient’s depression resided, and both her IQ and short-term memory improved.

Upon discovering that she was pregnant with her fourth child, the patient took 200 mg before each meal. She reported no adverse effects throughout the pregnancy and after that.

A 40-year-old male with a history of anxiety, depression, and substance abuse.

After taking just 125 mg of magnesium taurinate four times a day, the man reported no cravings for alcohol, drugs, or tobacco. He also ate healthier and lost excess weight.

A 59-year-old male with a history of manic-depression, anxiety, and insomnia.

After prescription drugs like lithium and antidepressants failed to provide any benefit, The patient took 300 mg of magnesium glycinate with each meal. The participant’s insomnia subsequently disappeared, and he reported a reduction in his anxiety and depressive symptoms.