You’ve tried Atkins. And then you tried Weight Watchers. You’ve tried sugar-free, fat-free, sodium-free and gluten-free. What else is left when you’re trying to shed those stubborn pounds? The good news is that anyone can lose weight without gym, with the right mindset. You don’t have to rely on trendy diets and exhausting exercises to get the body that you’ve always wanted. In fact, you can lose weight without gym equipment at all! You just need a positive attitude… and a few industry secrets.

Did you know that you can lose weight by eating more at the breakfast table? It might seem counterproductive, but studies have shown that people who eat breakfast at least four times a week have lower BMIs than people who skip the morning bagels. It has to do with kick-starting the metabolism and staving off hunger pains before they begin. People who eat a satisfying meal in the AM won’t be tempted to overindulge in the PM.

2. Brush Your Teeth Instead

Late-night snackers, this tip is for you! Whenever you feel like hitting the refrigerator in the middle of the night, grab your toothbrush instead. The fresh, satisfying tingle of a minty mouth will discourage you from messing it up with food, and the physical act of brushing can also distract you from your cravings. Many binges start with just one moment of impulsiveness, and getting past that will also get you past the urge to binge.

Unless you’re living in a Charles Dickens novel where your gruel is going to be taken away from you if you don’t scarf it down right away, there’s no benefit to eating quickly. Research has made it clear that fast eaters are more likely to be obese than people who take their time at the dinner table. This means that it can really help your weight loss goals to slow down, chew your food thoroughly and appreciate what’s on your plate!

If you want to lose weight without gym time, this is the way to do it. You can cut down your caloric intake by as much as 20-30 percent if you’re willing to eat just a little bit less at every meal. For example, instead of cooking three chicken tenders for dinner, limit yourself to two. Instead of throwing back a six-ounce bag of peanuts, save three ounces for later. You won’t have to deprive yourself of whatever you want to eat, but you won’t eat too much of it, either.

Throwing out your chocolate won’t make you crave it any less. As a matter of fact, it might make you crave it even more! We always want what we can’t have, especially when it looks so decadent in those TV commercials filled with beautiful women and flowing cascades of cocoa. Instead of forcing yourself into a painful chocoholic detox, try making small, sustainable lifestyle changes that gradually reduce your reliance on Hershey and Cadbury.

There’s a reason why athletes and bodybuilders are all about the protein. Not only is it good for you on a nutritional level, but it also works as a natural appetite suppressant. It will make you feel fuller for longer periods of time, so you’ll consume less food without even trying. It can be very helpful if you’re trying to lose weight without gym memberships and celebrity diets. The next time that you’re at the grocery store, stock up on eggs, beans, lentils and poultry.

Think about a regular-sized scoop of ice cream. If it’s perched on top of a tiny cone, it’s going to look enormous. If it’s a sad little lump at the bottom of a bowl, however, you’ll want to add more scoops to get your money’s worth. Using smaller dishes can trick your brain into thinking that you’re consuming more food than you are, so consider updating your tableware if you’re serious in your desire to lose weight fast. 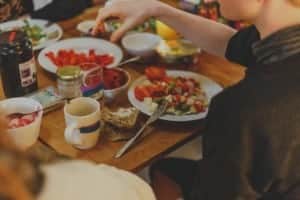 It’s actually a myth that you need eight glasses a day, but drinking more water is always good for your health. It’s a nice way to lose weight without gym routines or low-carb diets, too. In addition to filling up your stomach, it will stop your body from bloating, hoarding sodium and retaining unnecessary water weight. This isn’t even getting into all of the ways that hydration will make your hair shine and your skin glow!

These are just a few things to keep in mind if you want to lose weight fast. Don’t believe the misconceptions about diet and exercise being the only ways to slim down! It’s entirely possible to lose weight without gym facilities or trendy meal plans. You just have to be willing to work for it.

Good luck! You can do it!