If you’ve never heard of long coat German Shepherds before, you’re in for a treat. Their long, luscious fur comes from a recessive gene that any dog can carry. However, most German puppies have the classic short-hair coat. Long coat German owners should consider themselves lucky since this breed is so rare.

Today, we’ll share one woman’s experience with these beautiful dogs. Chloe’s had German shepherds her whole life but only adopted long-coated dogs after discovering dwarfism in German Shepherds when she got older. So if you’ve been longing for a new dog, these fluffy pooches may steal your heart.

“I’m gonna go back in time because my parents have always had German shepherds. And don’t get me wrong; they were not trained. So, I always promised myself that if I got a German shepherd, I’m gonna put in the time and they’re gonna be well-behaved and trained.”

She stuck to her promise as she trained her two long coat German shepherds, Kaos and Mayhem, quite well. Her two dogs mean the absolute world to her. Kaos is now three-and-a-half, almost four. Mayhem is the little pup, just six months old.

They both came from breeders in South Australia, and Chloe had them flown to Melbourne. She was a bit taken aback by Kaos’ massive size, however. When he and his sister came to Melbourne, Chloe saw the sister first. She couldn’t believe how big she was until she saw Kaos. She jokingly said: “He was huge compared to his sister.”

Mayhem also got flown in from South Australia, along with his two brothers. Chloe loved getting to meet the other owners and hear their experiences with the long coat German shepherds. 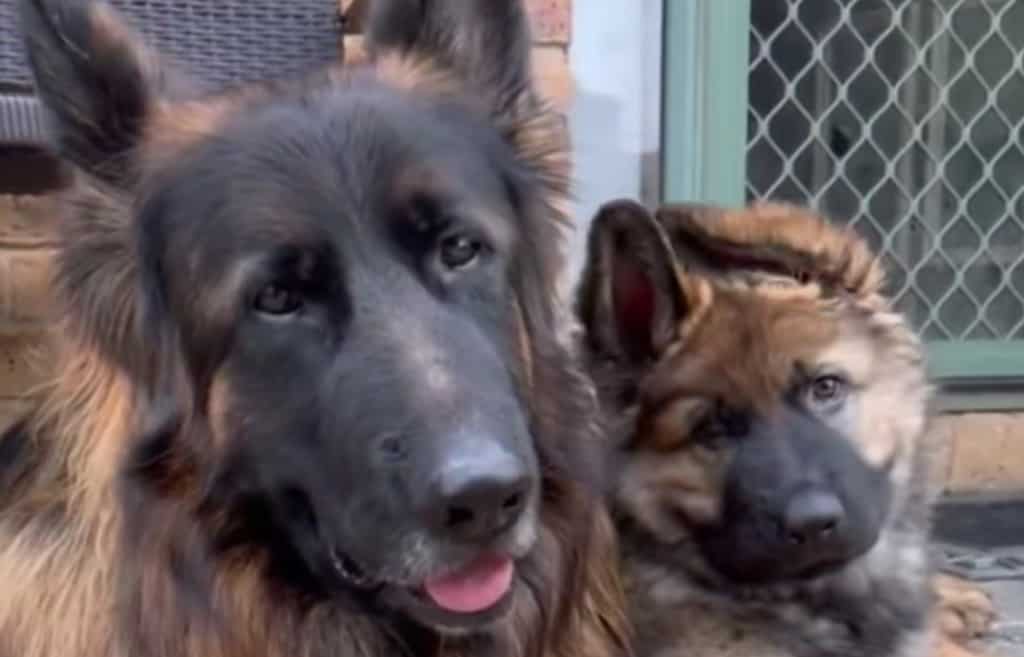 The brothers didn’t always get along, but now they’re best friends now

Before Mayhem came along, Kaos had to overcome many challenges. As a puppy, he had angiodysplasia, which affects the intestines. He had to undergo an operation and now takes joint supplements. Also, he has arthritis. But that challenge doesn’t stop him from living a full life.

“He has the best life possible; he gets spoiled rotten. My best memory is when these two bonded. So when I got Mayhem, Kaos wasn’t a fan,” Chloe recalls. “He didn’t wanna play with him, he didn’t wanna give him any time of the day until I’d worked with them both. I’ve done some training, I got them bonding, and after two weeks, they got along like gas on a fire.”

Now the brothers love to play together and show off their beauty on Instagram. However, behind the scenes, Chloe puts in a lot of work with their training. Since long coat German shepherds are so intelligent, it’s important to nurture that. They need a lot of mental and physical stimulation to thrive.

“I definitely recommend everyone that’s got a dog or a German Shepherd to do lots of training. That’s why the police use German shepherds. It’s because they love to work,” Chloe says. “So with Kaos, I started him at eight weeks old. He was a little champ; he had done really well. And it’s definitely showing off on how well-behaved he is because he’s actually been on TV; he’s been in lots of photoshoots.”

Chloe says that, due to all the training, Kaos remains calm no matter where he goes. He does well with strangers and also loves cuddling with his family at home. Who wouldn’t want cuddles with such a gorgeous fellow like him?!

As an older dog, Kaos now knows how to behave. Since Mayhem is still a pup, however, it’s a different story.

Little mister Mayhem, he has been trouble. But you know what? You work through it, and it does take time. You’ve gotta put in the effort to see the results,” Chloe reiterates. “Please make time for them, please do lots of training with them, because they love learning.”

She says when she gets home from work or errands, she immediately takes them outside. Going on neighborhood walks or playing with the dogs outdoors allows them to put their skills to the test. Chloe also makes them enrichment toys and spoils them rotten because she loves them! Both the long coat German shepherds and Chloe got pretty lucky in life now that they’ve found one another.

It’s not every day you encounter this beautiful breed. There’s just something about a flowing, luscious coat on a dog that makes him stand out. Luckily for Chloe, she’s got two of these gorgeous German shepherds to keep her company.

While the AKC may look down upon long-haired Germans, they’re some of the best companions around. Like all Germans, Kaos and Mayhem have so much love to give and are endlessly loyal. Have you ever seen a long coat German shepherd? Let us know in the comments!