The importance of mental health

The quality of your mental health affects pretty much every aspect of your life, including how you behave, feel, and think. The quality of your mental health determines how well you cope with stress, overcome adversity, and achieve your goals. When you’re energetic and positive, these things come easily; when you’re downtrodden and negative, everything seems much more difficult.

What does it mean to have good mental health? Well, contrary to popular belief, it does not mean feeling happy all (or even most of) the time. Of course, happiness is wonderful, and we should all feel happy now and again – it’s just not the cause or effect of good mental health. Instead, good mental health means feeling and thinking in a positive manner more often than not.

People with a good state of mental health often report the following: 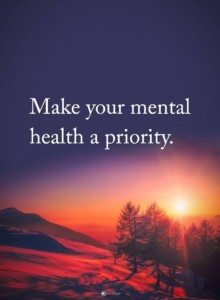 Habits of the mentally healthy

“Out of suffering have emerged the strongest souls; the most massive characters are seared with scars.” – Khalil Gibran

Basic human psychology dictates that your habits –  at least to some degree – affect the state of your mental health. If you eat junk food all the time, drink too much, and forget to exercise, for example, you’re probably going to be in a less-than-ideal healthy mental state. If, on the other hand, you’re proactive about your health and practice the right habits, you’re likely to feel good mentally.

With that said, here are 10 habits that can improve mental health, according to psychology:

If even 30 years ago you were to say that the mind can affect the body, some people – including so-called “experts” – would’ve looked at you as if you were crazy. Well, times are a-changin’. We’ve long established the mind-body connection and have learned some fascinating things.

Exercise increases the number of “feel-good” chemicals in the brain, improves memory, and sharpens thinking skills. It also enhances focus and concentration and works as an excellent outlet for stress.

“Meditation … has long been acknowledged as a tool to master the mind to cope with stress. Science is increasingly validating those claims …” – Mental Health America

While yoga and meditation are technically different practices, the latter is an integral part of the former. In fact, the two methods are very similar – and thus produce many of the same benefits.

Psychology often points to sleep difficulties as a symptom of mental health disorders, particularly anxiety and depression. A study undertaken at the University of Oxford finds that the opposite may be the case. The study’s lead author Daniel Freeman, a professor of clinical psychology at Oxford, says that making a habit of getting quality sleep (the National Sleep Foundation recommends 7-9 hours) may “tackle a wide range of psychological and emotional problems.”

It’s estimated that less than 2 percent of the population can multitask “effectively.” Psychology, however, says that the brain is incapable of doing two things at once unless it’s, say, walking and chewing gum or driving and listening to the radio. (Of course, you don’t have to put much thought into chewing gum.)

The big problem with multitasking is two-fold. First, it depletes the brain’s energy reserves more quickly. Second, it can be very stressful. Both issues run counterproductive to good mental health. Instead, work on creating a habit of single-tasking. Focus on one thing at a time.

There really is nothing mystical about mindfulness. The practice generally involves two things: (1) attention to the present moment at the exclusion of everything else, and (2) the non-judgment of thoughts.

It does take effort, however, to make mindfulness a habit. Still, the benefits to your mental health can be extraordinary.

Mentally-healthy people seem to strike a good balance between work and personal life. The cultivation of such balance (and its positive effect on our psychology) cannot be overstated. Too much or too little focus on one or the other can lead to the development of mental health problems including anxiety, depression, and burnout.

With this in mind, do your best to make a habit of keeping work at work.

Procrastination is one of the most stress-inducing habits there is – and it can wreak havoc on your mental state. If you have something that needs to be done, it’s much less mentally painful to just do it. You’ll discover that taking action immediately reduces stress. It turns out that the thing you were trying your best to avoid actually isn’t so bad, after all!

Relax! This is not to say that your gizmos are bad – far from it! Smartphones and other digital devices bring a wealth of relevant and profitable information to both individuals and businesses.