Some people may assume that successful marriages are blissful solely because those couples don’t fight. The truth is, every couple has their fair share of arguments. It’s the ones who fight the right way that survive and thrive in a lasting and mutually-beneficial relationship. Researchers explain some ways that arguing can actually improve your marriage:

Here Are 6 Ways Arguing Can Improve Your Marriage

“To assume that any couple goes without arguing is just nonsense.” – Seal

1. You control your temper.

You need to control your temper when arguing with your spouse. Heated arguments might lead to flare-ups and hurtful words because, obviously, people can get very emotional when angry. Be aware of when you’re about to lose your temper. At such times, express to your partner that you need some time to cool off. Instead of meeting each other head on and provoking more anger, some couples actually pause and have timeouts in the middle of a tense discussion.

A timeout is an effective behavioral tool for managing anger. In a marriage, partners may actually set a formal agreement that details the parameters of a timeout and use this each time they have a fight. This way, conflicts between couples are better resolved and settled when heads are cooler.

Aside from helping dissipate anger, cooling-off periods also give partners a chance to see the issues better. It’s easier to organize your thoughts or gather insights rationally when you’re not angry.

2. You take turns when stating your arguments.

Good arguments, like good relationships, are about give and take. Couples who fight right are always aware that they must give each other the opportunity to express feelings and opinions that are causing friction.

As it is, conversations are hard to initiate during a fight, but couples who respect each other make it a point not to interrupt when the other person is stating a case. You’re trying to dominate and control the situation when you interrupt your partner during an argument, instead of trying to understand the other side of the situation.

Therapist Casey Caston said that in his marriage, he and his wife prevent each other from interrupting during arguments by using a toy microphone. The one who has the microphone at a given moment has the chance to speak. When that person is done, he or she must hand the mic over for their partner’s turn to speak.

3. You listen to each other.

In line with not interrupting your partner in an argument, good communication skills require sharp listening skills as well. In successful marriages, when one person speaks, the other genuinely listens in order to understand their spouse’s concern.

People who develop good listening skills are said to be more discerning and open to the other side of the argument, according to a study. Active listening works not just in marriage, but in all kinds of relationships.

Listening also allows couples to acknowledge each other’s opinions and feelings, even if they’re not yet on the same page. It makes them understand each other’s style of communication better. Listening creates a positive atmosphere that removes defensiveness. With this out of the way, couples can productively resolve their arguments and issues.

4. You know when to use humor.

Arguments are serious matters but having a sense of humor might help clear tension in this highly charged situation, according to a study in the Society for Personality and Social Psychology. Some types of humor, however, might be more effective than others. Researchers learned that jokes which aren’t made at the expense of someone could help ease the tension better than self-defeating humor.

Successful couples who are in tune with each other’s feelings use humor to comfort and reassure their partner. It’s one way of telling each other that even when they are upset, stressed out, and anxious that everything will still be fine after the negative feelings have disappeared.

Arguments that include criticism, sarcasm, name-calling, eye rolling, and other behaviors that show contempt won’t end up well. Besides the fact that you can never take back these hurtful words and gestures, fighting dirty can be very damaging to a relationship and may have long-term effects. It can lead to discord that breeds resentments and self-esteem issues.

Ultimately, partners who argue fairly understand that they are part of the same team. So, why bring each other down with smack-talk and disrespect?

6. You learn to apologize.

Why is an apology hard for some people? It’s because when a person apologizes, he’s owning up to the fact that he has caused his partner hurt and pain. Some might not accept that they were at fault in the marriage, so they don’t make an effort to apologize.

However, successful couples are not afraid to say sorry to each other. They do this to seek forgiveness, first and foremost. Making an apology also helps couples drop their defenses down and become less argumentative towards each other. 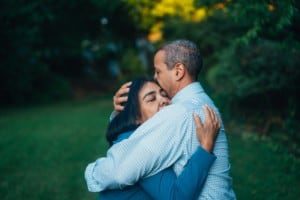 Despite positive thinking, arguments crop up because couples need to work out the problems and issues in their marriage. These fights aren’t supposed to divide couples but strengthen and protect their relationship. Maintaining a long-term relationship entails hard work, but if loving couples know how to properly engage with each other, then even arguments will have lasting positive effects.