Do you like to cuddle? Do you embrace the comfort of snuggling up against your love? Well, there may be some scientific reasoning behind these lovey-dovey feelings.

As it turns out, physical manifestations of touch are vital to psychological well-being. Katherine Harmon, an award-winning writer and journalist for Scientific American, wrote in 2010:

“…researchers have been discovering how emphasizing skin-to-skin contact between baby and parent can be a boon to both, and how consistent emotional engagement with infants can speed their development and recognition of self.”

Harmon notes, tragically, that babies who are deprived of touch and emotional engagement “are at a higher risk for behavioral, emotional, and social problems as they grow up.” These problems, Harmon states, could remain with a person throughout their life.

From Babies to the Bedroom…

Harmon’s research is mentioned for this reason: to demonstrate the incredible physical and psychological influence of human touch. We are biologically hardwired to receive touch and, as Harmon explains, the lack thereof can manifest into serious problems.

Which brings us to cuddling. Cuddling, as we all know, is the act of holding someone close as a way of showing love or affection. It is also one of the most intimately effective forms of touch. (Cuddling is also a common practice among members of the same sex – and the benefits are just as tangible.)

Here are a few of the things that science says happens to your body when you cuddle:

“Although poets and authors have tried to describe love, in the world of neuroscience, researchers have found that the naturally occurring hormone oxytocin and love are intimately related.” ~ Psychology Today

Cuddling stimulates release of the brain chemical oxytocin, one of the brain’s “feel-good” hormones. Some people also refer to oxytocin as the “love hormone,” as it creates strong feelings of relaxation, stability, and trust. Additionally, oxytocin also appears to reduce stress responses, including anxiety. It also positively influences bonding behavior. 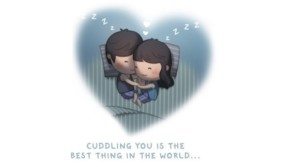 According to Dr. Fran Walfish, a renowned child, couple, and family psychotherapist in Beverly Hills, California, cuddling is a powerful way to bring two people close together:

“The most obvious benefit to cuddling is getting close to your partner in the physical sense. There is also the release of dopamine which is an excitatory hormone that increases sexual desire.”

Cuddling also enhances the bond between parents and babies. Science points to the release of neuropeptides as the reason for this effect.