Bread, carbohydrates, sugar, white flour, and wheat have been under attack in society for the last 5-10 years.  There have been multiple variations of diets which call for a decrease or elimination of at least one of the above ingredients.

Currently, the latest “health” trend related to carbohydrates is the Gluten-Free diet.  Prior to this latest trend, pretty much only people with Celiac disease even knew what gluten was and had to avoid it – a fairly difficult process when the bulk of people didn’t even have to think about it.

Many people with Celiac disease have learned to make their own bread at home.  Why?  For starters, gluten-free bread in the grocery store could rarely be found and secondly, most have a less-than-desired taste and consistency.  Finally, it also very expensive to buy.  Hopefully, since going gluten-free is spreading across America, maybe there will be an increase in tasty gluten-free bread soon.

Back in 2017, a cardiologist by the name of Dr. Steven Gundry introduced a new book titled The Plant Paradox.  In this book was a recipe of a bread named the “Barely Bread.”  It is a yeast-, soy-, and gluten-free bread substitute which is also paleo-friendly.  It is touted as the “no-guilt bread recipe that you can eat as much as you want.”

First of all, let’s go over what celiac disease is and why Dr. Gundry’s bread recipe is so revolutionary.

What is Celiac Disease?

Celiac disease is an inherited autoimmune condition that affects an extremely small percentage of the population. The consumption of gluten from wheat, barley, and rye causes damage to the tiny hairs, or villi, of the small intestine. This damage results in malabsorption of nutrients.

Adult patients may show symptoms such as:

Who is Dr. Steven Gundry?

Dr. Steven Gundry has several great achievements in the field of cardiology, specifically heart transplants. Per his website, his accomplishments and patents include:

Undeniably, these are impressive accomplishments!  While there are fairly well-recognized parallels between cardiology and diet, why would a cardiologist develop a new diet?

In his words, back in 2001, he took on a chronically ill, overweight patient who was viewed by others as someone who couldn’t be helped.  Apparently, this patient later reversed his own heart-threatening symptoms.  These heart conditions were inoperable, according to doctors.  How did this patient do this?  Basically, he combined nutrition with other natural remedies and lifestyle choices.

Dr. Gundry himself at that time was fighting his own weight issues with added high cholesterol and high blood pressure.  He became very interested in this diet and conducted his own research.  This led him to form his foundation, Center for Restorative Medicine, located in Palm Springs, CA.  He has named his study “Holobiotics” and he states on his site:

“The key to strong, sustainable health lives in all of us… in the form of beneficial microbes. These ‘good bacteria’ are in danger of dying out, due to dietary and environmental issues that overload our systems with threatening ‘bad’ microbes. Once you begin taking care of your ‘good’ microbes – or, as I like to call them, ‘your gut buddies’ – you can begin an incredible transformation.”

While he points to microbes as a factor in a healthy diet, in a separate article written in Health Organic Portal, he also mentions how lectins can act as toxins, or, in his words, “create a kind of warfare on your body.”  They can create inflammation which may lead to weight gain.  Lectins are a plant-based protein found in fruit, vegetables, and forms of gluten and wheat.

The rest of the basis of his diet and recipes can be found in his publications, which can be ordered on his website.

Back to the Barely Bread

So what is the wonderful recipe for this “Barely Bread” that you can reportedly eat all you want of?  Here it is in all of its lectin-free and gluten-free glory!

In a bowl, mix the dry ingredients, and add the flax seeds. Over medium heat, melt the butter, leave it to cool for 5 minutes, and add the wet ingredients to the dry ones. Mix with a spatula until you get a dough-like mixture.

Then, transfer it onto a baking pan covered with baking paper. Sprinkle with flaxseed and bake at 175 degrees for 25 minutes. Use a toothpick to check if it is ready.  Leave the bread to cool down and wrap it in a towel. To preserve the freshness, it would be best to keep it in a Ziploc bag.

While trying the above recipe certainly isn’t harmful, going gluten-free when you haven’t tested positive for Celiac Disease, non-celiac wheat sensitivity, wheat sensitivity, or gluten intolerance should be done with full information.

There are many vitamins and minerals that we gain from enriched bread such as:

Additionally, if buying store-bought gluten-free products, there may be increased sugar and fats.  Make sure you are reading the labels for additives as well as the nutrition facts.  You may want to consider supplementing your diet with added vegetables, fruits, or a multivitamin to make up for the loss of nutrients.  Gluten-free flours are not usually enriched like wheat flour is.  However, there are some nutritious substitutes for grains: 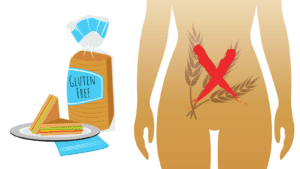 An additional caution is to make sure that when you purchase these above grains, you pay attention to the label of “Certified Gluten Free.”  For example, cornmeal is an easily available grain.  Oftentimes, though, the companies may package the cornmeal using the same machines that they use to package wheat flour.  If you truly are allergic or have Celiac Disease or gluten intolerance, you are still getting gluten through cross contaminations.  For those of you who do not have any gluten issues and choose this diet as a preference, it probably won’t matter to you.

Irritable Bowel Disorder plagues many people.  Whether your symptoms include chronic constipation, diarrhea, or both, it is not only uncomfortable, but brings with it an assortment of gaseous and painful symptoms such as bloating.

Interestingly, studies were performed looking into implementing a gluten-free diet as a method of addressing these symptoms.  It has been shown that people with IBS who adopted a gluten-free diet saw a reduction in their symptoms, even though they did not test positive for a gluten allergy.  It should be noted that the same subjects were not tested for a wheat allergy.

The benefit of choosing to eat gluten-free even if you don’t have illnesses is debatable, but thus far, the only drawbacks are the price of gluten-free products, potentially more sugar and fat in the products, and the missing enrichment of vitamins and minerals.  However, even if you don’t have Celiac disease or a gluten allergy, you can enjoy as much of the barely bread as you want!