We live in an era where we can make friends quite easily online. It just takes a little searching to find groups where we might fit in, and we can choose from thousands of people to chat with. However, online friends can never take the place of real life friendship.

Studies show that even if people have thousands of Facebook friends, they usually only have one or two close friends in real life. We need face-to-face interaction with people in order to survive, and unfortunately, rates of loneliness are increasing across the globe.

In fact, according to study published in the American Sociological Review, most people in the U.S. have only one close friend. 25% have no friends at all. This is dangerous to our health; loneliness has been associated with the same risks as smoking 15 cigarettes per day.

If you have even one good friend in your life, however, you should consider yourself lucky. Not everyone has someone they can count on, unfortunately. On the other side of things, if you ever notice someone who seems lonely, don’t be afraid to strike up a conversation. After all, a friendship begins as two people who are strangers, anyway.

With that said, we will go over some signs that your friendship will last forever.

“There is nothing on this earth more to be prized than true friendship.” – Thomas Aquinas

Here are 10 signs of a friendship that will last forever:

Both of you can let your guards down and be your complete selves, and it feels so good! True friendship means taking off the mask you constantly wear for society and showing what’s underneath. A real friend never judges you for your opinions, perceptions, thoughts, or weird jokes no one else laughs at.

You don’t have to put on a front or try to be something you’re not. A friendship that will last forever offers a breath of fresh air, because you can leave the world behind and just enjoy each other’s company.

There’s truly nothing better than a friend who just gets and accepts you.

2 – They don’t leave when times get hard. 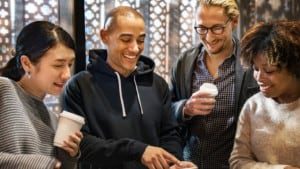 This one probably one of the most distinguishing factors between a fake and real friend. In the darkest times, true friendship lights the way. A fair-weather friend leaves you in the dust when the slightest problem arises, but a tried and true friend stands by you. Real friends offer to help you in any way they can because they don’t want you to suffer.

True friends encourage and support you no matter what. If you have a friend like this, hold on to them and cherish them.

3 – A true friendship that lasts forever puts jealousy aside.

Fake friends get jealous when you’ve achieved something or found a relationship that makes you happy. However, a true friendship celebrates your wins with you. It doesn’t need to compete or stomp on someone’s happiness to survive. If you have a friend like this in your life, you have truly struck gold.

Many people have friends who would rather see them unhappy and struggling than succeeding. Notice who stays with you when you get a promotion or marry the love of your life. Those are the people worth keeping.

4 – You can share your deepest, darkest secrets with them.

A true friendship gets deep down to the core of who you are. It doesn’t just swim on the surface and discuss fashion, gossip, and other superficial ideas. You can feel comfortable sharing your childhood trauma, best memories, dreams, fears, doubts, pain, and insecurities. You don’t have to feel ashamed or embarrassed about certain aspects of yourself.

True friendship that lasts forever is freedom, because you can finally share what makes you, you. You don’t have to fear judgement or ridicule from a true friend because they love you for you.

With other friends, you might feel like you have to chase them or constantly reach out to keep them in your life. However, with a true friend, they put in the effort also. You don’t always have to be the one calling or texting in order to keep their friendship.

They might not talk to you every day, but when they do reach out, they ask about your life. They care about you and want to catch up as much as possible because you’re worth the effort to them.

Plenty of people make excuses as to why they can’t hang out. However, it’s about priorities. If someone’s important to you, you will take the time to see them.

6 – They make you forget about the real world for a while.

After seeing them, you feel more excited and inspired about life. Authentic friendships offer a perfect exchange of energy between two people. There are plenty of energy vampires out there who feed off a happy person’s aura. However, a true friendship is an even amount of give and take.

Plus, you can laugh and put your worries aside for a while. Of course, there will be days when you both need to vent about things, but for the most part, you have a great time in their company.

7 – They tell you what you need to hear, not just what you want to hear.

They don’t just sugarcoat things to avoid hurting your feelings. They lay everything on the table and let you decide what to do with that information. People like this might seem blunt and rude, but they do have your best interest at heart. They would rather cut to the chase than beat around the bush, because you won’t grow from niceties. People make changes because someone points out a behavior or habit that is hindering rather than helping them.

8 – They forgive you when you make a mistake.

Maybe you said something hurtful when you were upset after a long day at work. Instead of blowing it out of proportion, however, they accept your apology and don’t hold a grudge about it. Friends have fights sometimes; that’s just a part of life. A true friendship has a solid foundation, though, and doesn’t fall apart after one argument or disagreement.

9 – A true friend says what they need to say to your face, not behind your back.

Real friends never spread gossip about you behind your back. If they have something to say to you, they confront you directly, even if it’s uncomfortable. Many people hate confrontation and would rather run to someone else than the person they need to address. This is cowardly and childish.

A true friendship has respect and courtesy to talk things out between one another. A real friend would never dream of hurting you by spreading rumors and tarnishing your reputation. They would rather smooth things over with you than let everything escalate out of control.