Foods to Avoid When You Are Pregnant

1. Fish that is high in mercury

Mercury is highly toxic and is not safe at any level during pregnancy. It can cause harm to your baby’s nervous system, immune system, their kidneys, or interfere with their development both before and after birth. Fish that have high levels of mercury are found in polluted seas and tend to be the large fish such as:

2. Sushi or other uncooked fish

Raw fish can cause your baby to have infections such as bacterial or parasitic, norovirus, salmonella, or listeria. Sometimes these infections will cause you (the mother) to become dehydrated and very week, but they can also infect your unborn baby causing serious, sometimes fatal, health issues. When you are pregnant, you are nearly 20 times more susceptible to these infections.

Some of the complications that can affect your unborn baby include:

3. Any meat that is under-cooked

Raw or under-cooked meat can cause bacterial or parasitic infections such as E. coli, listeria, and salmonella. When your baby is exposed to these infections, serious complications can occur that can ultimately lead to death. Some other complications that can potentially occur include:

While caffeine is thought to be safe in small amounts, you likely need to cut way back on your caffeine consumption when you become pregnant. Caffeine enters the placenta easily, quickly reaching your unborn baby. This is because an unborn baby cannot burn caffeine and it can cause low birth weight

Caffeine can be found in unlikely sources such as:

5. Produce that has not been washed

Produce is a common source of bacteria and infection such as E. coli, toxoplasma, Salmonella, and Listeria. The food becomes contaminated by way of the soil and through handling.

Toxoplasmosis is especially dangerous because it can cause eye or brain damage while the baby is in your womb. Sometimes toxoplasmosis is contracted with no symptoms at the onset or at birth, but it can cause blindness or mental disabilities later on in life.

Simply washing your fruits and vegetables before you chop them up and eat them can prevent these infections and bacteria from making you or your unborn baby sick.

Usually, when you buy milk, cheese, or juice from a grocery store it is pasteurized, but occasionally, you will come across unpasteurized products. These products can cause infections such as listeria, salmonella, and E. coli.

Consuming pasteurized products prevents these bacteria from affecting you and your unborn baby by killing the bacteria. An added bonus is that during the process none of the nutritional value is lost, either.

Alcohol consumption during pregnancy can lead to miscarriage, stillbirth, and serious birth defects. Many times, when a mom has consumed alcohol during her pregnancy, her baby will be born with fetal alcohol syndrome which causes deformities, heart defects, and mental retardation.

During pregnancy, you and your unborn baby need large amounts of protein, folate, and iron. When you are consuming processed snack foods such as chips, cookies, and microwaveable dishes prevent you from consuming all the essential nutrients you need.

Processed snack foods are high in calories and sugar, and low in any of the nutrients that you should be aiming for. It can cause an unhealthy amount of weight gain and can cause pregnancy complications such as gestational diabetes.

During the processing and storage of hotdogs a few different types of bacteria can infect you or your unborn baby. Listeria is a major concern when it comes to hot dogs, and the hot dogs should always be cooked thoroughly before consumption. The fluid that is found in a pack of hot dogs is even more of a concern, as that is the most likely place to find listeria.

For the same reason as avoiding hotdogs, lunch meat and other deli meat should be avoided or limited when you are pregnant. If you do occasionally give in to the craving and consume lunch meat, it should be heated until it is steaming hot to kill any possible bacteria.

Raw or under-cooked eggs are a common cause of Salmonella. This infection can lead to you (the mother) experiencing fever, nausea, vomiting, cramps, diarrhea, and other flu-like symptoms. On very rare occasions, salmonella from raw eggs can lead to uterus cramps that cause premature labor or stillbirth.

It may be difficult to determine what constitutes raw egg, because raw egg can be found in a variety of forms including:

Soft cheeses such as brie, Camembert, Roquefort, feta, Gorgonzola, queso blanco, and queso fresco should be avoided during pregnancy unless their packaging clearly states it has been pasteurized. Consuming soft cheese that is unpasteurized can lead to listeria.

13. Anything from a buffet

Unless the potato skins have been thoroughly scrubbed and cleaned, you should avoid them during pregnancy. The dirt that clings to the skins can harbor bacteria and infection causing parasites. If you aren’t certain that the skins were scrubbed, you may just want to avoid them altogether to prevent yourself and your unborn baby from becoming ill.

You may enjoy herbal supplements for cooking or for healing, but experts are unsure if they are safe for pregnancy. In order to ensure that you and your unborn baby are safe as possible, it is best to just avoid these supplements altogether.

Shellfish comes with a risk of infection to you and your unborn baby. Algae contains large amounts of bacteria and, since shellfish regularly consume algae, shellfish are full of the bacteria when they die. While you may think that cooking kills all of the harmful bacteria, it actually doesn’t kill it all.

When you are trying to avoid shellfish, it is wise to avoid the following:

Raw sprouts contain bacteria that is extremely difficult to wash away the way you can wash most fruits and vegetables. This bacteria can cause illnesses and other complications for you during pregnancy, and it may even harm your baby, as well. The raw sprouts that should be avoided include:

18. Foods that are high in calories

When you consume foods or beverages that are high in calories, you are limiting the nutrients you can intake for the rest of the day. You don’t get a free pass to eat whatever you want without repercussion during pregnancy (although that would be wonderful), so you still have to be careful.

There are certain essential nutrients during pregnancy, and foods that are high in calories don’t tend to have large amounts of those beneficial nutrients. You should instead opt for foods with lower calorie content and higher nutrient content.

Homemade dessert mixes almost always have raw egg in them. This opens the door to salmonella and other infections that you should be avoided to ensure your safety and the safety of your unborn baby.

If you can’t avoid eating the raw dough, look for a store-bought option that does not contain raw egg. It is generally easy to find, so you shouldn’t have to search too hard.

Also known as pates, meat spreads are susceptible to bacteria such as listeria. Even keeping your refrigerator colder than normal can’t prevent all of the bacteria from growing, so you should really just avoid meat spreads until after your pregnancy.

Homemade Caesar dressing is a common culprit of raw eggs which, as discussed previously, can cause salmonella and all of the issues that may come along with the infection. It is unsafe to you and potentially dangerous to your unborn baby. The safer option is to buy your dressing in a store, as the raw egg used in those recipes tends to be pasteurized. 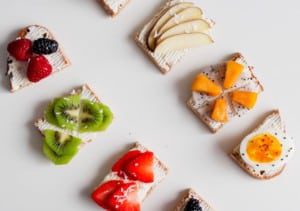 Some desserts such as tiramisu, mousse, and meringue call for raw eggs. If this is the case with your favorite dessert, it may be best to just avoid it until your pregnancy is over. You could also opt for a store-bought version that uses pasteurized eggs, or you can normally buy pasteurized eggs to safely make your own.