According to the Anxiety and Depression Association of America, around 40 million Americans suffer from anxiety in a given year. The article goes on to say that treatments exist to help those suffering, yet only about 37% of those with anxiety seek counseling. People with anxiety go to the doctor three to five times more often than those without the disorder and have a six-fold chance of being hospitalized for a psychiatric disorder.

Anxiety stems from a multitude of factors such as genetics, environment, brain chemistry, personality, and lifestyle. However, new research shows that the foods we eat might increase our anxiety as well. This make sense because the gut and brain are intrinsically linked; although research is still in its early stages, scientists have found that about 90% of the body’s serotonin is produced in the gut!

Low levels of serotonin in the body have been linked to disorders such as anxiety, depression, schizophrenia, and even autism. Researchers have also found that poor gut bacteria can lead to an increased fear response which exacerbates anxiety. Your gut helps to create neurotransmitters that can alter your mood, so flooding your body with healthy bacteria will allow for the optimal environment in your gut.

With all the processed foods people eat on a daily basis, it shouldn’t come as a surprise that anxiety, depression, and other mental health disorders have skyrocketed. In order to make your body function properly, you must feed it the right fuel and stay away from things that cause it to malfunction. In this article, we’ll go over some common foods that cause anxiety so that you can start feeling calmer and more clear-headed.

Here are 5 of the most common foods that cause anxiety:

Although many people with anxiety turn to alcohol to help calm their nerves, it can lead to serious damage over time if a person becomes dependent on it. Not only can it cause liver and brain damage, but it can disrupt the balance of bacteria in your gut. As we stated above, this bad bacteria can lead to increased feelings of anxiety due to changes in neurotransmitters.

Many people with social anxiety use alcohol to get through a night out on the town or dinner with the in-laws, but this can easily turn into an unhealthy coping mechanism. If a person who drinks heavily suddenly gives up alcohol, the withdrawal symptoms can lead to increased anxiety. Also, once the sedating effects of the alcohol wear off, insulin levels in the body increase, which can cause restlessness, anxiety, and irritability.

If you find that you need alcohol to relax, try deep breathing exercises or a vigorous workout instead. These methods might take more effort than downing drinks to feel better, but in the long run, your body and brain will be much healthier.

Most people know that caffeine is a stimulant; while it can help you get through the work or school day, it also increases anxiety.

Caffeine can mimic anxiety in those sensitive to it. For example, after two or three cups, you might notice your heart racing, hands sweating, and mind running a mile a minute. Because caffeine stimulates the nervous system, this spells bad news for those with anxiety. It increases the chemicals cortisol and norepinephrine, both of which help you respond to a threat by boosting adrenaline. However, in the modern world, these chemicals can do more harm than good.

If you decide to give up caffeine, make sure to do so slowly so you don’t have nasty withdrawal symptoms such as migraines and fatigue. Also, read labels on foods and drinks; many companies add caffeine to give you an energy boost. Keep in mind that tea, chocolate, and many energy drinks contain caffeine as well. If you’d rather cut down on your caffeine consumption rather than cut it out completely, try drinking coffee every other day or substitute it with tea. Many people report feeling less jittery when they drink tea every morning instead of coffee.

In recent years, studies about the connection between sugar and mental health have been on the rise. Researchers have found that eating excess amounts of sugar can increase the risk of developing anxiety, depression, addiction, and memory problems.

Not to mention, sugar throws off the balance of gut bacteria, which can cause candida overgrowth, bloating, and other digestive issues. Of course, eating moderate amounts of sugar from natural sources such as fruits, sweet potatoes, brown rice, and other whole foods won’t cause detrimental effects on the body. The processed sugars in breads, sweets, and sodas, however, lead to increased anxiety and poor gut bacteria.

While only a small percentage of the population (1%) suffers from celiac disease, 83% of Americans go undiagnosed or are misdiagnosed with other conditions. The only treatment for celiac disease so far is a totally gluten-free diet. There are over 300 symptoms of celiac disease, but common ones include anxiety, depression, headaches, fatigue, and gastrointestinal problems.

Some people don’t have full-blown celiac disease, but simply gluten sensitivity. However, those people who have gluten intolerance may not know it and continue to suffer from the symptoms associated with it. According to this study, gluten can cause anxiety and depression in patients with gluten sensitivity. This occurs because gluten disrupts the digestive system and gut bacteria, causing the misfiring of neurotransmitters and leading to an increase in chemicals such as cortisol.

If you believe you might have a gluten allergy, try cutting gluten from your diet and see how you feel. You can also go to your doctor and have a test done to see if you have celiac disease or gluten sensitivity. Keep in mind that if you do have celiac disease, you will have to read labels vigilantly. Gluten is a common ingredient in many foods.

For people with lactose intolerance, consuming dairy can cause inflammation and irritation in the lining of the gut. The increased inflammation causes the immune and nervous systems to react adversely, which can lead to anxious feelings.

Kelly Brogan, MD, says that in our post-industrial world, “… dairy is homogenized and pasteurized, creating a dead, high-sugar liquid with distorted fats, denatured proteins and unabsorbable or thoroughly destroyed vitamins.” Some people may find relief by drinking unpasteurized, raw milk, but this isn’t a cure-all, either. If you find that you have symptoms such as brain fog, anxiety, or gastrointestinal problems when you consume dairy, cutting it out will be your best option. 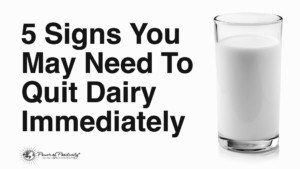 In this study, people with dairy intolerance showed higher rates of mental disorders such as schizophrenia and bipolar. So, eliminating dairy from your diet if you suffer from mental issues such as these might help you overcome them.

Foods to eat if you have anxiety

Since we’ve gone over foods to avoid, we thought we would include some beneficial foods if you suffer from mental disorders such as anxiety. First, you’ll need to go back to the basics when considering what you should consume in your daily diet. Nature gave us certain foods for a reason, so in general, these should make up a large portion of your diet:

These are just some of the foods that can help reduce your anxiety. Try to incorporate these as much as possible in your diet to enjoy the maximum benefits. When you go grocery shopping, try to stick to the outside aisles; the middle of the store typically contains all the processed, packaged foods. Avoid alcohol and caffeine as much as you can. Also, pay attention to how you feel after you eat foods such as dairy or gluten.

A better diet can work wonders in easing symptoms of anxiety, but food doesn’t always take away the problem completely. It requires a combination of changing your thinking, support from family and/or therapists, getting plenty of sleep, and taking plenty of time for self-care.

Many people today suffer from anxiety due to the fast pace of our modern world; always remember to take time out of your busy schedule to tend to your needs! This doesn’t make you selfish – it just makes you human!

Natural remedies such as lavender essential oils and herbal supplements might help as well. You might need to combine them with medication and/or therapy for the best results. Don’t ever feel ashamed to get help for overcoming anxiety. You deserve to feel your best and live a life free of mental anguish. If you’re suffering, reach out for help, even if that means talking to your parents or partner about how you feel. No one should have to suffer in silence

Related Items anxiety anxiety advice anxiety and diet foods that cause anxiety
Power of Positivity uses cookies to give you the most relevant experience. For more information see our Privacy Policy.
Continue
Manage consent