Fear is an emotional trigger that every living creature is somehow rather too intimate or familiar with. It is a survival instinct that can be managed but only with regular practice. Therefore, the moment you tend to feel fear especially the fear of public speaking, then remind yourself that you are in control. Slow, deep breathing is among the many effective ways of calming yourself down in the face of fear. You can also overcome fear by constantly reminding yourself that good things are found on the other side of fear.

The prior analysis of the worst-case scenarios can also help a great deal because the fear of the unknown is what bars many from achieving their life goals. Doing so will help you understand that failure isn’t the end of the road but an opportunity to learn. And this auspicious realization is what will set you free from the mental chains tethering you from reaching your full potential. Without further ado, here are four ways you can overcome your fear of public speaking like the champ you were born to be:

Overcome the Fear of Public Speaking in Just 1 Week

Prepare for Your Speech Beforehand

One of the best ways of overcoming your public speaking fear is through rigorous preparation. When you get in the habit of preparing beforehand, you’ll build a lot of confidence way before taking the podium and addressing your audience. One way you can do this is by reading extensively on the subject you are about to talk about a week later.

Once you feel adequately prepared, feel free to gather a few close friends and engage in a mock speech. Make them understand that by the end of your mock speech, you’ll need their honest feedback on how you performed. Take their honest feedback with a pinch of salt and apply it because that’s the only way you’ll grow as far as public speaking is concerned. Do this for a week and you’ll definitely gain the confidence to shine like the star you are meant to be.

Another effective way of overcoming the fear of public speaking is by actively engaging your audience. It is important for them to be a part of the whole speech since they’ll make things much easier for you. Feel free to throw in a few jokes as long as they are related to your speech.

Jokes have a way of easing up the crowd and at the same time smoothen the few bumps you might hit along the way. Another incredible way of engaging the audience is by telling a short, relatable story related to the subject of your speech. If you aren’t good at engaging the audience, don’t worry much because a week is enough as long as you have your mock audience back at home.

It is quite unfortunate that the contemporary society, more often than not, equates stress relieving with the constant use and abuse of drugs and alcohol. therefore, if you want to get rid of the public speaking fear in a week, then stay away from alcohol and drugs. This is because getting high will only exacerbate the feeling of fear, adding anxiety on top of that. And this is why you’ll need to hang out with positively motivated friends and do something fun like playing soccer or working out before your big day.

And while blowing off some steam the healthy way, you can open up about your fear of public speaking and ask for their advice. You’ll be surprised with how much dimes your high-quality friends will have for you. Good friends will always be willing to lending a hand whenever and wherever they can just so they can see you succeed. And that, in itself, is a good stress reliever.

Write A Few Pointers to Organize Your Speech

A scientific study carried out by an Indiana University Associate Professor and Research Scientist, Prof. Nicole R. Keith, reveals that being organized has a plethora of benefits. Among the top benefits of being organized is lower stress levels and being at peace. 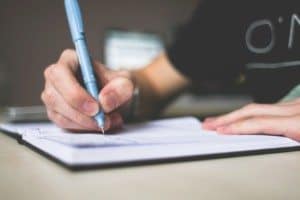 The palpable conclusion was reached after carefully studying the lifestyles of 988 African Americans between the ages of 49 and 65. In her comprehensive report, Associate Prof. Nicole R. Keith concluded that the organized people tend to be happier and healthier than those who weren’t. Emphatically, the same can be applied in your quest to conquer the fear of public speaking by being organized.

Before allowing fear to cripple you, remember one thing: You are the most amazing person in the whole wide world. This is so simply because you are and your uniqueness is indeed your superpower. Keep reminding yourself of this until it becomes a mantra. And once you believe this truth about yourself, you’ll be able to do anything you put your mind to.