When you buy a secondhand couch, you usually find some old candy wrappers and dust under the cushions – nothing out of the ordinary. But for three roommates in New Paltz, N.Y., their experience with buying an old couch went a little bit differently.

After the three college students realized the lumps in the cushions were actually envelopes stuffed with $40,000 in cold, hard cash, they decided to return the money to its owner (after a bit of discussion, of course). I mean, if you came across that much money, you’d probably hesitate a bit on giving it back, too!

The story unfolded when Reese Werkhoven, Cally Guasti and Lara Russo realized that they were literally sitting on cash – and a lot of it. Two months before, they’d bought the couch for only $20 at a local Salvation Army.

“It had these bubble wrap envelopes, just like two or three of them,” Werkhoven tells CBS New York. “We ripped them out and [I] was just like freaking out, like an inch and a half of $100 bills.”

As they continued to search under the cushions, they came across even more envelopes, not believing what they were seeing.

“I almost peed,” Werkhoven told SUNY, New Paltz’s student newspaper The Little Rebellion. “The most money I’d ever found in a couch was like 50 cents. Honestly, I’d be ecstatic to find just $5 in a couch.”

Not yet knowing who it belonged to or what to do with the money, the three friends started talking about what they should do with it. Werkhoven said he would buy his mom a new car. Russo talked about going on a cross-country road trip. However, when they came across an envelope with a name on it, their plans started to take a different turn.

“We had a lot of moral discussions about the money,” Russo tells Little Rebellion. “We all agreed that we had to bring the money back to whoever it belonged to … it’s their money — we didn’t earn it. However, there were a lot of gray areas we had to consider.”

They went to their parents for advice, and of course, they told them not to spend the money. The students then found a phone number for the couch’s previous owner, and discovered why they’d stashed so much money in the couch in the first place.

The trio drove to a woman’s house, which was “a rustic home in a rough neighborhood,” according to the school newspaper.

“I think the part of this whole experience that cleared away my prior thoughts and worries was when I saw the woman’s daughter and granddaughter greet us at the door,” Werkhoven tells the blog. “I could just tell right away that these were nice people.” 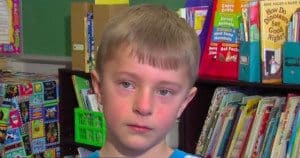 The woman, who chose to remain anonymous, revealed that she had been saving money due to her late husband’s concerns that he wouldn’t always be around to care for her. He had a heart condition, and didn’t want to leave his wife with nothing when he passed away.

The money was basically their combined life savings, which included wages from the woman’s job as a florist.

She slept on the couch for years, but when she started to have back problems, her daughter and son-in-law bought her a bed. Thus, they decided to sell the couch since it was no longer useful. However, they had NO idea about the $40,000 hiding in the couch!

“This was her life savings and she actually said something really beautiful, like ‘This is my husband looking down on me and this was supposed to happen,’ ” Guasti tells CBS NY.

The woman was so moved by the kids’ honesty that she decided to reward them with $1,000 each.