“Love and compassion are necessities. Without them humanity cannot survive.” – Dalai Lama

As children, hate, violence, apathy, and greed were as foreign to us as having to pay bills just to survive. We played with other children on our street, helped one another when we tripped and fell.. Indeed, we really had no idea about the horrors lurking outside our neighborhoods. We simply did what came naturally to us. And we did not know we would soon become influenced by people not so familiar with basic human compassion. Before the conditions of a largely imbalanced society, we actually operated on kindness, peace, and understanding.

Can we reorient our minds back to a place where we’re living with more love, trust, and compassion in life?

The answer is yes.


Here are 3 ways to be more compassionate to others (and yourself!)

If you have practiced or read up on meditation, you know that the act of meditating literally creates new pathways in your brain, and rewires the neurotransmitters already in existence. It allows you to view the world through different lenses, and you can choose from a variety of different meditation practices depending on what you want to achieve. To cultivate a more compassionate brain, psychologists have discovered through many studies that loving kindness meditation can actually increase altruism in people. Yep, that’s right. You can train your brain to become more compassionate through a simple meditation sequence. Even if you have never felt very compassionate in your life, you can actually develop the skill relatively easily.

In the study conducted by Psychological Science, the researchers gave half of the participants a 30 minute audio recording that they listened to once a day for two weeks. The recording was an adaptation of the Buddhist practice of loving kindness meditation. Scientists called it compassion meditation. In the recording, participants were guided to extend compassion to themselves, friends, acquaintances, and anyone they had encountered troubles with.

After the two week period, the participants played an online game intended to calculate their selflessness. The game consisted of three players, one (the participant) who had $5, another who had $10, and a third who had no money. The computer-generated player with $10 was asked to share some of his money, but only gave $1 to the impoverished player. Then, the participant could choose any amount of his $5 to give to the poorest player, and whatever amount he choose would be doubled by the richest player. For example, if the participant decided to part with $2, the wealthiest player would have to give up $4.

The results from the game revealed that people who had received the compassion meditation training spent nearly twice as much as others who received a different type of training designed to get participants to think about a stressful situation in a less distressing way.

Also, the brain activity of the participants reflected the increase in altruism as well. Brain scans revealed that people who underwent the compassion meditation training had heightened activity in neural networks responsible for understanding suffering of others and regulating emotions.

So, practice loving kindness meditation for just thirty minutes a day. Then, you can reap the benefits of this exercise and become a more compassionate person. You can also utilize two other methods to help you foster more empathy towards others.

Put what you’ve learned in your meditation practice to good use and fill other people’s lives with more compassion. Not only will it make you feel great to extend kindness to other people, but it will improve their lives as well. Think about it – what if you smiled at a stranger every single day? This would encourage them to smile, and might even change their outlook on the world as well. Ripples create waves, so remember that when you go out in public and notice other people who look worried or stressed.

All of us can offer some sort of help to other people, whether through our words, actions, or smiles. After doing a nice deed for someone on a consistent basis, it will start to become second nature. 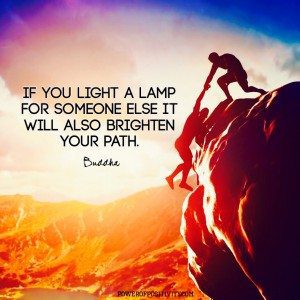 3. Listen to Other People More Often

Do you spend time relating to other people and putting yourself in their shoes?

If not, try to really understand your family member or friend who has been going through a rough time, or just needs advice about something. You can relearn compassion in this way by taking the focus off your own struggles for a while. Instead, try giving your attention to someone else in need. Everyone goes through some sort of troubles in life, but you could be the one to relieve some of the stress by simply opening your ears and heart.

Add value to this post with your tips to help grow compassion in the hearts of others.  We need it now more than ever!

2 thoughts on “3 Ways to Be More Compassionate”