In our world it can be difficult to sustain human connection outside of technology. People can be lonely even when they’re in a relationship. Some people cheat because they want a self-esteem boost. Others like the thrill of getting away with an affair. Whatever the reason, there are always signs that your significant other is being unfaithful.

1. S/he is increasingly active online

10% of affairs begin on the internet. 40% of online flings turn physical. We all love connecting with others on social media. But a cheater can easily use an online account to strike up a flirty conversation with someone outside their relationship.

Over time, friendly messaging turns into a real life attachment. Unfortunately, it’s all too easy to hide an internet affair.

2. S/he has mysteriously become a workaholic

Staying late at work? Getting too excited over those boring business trips? Your partner might not be telling the whole truth. 36% of men and women have admitted to having an affair with a coworker.

The workplace has its own social ecosystem, separate from significant others. It’s a breeding ground for flirtations that can turn into something more serious.

3. S/he has cheated before

As the saying goes, old habits die hard. Former cheaters are 350% more likely to cheat again than people who have never cheated.

If you know that your current partner cheated on his/her former partner, proceed with caution. It can be hard to reform when you’ve gotten away with an affair once before. 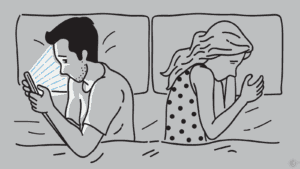 4. S/he is an effortless liar

Some people lie so smoothly, they can convince you that anything is true. They seem completely unfazed when they get caught in a lie.

Pay attention to these signs. Even if the lies you catch are insignificant, your partner’s skillful fibbing indicates that they’re not afraid to look you in your eyes and tell an untruth. S/he likely does not feel guilty about lying and would not feel bad about having an affair.

As a kid, your parents are your first template for how relationships should work. If one or both of your S.O.’s parents were constantly unfaithful, s/he may have absorbed that “lesson” at an early age.

New York City therapist Gilda Carle, Ph.D. describes this as “mirroring” the behavior of your first role models. It can be hard to break a cycle that was ever-present in your upbringing.

Maybe your partner just got fired or took a pay cut at work. Maybe they are self-conscious about their body, or frustrated about something else that’s going on in their life.

Periods of low self-esteem can lead to infidelity. When we’re feeling down, we want to be validated. We want to feel worthy. Often that quest for “validation” manifests in an affair.

Of course, your partner experiencing a rough patch does not necessarily mean you’re being cheated on. It’s important to attend to his/her emotional needs during a vulnerable time.

7. S/he is vigilant towards you

Suddenly your partner is very concerned with your schedule. S/he is always asking when exactly you’ll be home from work. In an act of projection, s/he might even start accusing you of unfaithfulness.

Your S.O. keeps tabs on you and is careful not to let you near their cell phone and/or personal computer. This is a red flag that your partner is hiding something.

None of these red flags are a 100% correct indicator that your partner is cheating on you. You should be certain before you make any accusations. But if the above issues persist, you might want to dig a little deeper. These days, it’s easier than ever to step out on your relationship. Apps allow people to hide incoming texts and calls. Websites facilitate secret romantic arrangements.

You deserve to be with someone you can trust. And once destroyed, that trust is difficult to rebuild. Unfortunately, infidelity infects romantic relationships of every type. Although you shouldn’t be paranoid, you should not assume it could never happen to you. Do your part to carry on an open, honest, and loving relationship with your partner. Don’t be shy about confronting them with your emotional needs. And remember, it is never your fault if you get cheated on.