On a snowy day in Milwaukee, bus driver Kaniquka Jackson made one man’s day a little better. As usual, she parked at a bus stop off Route 14 near the Bayshore Town Centre in Glendale.

While waiting for people to board the bus, she noticed an elderly man walking through the snow. The snow had begun to pile up, and the man tripped while crossing a snow bank. Kaniquka immediately jumped out of her seat and ran out into the cold, snowy conditions to help him.

She and another bystander quickly got him to his feet. Kaniquka then took the man’s walker onto the bus for him, and came back to help him on board. In the viral video, you can see her walking with an arm around the man for support. After ensuring he boarded safely, the kind-hearted bus driver told him to take a seat.

She showed him where she’d placed his walker, then asked if he was alright. She asked him if his knee hurt, and if she should call for help. However, he assured her he was okay. Luckily, he’d only taken a light fall, but without Kaniquka’s help, the situation could’ve been much worse.

The Milwaukee County Transit System (MCTS) honored the bus driver for her kindness, posting the video on their website. The video quickly went viral, being shared all over the world. Actor Christopher Meloni, who plays a detective on Law & Order SVU, even reposted the story. He retweeted the MCTS video and hashtagged it “superhero.”

The bus driver’s compassion and quick response have certainly earned her recognition. People like Kaniquka make the world a better place by simply reaching out a helping hand. If we all look out for others like this bus driver did, we can create so much positivity together.

Luckily, so many good people live on this planet, and you can always find kindness if you look for it. You may not hear about it on mainstream news, but we will always share the positive stories with you. The people below are also everyday heroes, making the world brighter one act of kindness at a time. 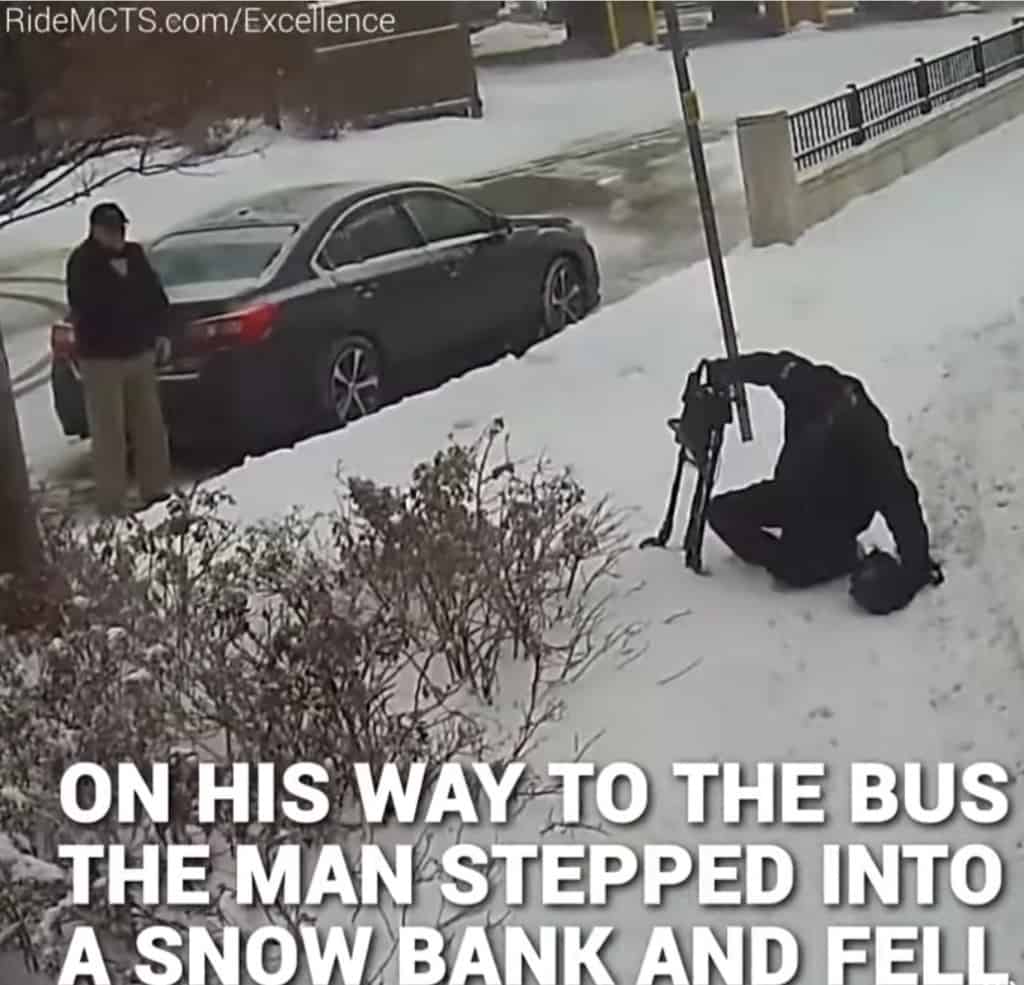 Other people who have made a positive impact on the world

1. Instead of asking her parents for birthday presents, this little girl asked for donations.

She wanted to donate toys and birthday supplies to The Happy Birthday Project, an organization that throws birthday parties for children in need.

2. This woman, Ms. Sandy, decided to show her gratitude for police officers by treating them all to Subway for lunch.

3. As a huge fan of Anthony Bourdain, one kind woman created a movement called #Bourdainitforward.

It encourages people to do good deeds involving food or mental health/suicide awareness. She decided to spread a little kindness by buying dinner for a single Dad with three children!

4. These kind-hearted young boys wanted to make the world a bit brighter by handing out flowers at a nursing home.

5. A barbershop in Houston, Texas, dedicates time each Monday to giving haircuts to the homeless.

Hairstylists travel around the city with their supplies to do free hair appointments on the spot.

6. A marathon runner in Honduras didn’t care about winning the race.

He helped his blind friend make it to the finish line by tying a string around both of their hands so they could stay together.

7. At a Dairy Queen drive-thru in northern Minnesota, 900 people paid for the car behind them.

The pay-it-forward chain lasted for a whole two-and-a-half days!

Fans helped made sure it happened, helping carry her into the arena where she watched the game from her bed.

9. Police officers in Detroit got a call about a man standing on an overpass attempting to take his life. Truck drivers passing through the area lined up underneath the bridge to save him.

This photo does show the work troopers and local officers do to serve the public. But also in that photo is a man struggling with the decision to take his own life. Please remember help is available through the National Suicide Prevention Lifeline at 1-800-273-8255. pic.twitter.com/RBAlCIXT1o

10. An anonymous patron at a restaurant paid for a man’s meal.

What made it even more special was the fact it was his birthday lunch!

It is stuff like this humans that makes me still have faith in humans – and to even make it better it was a birthday lunch with wife and baby and no one knew! Thanks anonymous nice person! from pics

11. A restaurant posted a sign on its doors saying they’d be closed on Thanksgiving.

However, they’d be eating inside with friends and family. The owners invited anyone who didn’t have family or needed a meal to dine with them.

12. In the brutal winter months, a warm coat, gloves, and a hat are essential.

Homeless people are very vulnerable as many don’t have access to these items. In one city, someone decided to hang bags full of winter clothes on street posts for anyone needing them.

13. Unfortunately, one man’s bank account got hacked right before a father-son camping trip.

He had only enough money to get to the campsite and back. When he woke up the next morning, a nearby camper had left $20 on his windshield. Whether you call it karma or fate, humans are pretty amazing sometimes!

The day before I was to take my son camping my bank screwed me over. We left for our trip with just enough cash for gas there and back. But some wonderful strangers paid us a random act of kindness. We found this on our car in the morning. from pics

14. After his house flooded in Hurricane Sandy, one man and his pregnant wife had to move out.

When they came to check on their house, a stranger had left money in an envelope on their door.

Random Act of Kindness, My pregnant wife and I found this on our door after checking on our house at night. No contact info, no name or anything. I want to thank this person and hug them for making us happy.(House flooded from Hurricane Sandy) from pics

If you take the time to notice, you’ll see that this world is overflowing with kindness and love. Sure, it has its problems, but the good far outweighs the bad. Some people have dedicated their whole lives to feeding, clothing, and helping people in general.

However, every little act of kindness, no matter how large or small, creates a ripple effect. No act of selfless service is too small. If we want to create a more harmonious world, let’s start today by being the change we wish to see.

Like these incredible humans, we can all make a difference somehow. Have you ever witnessed or taken part in an act of kindness? We’d love to hear about it in the comments!