Much of how the body’s chemistry works was not understood very well until the technology to understand it came into use in the 20th century. Vitamins were one of the things undiscovered until then along with their benefits and their origins. Vitamin D was one of them.

However, new discoveries come to light every day. Research is showing that Vitamin D, other than supporting bones, benefits other organs, blood vessels, and glands. It also works in the brain and as a neurotransmitter. [1]

The vitamin’s deficiency is a major problem for many Americans. Not only is the population susceptible to bone problems like osteoporosis, but dementia, insulin regulation, and cardiac troubles as well. What is this vitamin, and why is it so important to the body?

Vitamins are organic compounds which can be obtained from foods and drink. They can be made inactive by light, heat, and acids from storage and cooking. A tiny amount of these nutrients is all that’s necessary for the body to use them to its maximum benefit.

Vitamins support the bones, help heal wounds, and support the immune system. The transform food into energy and repair damage to the cells. Vitamin D helps the body absorb calcium from food instead of robbing the bones of it.

The vitamin is fat-soluble. This means that, unlike water-soluble nutrients, this vitamin needs a carrier to get it throughout the body. The nutrient is digested through the stomach and small intestine. It’s then escorted by a protein to the bloodstream, where it makes its way to the parts of the body requiring it. [2]

Foods from which the vitamin comes include fatty fish such as salmon, tuna, and sardines. It also comes from cod liver oil, egg yolks, and beef liver. The fish are excellent sources of the vitamin, but eating them every day would be necessary to get enough.

How Does It Work?

Vitamin D is made when the UV rays in sunlight hit the skin. A cholesterol carried in the skin converts the vitamin. And, it then travels to the liver and kidneys for further metamorphosis.

Alternatively, for many years, doctors have instructed people not to stay in the sun too long for fear of getting skin cancer. The winter months cheat Americans of this vitamin, so people have naturally developed a lack of this most important vitamin. Doctors of today now prescribe supplements in order to give patients a good chance at optimal health.

However, research is now finding this vitamin’s receptors in places like organs from the heart to the prostate, muscles, blood vessels, and the glands of the endocrine system. These and the body’s tissues contain proteins to which this vitamin binds, enabling the better absorption of calcium.

Moreover, research is discovering that lack of this vitamin is responsible for many health conditions ranging from obesity to heart diseases and from diabetes to Alzheimer’s and some cancers. Additionally, over 200 genes are affected by the lack of this vitamin. [3]

It’s extremely rare that this vitamin is toxic. However, if too much builds up in the body’s fat tissues, a resulting calcium buildup will cause urinating too much, weakness, and nausea and vomiting.

Factors Affecting The Body’s Amount Of The Vitamin

We discussed above the formerly advised amount of sun to get and still remain healthy. Other factors affect how the production of the vitamin such as cloudy days preventing enough sunlight to hit the skin. Some of the factors are:

As the body ages, it works harder to produce Vitamin D.

The darker the skin, the longer people have to stay in the sunlight, up to five to ten times longer.

The sun shines more on top of a hill than it does on flat lands. The higher people are, the more of this vitamin they make. [4]

This vitamin circulates through the bloodstream for 24 hours. After that, your body only stores the fat cells for two months. As the body needs more, it’s then released back into the bloodstream for use. This storage and release mechanism continues for months, after which the body is depleted. This is if no new sources of the vitamin enters the body, either through food or supplementation.

D-ficiency is occurring in billions of people worldwide. The deficiency is reaching epidemic proportions, so many consider it odd that the World Health Organization hasn’t blown the trumpet of warning.

Before the advent of shopping malls, office buildings, and three-piece-suit clad traveling salesmen, people earned their bread in the fields. They never had a Vitamin D deficiency. In a stunning turn-around, however, science is now telling us that today’s farmers, fishermen, and other outdoor workers have more cases of cancers brought on by D-ficiency than indoor workers.

Furthermore, those living in the Middle East are being reported as deficient in the vitamin. In that bright, sunny area, pregnant women and the elderly are the most affected, although everyone is suffering some degree of deficiency. Add to this the dark-skinned peoples of Asia and Africa, and you can see why D-ficiency is an epidemic. [5]

D-ficiency can also be found in those with intestinal challenges to absorbing fat, those with liver or kidney diseases, as well as in those beginning to age. Some medications limit the availability or actions of the vitamin. Living north of the 37th parallel provides less than the recommended amount of sunlight to make the vitamin.

Who Is At Risk Of D-ficiency

Persons at risk of Vitamin D deficiency are infants being breastfed because mother’s milk is not rich in Vitamin D. The obese are susceptible due to the fat cells not binding to the vitamin so that it isn’t transported to the bloodstream. Those with osteoporosis, liver, or kidney diseases, Crohn’s disease, and those with lymphomas are at risk of D-ficiency. [6]

D-ficiency causes serious bone problems such as osteoporosis, weak bones, and fractures in seniors. Children get rickets which means the bones are soft and bend instead of breaking. Adults get osteomalacia which causes bone pain in weak bones and muscle weakness. [7]

D-ficiency has been noted as having a part in rheumatoid arthritis, multiple sclerosis, asthma and autism in childhood, erectile dysfunction, and baby’s immune system in pregnancy. [10]

The answer is two-fold. The first step is to increase time in direct sunlight. Cloudy days and the government’s use of planes spraying something in the air to decrease our abuse of the ozone hamper that solution. People must find a way to get enough direct sunlight to make Vitamin D.

The second step is in the diet. People would have to eat one salmon steak, one cod, and two eight-ounce cans of tuna in order to get the minimum amount of the vitamin into their systems. Drinking a quart of fortified milk with a bowl of fortified cereal would do the same job. [8]

Food, however, can only give adults between 40 and 45 international units or IU per serving. To get the recommended daily allowance of the vitamin, adults would have to eat fish at every meal and for snacks, along with fortified cereals and dairy products which means six times per day.

Supplementation is another solution. Presently, the vitamin content of supplements is 1,000 to 2,000 IU. This is quite enough for the average adult.

How Much Is Enough?

Medical experts are at odds with each other over the ideal amount of the vitamin for children and adults. However, the National Institutes of Health recommend the following amounts. 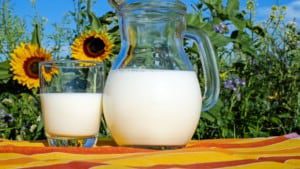 It’s surprising that such a vital part of our health wasn’t discovered or researched until the 20th century. It isn’t surprising that science has used new technologies to find a multitude of uses for the vitamin. They’ve even found that it beneficially affects colds and flu.

Vitamin D, although classified as a vitamin, acts in the body as a hormone and a steroidal one at that. It affects everything in the body from the immune system at the base to the brain at the top. It’s lack severely damages the body, yet its lack is a world-wide epidemic.

It may be a challenge to find enough of the vitamin in our food and the amount of sunlight we get. Press on, though, because the vitamin will improve your quality of health and life.