Many people don’t realize that they’re confronting someone who is an emotionally abusive person. These people tend to hide their true identities and are able to charm the people that they’re not actively abusing. It’s important to know the behaviors of someone who is emotionally abusive. Psychologists have put together the top behaviors that reveal someone to be an emotional abuser.

Emotional abuse is no joke as it includes “… verbal assault, dominance, control, isolation, ridicule, or the use of intimate knowledge for degradation,” according to a study by the  US National Library of Medicine National Institutes of Health.

Here Are 8 Behaviors Of Someone Who Is Emotionally Abusive

“The only person that deserves a special place in your life is someone that never made you feel like you were an option in theirs.” – Shannon L. Alder

One of the most important and major signs of an emotionally abusive person is their ability to gaslight people. Gaslighting is a term that means a specific form of emotional abuse, where the abuser makes “… you doubt yourself, your intuition, and your reality” in order to keep control over them, says relationship expert Susan Winter. Gaslighting is always a sign that someone is an emotional abuser and it should never be taken lightly.

Not every person who experiences jealousy is an emotional abuser. However, someone who is emotionally abusive will have extreme bursts of jealousy. They will be jealous of their partner’s friends, family, co-workers, or anyone else that their partner comes in contact with. If their partner shows any attention towards anyone that is not them, the abuser becomes enraged with jealousy.

Verbally humiliating someone is a form of emotional abuse. Someone who does this tends to do it in public and will make sure they do it in a way that they can brush off as “just joking around”. But the damage that it does is no joke. This behavior is indicative of more outwardly sinister emotional abuse. If someone doesn’t listen to their partner when they express discomfort, then it’s a red flag.

If someone feels like they always have to walk on eggshells around their partner, then that’s a red flag. Someone who is emotionally abusive will pick fights with their partner. The fights are never designed to be won. Someone who is emotionally abusive will know just how to manipulate the argument so that they seem like the victim. They also make it seem like the other person has to apologize, even if they did nothing wrong. 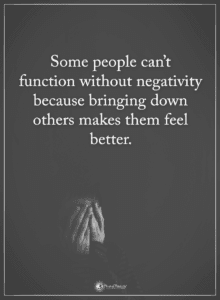 If you’re not with them, then you’re against them. Emotional abusers have what is called “black and white thinking.” Neutral responses are often categorized as openly hostile. If their partner isn’t actively praising them, then it must mean that they hate them. It can make for a very turbulent and confusing relationship for the partner. If someone is unable to approach a situation with compromise or nuance, then there is a good chance they are an emotional abuser.

When you’re in a relationship, affection is how you connect with your partner. However, emotional abusers will weaponize this affection in order to get what they want. If their partner is expressing autonomy, or isn’t behaving in a way that they want, they will give them the cold shoulder. These types of people will withhold love and affection from their partners in order to manipulate them. This can create a codependency and complacency in their partner, even without their knowledge.